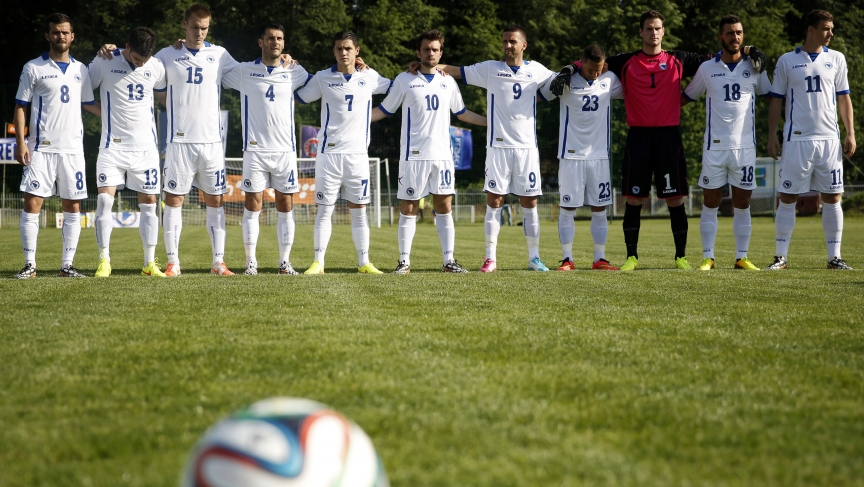 Bosnia-Herzegovina will play its first World Cup match versus Argentina this Sunday and Akif Cogo will be watching and cheering in St. Louis alongside tens of thousands of fellow Bosnians.

St. Louis, Missouri, is home to the largest Bosnian community in the US — some 70,000 strong — and Cogo said everyone there is pumped for Bosnia's first appearance at a World Cup.

“The whole community is buzzing about this. Shops are full of jerseys, every single Bosnian restaurant or bar will broadcast games, it's definitely something that cannot be avoided in conversations,” Cogo said.

Besides being a soccer fanatic, Cogo is also the author of a guide to Bosnian St. Louis. Many Bosnians in St. Louis are refugees who fled the ethnic violence of the Balkan wars of the 1990s.

But now, Cogo said, the Bosnian national soccer team is a model of unity — unthinkable two decades ago.

“Now we have a very diverse group of young men there: Muslims, Orthodox Christians, Catholics playing together as a unit,” Cogo said. “Now” is the key word. For decades after the war broke apart the country, pitting neighbor against neighbor, a unified and diverse team seemed like a distant dream.

“But this team is showing that regardless of their differences, they are able to work as one unit,” Cogo added.

You can see the spirit of unity through the actions of the co-captain of the team, Zvjezdan Misimović. Misimović is an ethnic Serb who was born in Germany to Bosnian Serb parents. After playing in the Serbian youth leagues, Misimović chose to play for the Bosnian national team.

Cogo will never forget, after a World Cup qualifying match against Lithuania that the Bosnian-Herzegovina team won, it was Misimović who stood in front a crowd of 50,000 fans in Sarajevo as they cheered.

“He didn’t say anything, but just started a chant that says something like, ‘Who’s not jumping hates Bosnia,’ and he started jumping on the balcony he was on and 50,000 people followed,” Cogo said.

Of course, Misimović is not the only player who exudes Bosnian pride. Striker Edin Džeko was just a child during the war, which lasted from 1992 to 1995. He spent his childhood playing soccer amid shelling and airstrikes in Sarajevo. Those memories might seem distant to the striker today, who plays for Manchester City in the English Premier League, but he hasn’t turned his back on Bosnia.

“He’s involved in the community back in Bosnia, he’s helping out through UNICEF, he’s got his own foundations,” Cogo said. “Even the recent flooding, he was the one that was visiting places while in Bosnia during World Cup preparations.”

Most of the players on the squad were just toddlers during the war. Many left the country as child refugees. Some, like Misimović were even born outside of Bosnia. And many of those who lived abroad and played abroad have had the opportunity to play for other national teams.

“But all of them opted out to play for Bosnia and they are literally showing what unity can do,” Cogo added.

For many Bosnians, this team playing in the World Cup is much more than a soccer tournament.