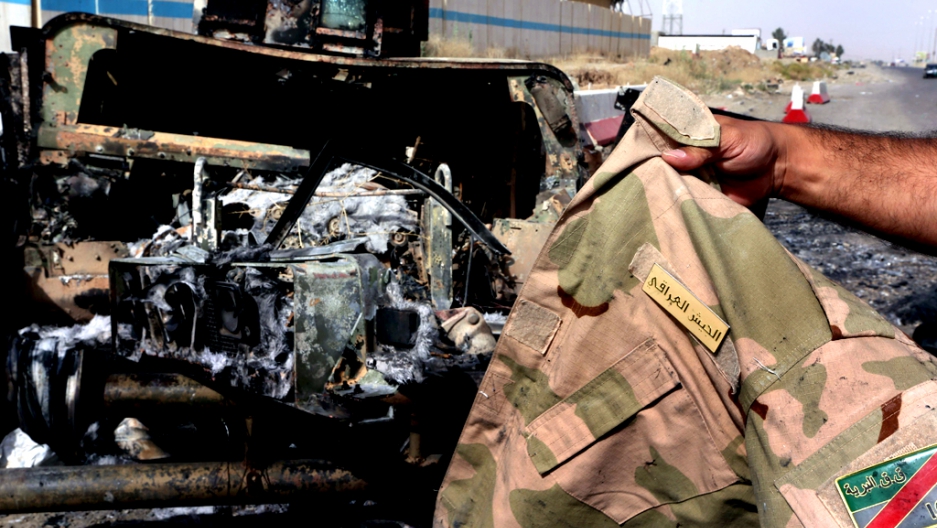 A man displays an Iraqi army jacket in front of a burnt out US-made Iraqi army Humvee vehicle east of the city of Mosul, on June 11, 2014, a day after Sunni militants including fighters from the Islamic State of Iraq and the Levant (ISIL) overran the city.
Credit: SAFIN HAMED
Share

After months of violence, unrest and a rising death toll, Iraq is now disintegrating.

Within a matter of days, the Sunni militant group Islamic State of Iraq and the Levant (ISIL) and its allies have overrun the second largest city in Iraq — Mosul — and several other towns. They now have their sights set on Baghdad.

Several reports suggested Prime Minister Nouri al-Maliki's security forces discarded their uniforms and weapons, fleeing cities without even engaging ISIL, despite the fact that they far outnumber the militants. An off-shoot of Al Qaeda, ISIL evolved from Al Qaeda in Iraq and has been active in Syria since last year, fighting not just Syrian President Bashar al-Assad's forces but other more moderate Syrian rebels as well.

Al Qaeda and ISIL went through an acrimonious break-up earlier this year, when ISIL refused to withdraw from Syria as ordered by Al Qaeda's high command. After seizing Mosul this Tuesday, the militants reportedly looted the equivalent of over $420 million from the city's central bank and also seized American-made Iraqi equipment, including Humvees.

More from GlobalPost: The militant group taking over Iraq and Syria right now is seriously scary

GlobalPost asked Charles Lister, a visiting fellow at the Brookings Doha Center, about the current events, ISIL's goals and its shadowy leader Abu Bakr al-Baghdadi. The United States, it should be noted, has a $10 million bounty on Baghdadi (listed here under his birth name).

For people who haven't been following the breakdown of security in the country: What's happening in Iraq?

[After Iraq's parliamentary elections at the end of April], ISIS knew that conditions on the ground were ripe for an all-out push on the Iraqi government's weak points. The organization's extensive underlying roots in Mosul afforded it probably the best potential and it seems highly likely that a deal was struck with Sunni security forces to tacitly exchange control overnight.

ISIL, of course, evolved out of Al Qaeda in Iraq, but earlier this year the two groups split due to ISIL's extremism and involvement in Syria. What is ISIL's current relationship with Al Qaeda? Do you foresee them becoming rivals or adversaries like the rebel groups within Syria fighting each other?

Ever since mid-2012, the ISI (the Islamic State of Iraq) — and from April 2013, ISIS [as the group changed its name when it began fighting in Syria] — has been on a steady period of recovery and its military potential has increased substantially. From mid-2012 to mid-2013, a key focus was placed upon re-strengthening the senior leadership and building up the younger recruitment base. By mid-2013, ISIS had become a military organization capable of carrying out intensive operations across Iraq, including in key urban areas seemingly at will.

Over the past 12 months, ISIS seems to have been putting into practice what it has always aimed to achieve — acquiring territorial control, governing populations and posing genuine threats to the legitimacy of localized and national government. Taking control of the second largest city in Iraq sends a very serious message to the Maliki government in Baghdad and it now seems quite likely that Baghdad itself could be the next main target.

ISIS and Al Qaeda are total rivals, with both organizations frequently accusing the other of being illegitimate and not sufficiently religious. After all, Al Qaeda affiliate Jabhat al-Nusra and ISIS are actively fighting each other in Syria and that dynamic, which has been active for several months already, has fundamentally shaken the state of jihadism across the world.

What is known about ISIL's leader, Abu Bakr al-Baghdadi, and his goals in the Middle East? There were photos reportedly showing ISIL fighters bulldozing the boundary between Iraq and Syria. Does ISIL's goal of creating an Islamic caliphate in territory seized from those countries actually seem like a possibility at this point?

Baghdadi was born in Samarra in 1971 as Awwad Ibrahim Ali al-Badri al-Samarri. He claims to be a direct descendant of the prophet Mohammed. Unconfirmed information, much from jihadist sources, claims he has considerable religious familial roots and that he is a student of Islamic history. It seems likely that Baghdadi held a position within the Islamic community when the US invaded Iraq in 2003 and some time later he became involved in the Islamist insurgency in eastern Iraq, possibly Anbar.

Sometime in the mid-2000s — likely in 2006 — he was detained by US forces and held in Camp Bucca, where it appears he established relationships with Al Qaeda. Following his release, Baghdadi rose in prominence within the organization, eventually acceding to leader, or emir, in 2010. As far as I’m aware, there is no evidence that Baghdadi has ever fought abroad, apart from in Syria since 2013.

Before the current events in Iraq, President Barack Obama was considering sending more weapons to moderate rebels in Syria. If ISIL can snatch equipment from the Iraqi army, which is theoretically more organized than Syrian moderates, is there really any way of assisting the Syrian rebels safely?

Ironically, these ISIS gains in Iraq may help push the US to definitively enhance its level of military assistance to the moderate Syrian opposition. An emboldened ISIS, which appears now to have almost established a mini-state across the Iraq-Syria border will pose an increased threat to the capacity of Syrian opposition forces to fight on two fronts: against ISIS and against the regime. Without additional support, the chances of them maintaining an effective fight against the government will reduce somewhat.