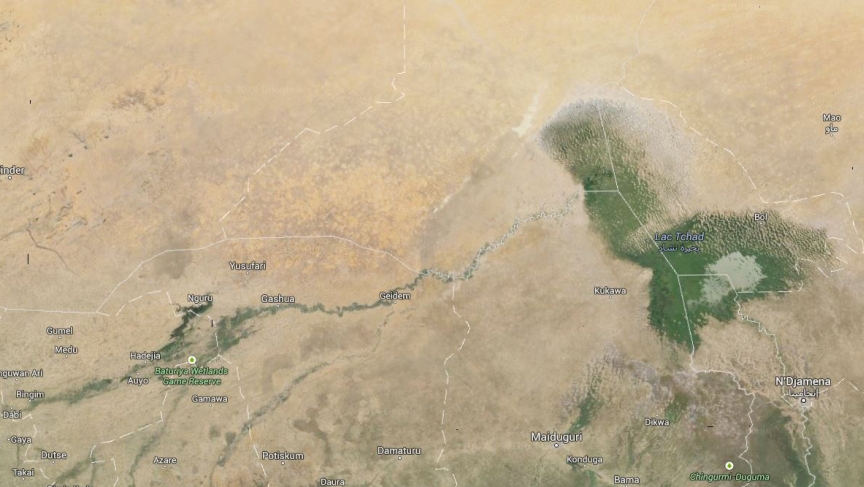 Lake Chad, which once straddled the border of Nigeria and several neighboring countries, has shrunk by 90% in recent decades due to drought and overuse of its water, contributing to conflict and poverty throughout the region. Green areas are the historic extent of the lake, while the grey in the lower right is the lake's current area.

Two months after more than 200 schoolgirls were kidnapped by Islamist extremists in Nigeria, the hunt for the girls has gone largely nowhere and the group Boko Haram continues to terrorize the northeastern part of the country.

Just within the last week, the government says, more than 6,000 people fled their homes after Boko Haram militants stormed at least four villages and killed hundreds of people.

So what fuels Boko Haram?

The group touts an extreme form of Islam and rails against Western influence in West and Central Africa. But, as always in such conflicts, the picture is more complicated than just a clash of religion and culture.

Erika Eichelberger, a reporter for Mother Jones magazine who travelled to Nigeria earlier this year, says the organization is also fed by poverty, which in turn is fed by spreading environmental crises.

“The north of the country has been in a state of environmental disaster for decades,” Eichelberger says.

Years of drought depleted the land in northern Nigeria at the end of the last century, she says, while the country’s exploding population has added millions of people and animals to those already dependent on that same land.

Then there’s the near-disappearance of Lake Chad, one of the biggest lakes in Africa. The lake used to nourish thousands of square miles of northern Nigerian land, but drought and overuse of its water have caused it to shrink by 90 percent in recent decades.

Eichelberger says there are no direct lines between these environmental crises and the ideology and tactics of Boko Haram. And she doesn't deny the role of religion in the group's appeal.

But she says the ecological devastation is causing severe poverty, and that the government has identified poverty as a huge factor in Boko Haram recruitment.

"Desperate people (look) for someone to blame," she says.

Still, Eichelberger says, the government seems to be doing little to address these root causes.

“Nigeria at the moment doesn’t really have any programs rolled out in a serious way to address poverty and agricultural destruction,” she says.

“You could ask (the same) question about many areas of policy,” she says. “‘Why haven’t things gotten off the ground?’” There are conferences, discussions and programs, she says, but “the government is quite corrupt.

And yet, the connection between environmental crises and insecurity is increasingly common, with well-established links in recent years in places like Syria, Egypt, Mali and Sudan. Both the Pentagon and the UN’s climate science panel have warned that climate change could increase violent extremism.

Awareness of links like those in Nigeria are absolutely growing, Eichelberger says. “What to do about it is obviously harder.”