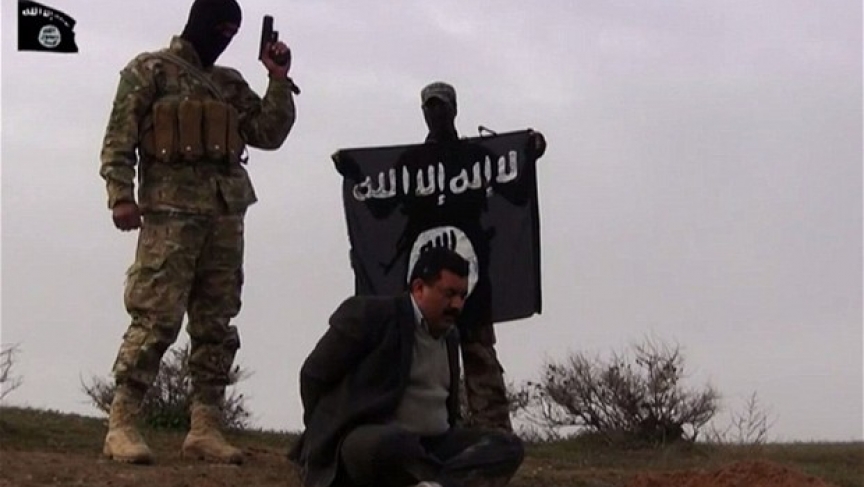 ISIS imposes its own form of summary justice, as shown in this still from an ISIS video, allegedly showing events in Mosul this week.

After stunning successes in northern Iraq this week, Islamic militants are marching on Baghdad. Heavy fighting has been reported in Samarra, just 70 miles north of the Iraqi capital.

The main insurgent group is the Islamic State in Iraq and Greater Syria, known as ISIS or sometimes ISIL for short. (See why two different acronyms.) The group's goal is to set up a caliphate, a pure Islamic state based on sharia law.

ISIS is a descendant of al-Qaeda in Iraq (AQI), the group that once fought US forces. “It’s had a lot evolutions and transformations over the years,” says Aaron Zelin, a fellow at the Washington Institute for Near East policy, and a self-professed "jihadologist."

Currently ISIS is out of favor with al-Qaeda proper.

Zelin says they have had a big resurgence over the past year. “The biggest turning point was in April 2013, when they decided to participate openly in Syria, in the war against the Assad regime.” Zelin argues this gave them new lines of communications — access to weapons they could capture from the Syrian army, as well as weapons and money from foreign donors. It also, he says, gave them a surge of recruits from around the Arab world and beyond.

A lot of these resources were then transferred back into Iraq. In July 2013, they pulled off a massive jailbreak at Abu Ghraib. That allowed a lot of individuals — taken off the streets during the surge of US forces — to get back onto the battlefield. They brought with them a lot of experience and expertise.

Zelin says over the last six to eight months, they’ve emerged as a force, able to take smaller villages, then cities like Fallujah and Ramadi.

“They’re definitely stronger than they were last decade,” adds Zelin, “and they’ve been a lot smarter in some ways in dealing with local populations.” He says they’ve learned from the backlash they suffered from their previous severity. “They’ve been trying to do a lot more outreach, and social services” such as providing medical care and welfare services to local populations. Zelin says they’ve also reached out to a lot of former opponents and allowed them to “repent.”

However, ISIS has not relaxed its vision of the Islamic state on Earth. A new manifesto was published in Mosul Thursday, advising the population of the new rules in town. Infractions will result in the loss of hand or head, and for some crimes: crucifixion.

“It’s a policy of carrots and sticks,” Zelin explains.

Not much is known about the group’s shadowy leader, Abu Bakr al-Baghdadi. He is believed to have been a religious cleric who lived in the Samarra region just north of Baghdad prior to the US invasion in 2003. It’s uncertain when exactly he joined up with Zarqawi and al-Qaeda in Iraq, but Zelin says he does appear in an AQI video from 2006-07. He took control of ISIS in 2010.

ISIS has been welcomed by much of the Sunni population. Zelin says people see them as “liberators,” since they feel they have been aggressively denied political and economic opportunities by the Shi’ite-dominated government of Nouri al-Maliki.

However, Zelin says this could be just a “honeymoon period.”

“It’s likely that once ISIS starts truly instituting a lot of their more over-the-top judicial procedures, that you could see a backlash.”