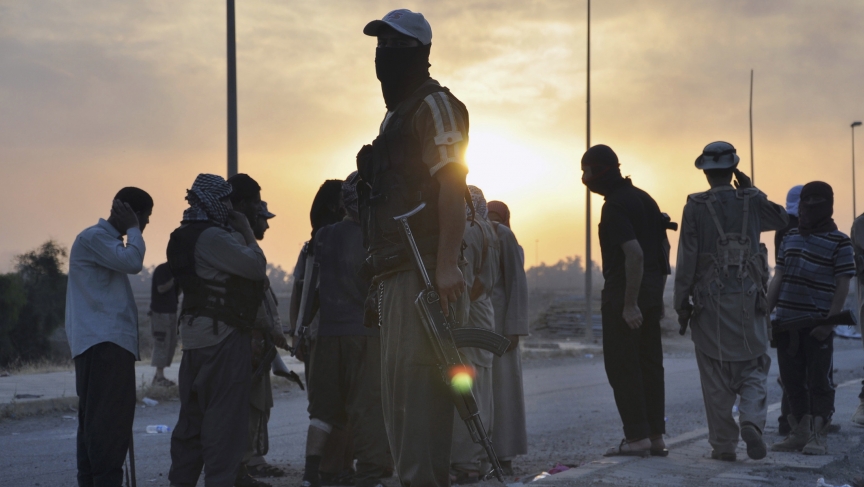 Fighters from the Islamic State of Iraq and Syria (ISIS) stand guard at a checkpoint in the northern Iraq city of Mosul on June 11, 2014. Since Tuesday, black clad ISIS fighters have seized Iraq's second biggest city Mosul and Tikrit, home town of former dictator Saddam Hussein.

The war in Iraq is not, in fact, over. Not at all. President Barack Obama acknowledged that today when he said, “What we've seen over the last couple of days indicates the degree to which Iraq is going to need more help.”

“My team is working around the clock to identify how we can provide the most effective assistance to them,” the president said at the White House on Thursday afternoon. “I don't rule out anything, because we do have a stake in making sure that these jihadists are not getting a permanent foothold in either Iraq or Syria.”

Obama suggested that some kind of US military action could come soon. But he went on to characterize the problem in Iraq as a political one. “This should be also a wake up call for the Iraqi government. There has to be a political component to this, so that Sunni and Shia who care about building a functioning state that can bring about security and prosperity to all people inside of Iraq come together and work diligently against these extremists.”

After listening to the news out of Iraq for the last few days, one former Iraqi diplomat told me that the situation could hardly be more serious.

“We don't have the luxury of time in Iraq anymore. We are facing truly an existential crisis: to be or not to be,” said Faisal Istrabadi of Indiana University's School of Global and International Studies. He was Iraq's ambassador to the United Nations from 2004 to 2007. The first bit of advice Istrabadi had for the Obama administration was about Iraq's prime minister, Nouri al-Maliki.

“If Maliki had been a successful leader, I would be the first to support him,” the former ambassador said. “But he has in fact been a disaster. Maliki — to paraphrase Ronald Reagan — is not a part of the solution. He is the problem, or at least part of the problem.”

Istrabadi said Maliki “does not have a vision that is comprehensive and inclusive, of an Iraq for all Iraqis.”

“We need new leadership in Iraq,” he said.

The US can claim much responsibility for the chaotic state of Iraq today, Istrabadi said. Disbanding the Iraqi army, for example, was a big mistake. Iraq's army was a professional force made of conscripts from across the national spectrum. But Iraq's current army is a highly sectarian and politicized institution. And Israbadi said the prime minster has contributed to that.

“There's a consensus among the political leadership in Iraq now,” he said. “Nouri al-Maliki is not a viable candidate for a third term [in office]. The United States needs to stop its diplomatic efforts to change people's minds.”

American influence in Iraq has its limits, especially since US troops pulled out in 2011 at the request of the  Maliki government. “In the middle of the civil war [in the mid-2000s], the US had more than 170,000 troops on the ground and that civil war raged,” said Brian Katulis of the Center for American Progress. “Our engagement led to a decline in violence. What it did not lead to is any real sense of political reconciliation inside of Iraq — and that is what these militant groups have exploited.”

Katulis says any US military action taken against the jihadist groups advancing toward Baghdad needs to be calibrated with political action taken by the Iraqi government. What the Obama administration should be looking for is reliable partners in Iraq.

“The definition of reliable is very much dependent on how unified the Iraqis are,” he said. “There's a sense in the Obama administration that [the US] definitely doesn't want to get back into the middle of a sectarian civil war. Been there, done that. That's not a very good option.”

At this point, the US administration should probably be planning for possible air strikes against militants with ISIS (Islamic State of Iraq and Syria) operating inside Iraq, said Brian Fishman, counterterrorism expert at the New America Foundation.

“[The US] should put the pieces in place, if the need arises,” Fishman said. But he went on to say that this is not a trivial undertaking. “It's not clear to me that we have the intelligence capability in Iraq on the ground at this point, or in the areas of Syria ... where ISIS is operating.”

If the American military does get back into the fight in Iraq, Fishman said there will be a very real risk of increasing the threat posed by ISIS to the US and its allies.

“If you are a European country that's seen tens or even hundreds of fighters go fight alongside ISIS [in Syria and Iraq], you are going to think very long and hard about whether you want to see your government supporting a US-led air campaign against that militant organization,” he said.

Fishman still thinks Washington is moving closer to using limited military force in Iraq, but it isn't really a continuation of the Iraq war that started in 2003. “At this point, this is about preventing a well-resourced jihadi state from emerging in the heart of the Middle East,” Fishman said.