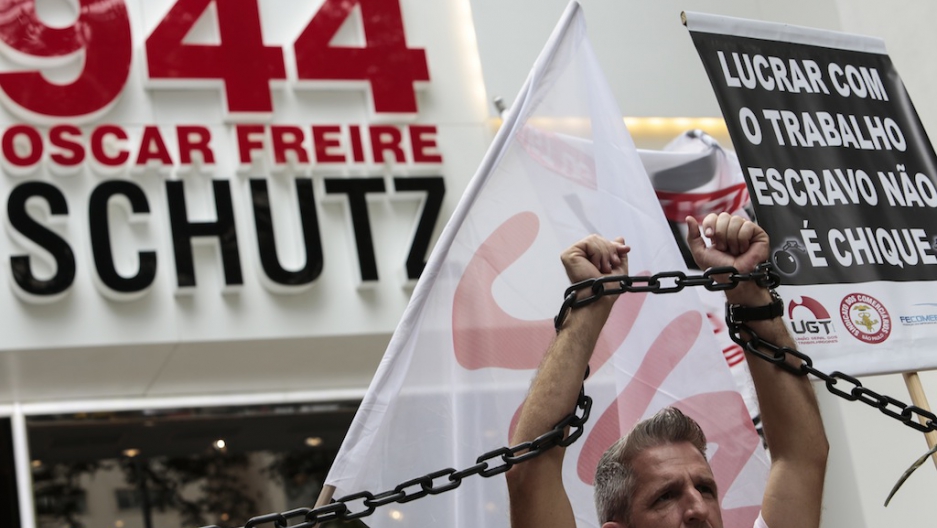 Demonstrators protest against slave labor in front of a Schutz store in Sao Paulo, Brazil, on March 12, 2014.
Credit: AFP
Share

SAO PAULO, Brazil — When it comes to emancipating slaves, Brazil is making up for lost time.

After a decade of debate in Congress, the Brazilian Senate on May 27 passed a constitutional amendment that calls for the expropriation, without compensation, of the land of those found guilty of exploitative labor practices. According to the legislation, the seized acres will be redistributed under a land reform program or used to build affordable housing.

The decision came during months of protests and strikes by the unions of teachers, police and bus drivers seeking better wages and working conditions. And this year's extremely contentious World Cup, according to labor judge Homero Batista Mateus da Silva, has "turned out to be a tremendous opportunity for wages and better conditions efforts."

Brazil was the last country in the hemisphere to abolish slavery, which it did in 1888, but it has since emerged as one of the most proactive nations when it comes to attacking the problem of modern-day slavery.

This new amendment follows other novel approaches to fighting slavery, a condition that includes debt bondage, being forced to work without pay or under threat of violence, as well as working exhausting hours in undignified conditions. The problem affects 21 to 30 million people around the world, and perhaps 200,000 people in Brazil, according to the Washington-based group Free the Slaves.

The Brazilian government has formed mobile units to raid farms, cattle ranches and garment factories suspected of using slave labor. Over the past decade, they have freed about 50,000 slaves from 2,000 work sites. The Labor Ministry publishes a so-called “dirty list” of companies caught using slaves which renders them unable to secure loans from public or private banks.

More than 400 firms that account for about 30 percent of Brazil’s $2.3 trillion annual GDP have joined a voluntary Slave Eradication Pact, in which they vow not to do business with companies or suppliers that use slave labor. In addition, governments in 13 of Brazil’s 26 states have formed commissions to address the slavery problem.

“We must acknowledge that Brazil has taken very important steps over the last 15 years on this issue which is why the country is considered a reference point [in dealing with modern slavery],” Xavier Plassat, a Brazil-based Dominican friar and coordinator of the National Campaign Against Slavery, told GlobalPost.

Even so, Plassat and others say that some of these measures are more symbolic than practical.

What’s more, Brazil’s slow, sometimes corrupt legal system foments impunity. Criminal convictions and actual prison time for slaveholders are rare outcomes. As a result, Brazil, for all its efforts, is still grappling with slave-like conditions in the workplace.

One of the most common practices is debt bondage. Workers are promised jobs in far-off regions, then upon arrival are told they owe their bosses large sums for transportation, food, clothes, tools and lodging and are forced to stay put to work off their debts.

Leonardo Sakamoto, president of Reporter Brasil, a Sao Paulo-based anti-slavery group, said the problem for many years has been centered in the Amazon rain forest as entrepreneurs trucked in workers for the backbreaking job of clearing forest to make way for cattle ranches and farms. These areas are far away from police stations and so remote that it can be nearly impossible for workers to escape. Living conditions are often deplorable.

“I lived in a wood tent, covered in black plastic sheet, with bare ground and no plumbing, no sinks or toilets,” one former slave, who earned about $164 a month at a jungle camp where razed trees were turned into charcoal, told Greenpeace.

More recently, authorities have been shining the light on urban slavery. In April, government inspectors discovered 111 workers trapped in slave-like conditions at a construction project to expand Guarulhos International Airport in Sao Paulo. Among the group were six Pankaruru Indians.

“I was shocked to see men crying. They said they had used family savings to come to Sao Paulo,” Patricia Therezinha de Toledo, a judge at the Regional Labor Tribunal for Sao Paulo, told the Folha de S.P. newspaper.

Hundreds more slaves have been freed from garment factories in Sao Paulo and other cities. Of the more than 2,000 workers freed from slave-like conditions in Brazil last year, slightly more than half were discovered in urban areas, according to Flavia Leda, former Brazil program director for Free the Slaves.

Part of the challenge in eliminating slave-like conditions is Brazil’s slow judicial system. That’s why Brazil has put so much focus on market-based measures. So-called “name-and-shame” policies, like the dirty list, can embarrass companies worried about their public image into taking action.

As an example, Sakamoto pointed out that when news broke in 2009 that government inspectors had found slave laborers in garment factories that supplied the Spanish clothing giant Zara, the company’s stock fell by almost 4 percent on the Madrid Stock Exchange.

The Constitutional amendment, at least in theory, could be one of the biggest deterrents because it calls for the drastic measure of expropriation of lands used to exploit laborers. The idea is to scare abusive employers into better behavior because in Brazil, “land is everything,” Plassat said.

However, the Brazilian Congress is now debating the law that would implement the amendment.

In the process, Plassat said some rural-based legislators are trying to water-down the legal definition of slave labor by removing clauses that define it as including exhausting work hours and undignified conditions. In addition, it’s unclear what court would be in charge of expropriation proceedings which would, in all likelihood, last for years.

As a result, Plassat said: “Right now, the amendment is more symbolic than practical.”