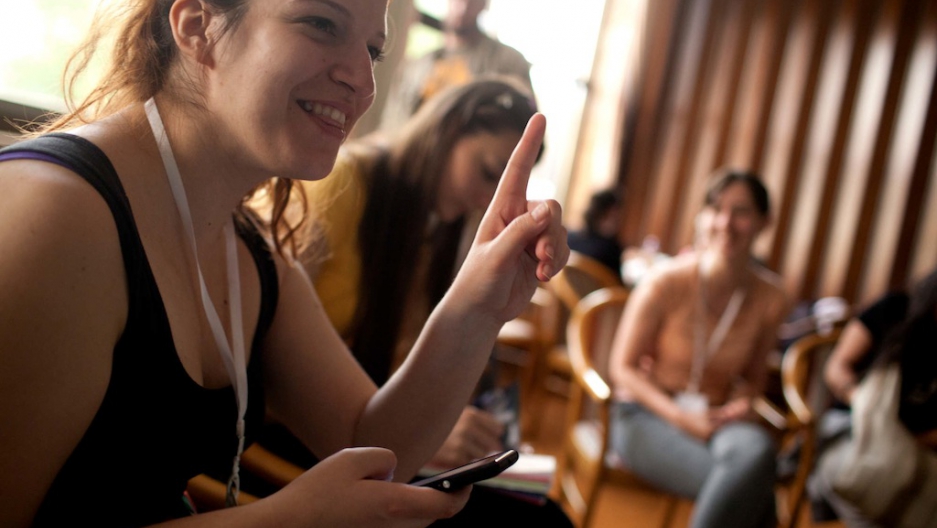 Participants in "Peace Event Sarajevo 2014,” an international gathering of peace activists brought together 1,000 delegates from around the world from June 6 to 9.
Credit: Ron Haviv/VII
Share

SARAJEVO, Bosnia and Herzegovina — The footsteps of the assassin are marked near the bridge here where a 19-year-old Serbian nationalist pulled the trigger on a small revolver that killed the heir to the throne of the Austro-Hungarian empire, Archduke Franz Ferdinand and his wife Sophie.

It was 100 years ago, on the morning of Sunday, June 28, 1914, that this event lit a fuse that ultimately exploded into the First World War, mobilizing 65 million troops to battle, leaving three empires in collapse and claiming the lives of 20 million soldiers and civilians.

There are cultural exhibitions, peace conferences and somber ceremonies this month here in Sarajevo, across Europe and worldwide to commemorate what the American historian Fritz Stern called “the first calamity of the 20th century, the calamity from which all other calamities sprang.”

This week an international gathering of peace activists brought together 1,000 delegates from around the world who attended workshops and roundtables dedicated to “speaking out together against war and violence” and “to appeal for a culture of peace and to stand up for peace,” as the program for the “Peace Event Sarajevo 2014” proclaims in its welcoming message.

Peace is not a word that is used much these days. It seems perhaps grandiose or out of fashion in a post-9/11 world of unpredictability and atomized violence. But ‘peace’ was very much the business of the gathering here. The three-day event, from June 6 to 9, brought together a crowd that was distinctly young and committed. They were largely in their 20s and mostly from the Balkans, representing a generation that was born of war and that never wants to see it happen again.

There were also a few dozen young Americans who had made their way to Sarajevo for the conference. Among them was Cornelius Frantz, 25, of Pittsburgh who said his membership in the Mennonite Church had led him to work for peace and to try to learn the lessons that World War I offers.

“There are so many similarities in these two times, the days of 1914 that led to World War I and now. There is huge unemployment for youth here now, which is over 60 percent, and the same was true then. There is a feeling of big empires influencing events and lots of economic divisions. That breeds stress and desperation,” he said.

“It’s like history is hitting me in the face at every turn here,” he added.

Between the workshops and round tables, photographer Ron Haviv and I caught up with a group of young women who had attended the conferences and who were bound together by a shared experience with a German-funded program called ‘Vacation from War’ that invites young people out of war zones to come together across ethnic divides and gain perspective and knowledge on how to live together.

Tijana Boric, 23, was one of the participants out for some fresh air and we ran into her on the Ottoman-era Latin Bridge just across from the small Sarajevo Museum that commemorates the assassination with concrete imprints that mark where Gavrilo Princip stood, the greasy black revolver used in the attack, newspaper front pages marking the event and sepia toned photographs that capture the day.

Today, there’s a three-story billboard on the building that features the proud, mustached portrait of Archduke Ferdinand and the thin, pale face of the assassin Princip which proclaims “The Street Corner that Started the 20th Century.”

Standing just off that street corner on a cobblestone footbridge, with families strolling and tourists listening to guides tell the story with the rolling waters of the Miljacka River below, I asked Boric about the 100th anniversary of the assassination, the wars it unleashed, the dark ethnic hatreds that began to ossify and what all that history meant in her own life.

Another girl attending the conference shyly came forward after being encouraged by her friends. She did not want to give her name or her hometown, but she wanted me to know that her great, great grandfather had a footnote in history as the Serb nationalist who, via a network of conspirators, had provided the gun that ended up in the hands of Princip on that day.

There was a time in the former Yugoslavia when the assassination was remembered as a heroic act against a controlling empire. Though the plaque that marks the spot states the facts in a neutral tone, it was once more seasoned with Serb nationalism.

She explained, “In their heads, my grandfather and the men of that time who were Serbs had good reason to want to fight against an empire. But their story is not my story. My story is to share good energy. Young people can do good things for older people. They have their walls around them, it is our fight to do good,” she said.

Many of the young people here would confide over coffee that they felt the conference was pretty disorganized, that many of the lectures were ridiculously long and that there was not enough dialogue with the audience. There was very little attempt, they observed, to engage a wider audience online.

And it was definitely easy to be cynical about all the language of “solidarity and peace.” The droning musical dedications to the late Pete Seeger and the tie-dyed T-shirts and beads for sale at the entry might make some eyes roll. But right there beyond the clichés was the setting of a resilient city that knows war, that is still scarred by war and that seemed the perfect stage set for practical and purposeful workshops and exchanges dedicated to peace.

One of the scenes that captured that spirit was when Belfast’s Mairead Maguire, who shared the 1976 Nobel Peace Prize for reaching out across the ethnic divisions of Northern Ireland at its bloodiest period to try to find peace, conducted a workshop that was packed with young people.

In the lilting voice of an Irish grandmother, she told the audience, “What we found in our experience was that when people don’t know each other, or don’t really understand each other, the fear takes hold. Once the fear is set alight, we’re all murderous. We can take a gun and kill each other. So we must understand that the depth of ethnicity is deep.”

She let the words hang in the air and young Serbs, Croats and Bosnians nodded their heads in affirmation and understanding as Maguire continued, “But we must have courage to reach across these divides. Don’t be afraid. If you are afraid, that’s okay. Go and reach across anyway.”

The young people in the audience were no longer nodding, but they were listening.