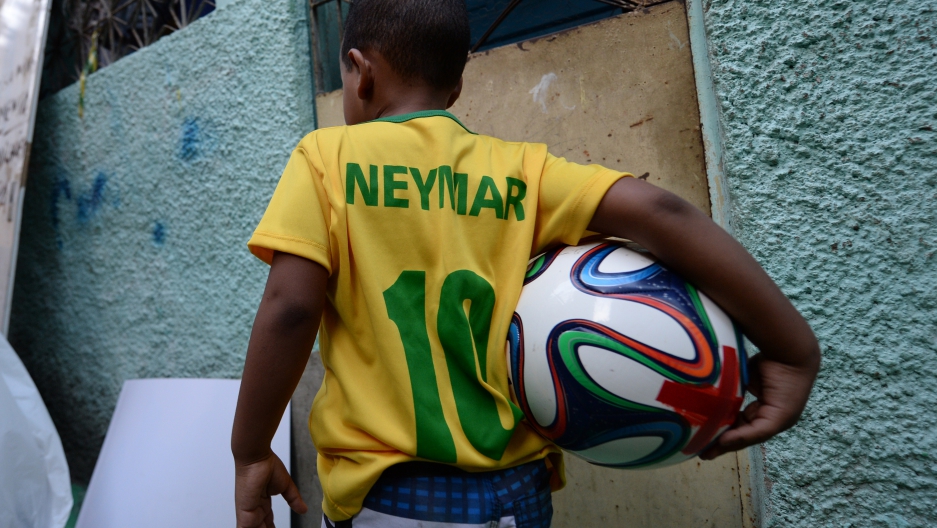 A boy of the Jacarezinho shantytown walks with a football after decorating the streets and houses of the neighborhood for the upcoming FIFA World Cup, in Rio de Janeiro.
Credit: VANDERLEI ALMEIDA
Share

The soccer World Cup is here. The world is watching, the fans are pumped and the Brazilian people are — well, not exactly at fever pitch with excitement. Angry protests are continuing over the gobs of money spent on stadiums despite Brazil’s sluggish economy, myriad social problems and devastating gap between rich and poor.

Yeah, we’ve been there. Four years ago it was South Africa’s turn to host — and we learned a few lessons along the way.

It’s too late to undo the “white elephant” stadiums. And there’s no changing the fact that FIFA is about to make a killing while your country will be left in debt.

But here are five tips for making the best of your World Cup experience.

1. Be nice to the visitors

Tourists pose for photos in front Christ the Redeemer statue prior to the 2014 FIFA World Cup. (Dean Mouhtaropoulos/Getty Images)

They’ll tell their friends — or at least in South Africa’s case they did. Tourism numbers have steadily increased in South Africa since the World Cup, reaching nearly 15 million visitors last year. South Africa’s tourism authority reports a particular increase in Brazilian tourists, who came in droves during 2010.

The World Cup went far toward changing negative perceptions about this country. It helped that crime virtually disappeared during that month in 2010 and South Africans were their typical hospitable selves. A British tabloid had warned of an impending “machete race war” during South Africa’s World Cup — and guess what, it didn’t happen.

2. Cheer for the underdogs

So Brazil, let’s imagine that — heaven forbid — your national team doesn’t make it to the finals. Unlikely, I know, especially since you guys now have the backing of Nate Silver.

But let’s just say that against all odds, the Brazilian team croaks. Instead of being poor losers, throw your support behind a team that needs a boost. In South Africa’s case, this was Ghana. After Bafana Bafana was eliminated, South Africans backed the Black Stars, trooping off to games dressed in Ghanaian colors — a heartwarming scene of good sportsmanship.

And since South Africa hasn’t managed to even qualify for this World Cup, let me add: go Ghana!

3. Make a plan for all those stadiums

Yes, you are about to be saddled with white elephant stadiums. Yes, FIFA’s demand for new stadiums in remote corners of the country is a total waste of money. But now is the time to get creative about what to do with these hulking behemoths when the World Cup is over.

For example in Cape Town, the $600 million stadium built on primo waterfront real estate can now be hired out for birthday parties and cocktail receptions. That's great because otherwise it barely gets used and some people argue the building should just be torn down.

A man rides a bicycle down a decorated street in Rio de Janeiro, two days ahead of the World Cup opening game. (GABRIEL BOUYS/AFP/Getty Images)

For a brief while, South Africa was on top of the world.

South Africans fondly remember their World Cup as a time of national unity and pride. During those halcyon days of 2010, every car flew the national flag, the streets were safe and people of all backgrounds mingled together and sang “Shosholoza” on packed trains to matches in Soweto.

Yes, there was a massive hangover to come. It all came at a high financial cost to a country where poor delivery of basic services, such as water and electricity, continues to cause daily protests. Roads to stadiums were improved while nearby townships still don’t have flush toilets. FIFA made money hand over fist from the 2010 World Cup, but South Africa racked up losses.

And so Brazil, “ke nako” — it is time. It’s too late to turn back the clock on the FIFA World Cup, so try to enjoy the ride.

5. Just be glad you don’t have vuvuzelas