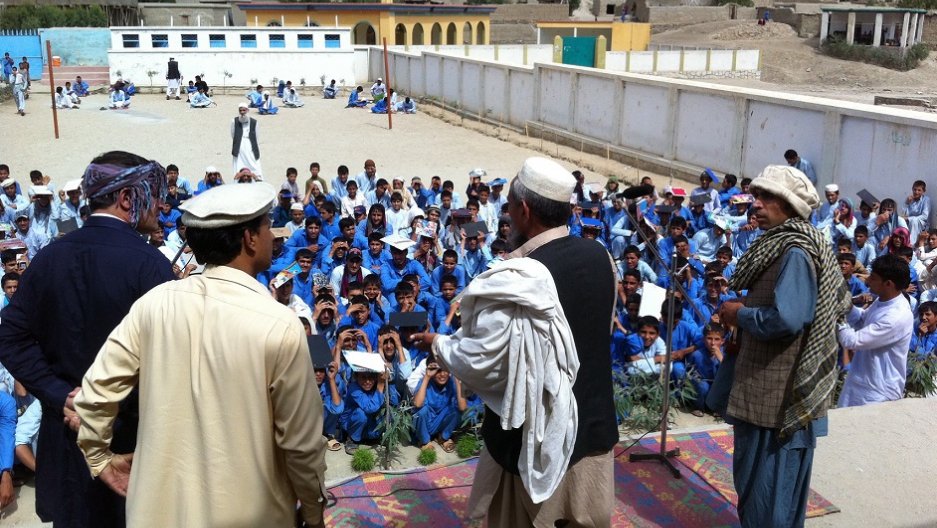 KABUL, Afghanistan — In a remote village in eastern Afghanistan, women and girls congregate at the communal well, gossiping about daily life in the village: who got engaged, who got married, who might soon be pregnant.

A woman approaches, one of the few educated females in the village, who now works for the Independent Election Commission (IEC). She tells the others about the runoff election coming up on June 14. She tells them that their vote can change Afghanistan’s future.

The women say their vote won’t count. They say the men in their families won’t allow them to go to the polls because male strangers will be there. The woman tells them their vote matters. She mentions separate polling stations for women.

This is a scene from a play, part of a series of get-out-the-vote performances traveling from village to village in rural Afghanistan. In the months leading up to the first round of presidential elections April 5, and again now in the run-up to the runoff vote, tens of thousands of Afghans have been meeting up in schools, police stations, homes, public parks, women’s prisons, shelters and other communal spaces in villages throughout the country to watch and participate in these mobile theater performances. They're aimed at encouraging Afghans to believe in the power of their vote — in the first democratic transfer of power in Afghanistan after 30 years of war — and to stand up to the Taliban.

“We realized that if women don't vote in the election, that would mean half of the population of the country [will be left out],” said Shafia, after watching a performance in Kandahar, southern Afghanistan.

The performances, part of the Voter Education and Fraud Mitigation project of the NYC-based Bond Street Theater and supported by the United States Institute of Peace (USIP), operate in areas that are isolated, conservative and volatile, and often controlled by the Taliban. The project started in September 2013, working in conjunction with provincial IEC offices to get their support to perform in areas that never saw live theater.

The six theater troupes, including three all-women's groups, have so far reached over 150,000 people.

“Theater is a really good way to get information out to the public,” said Joanna Sherman, founder and artistic director of Bond Street Theater, which has been working in post-conflict zones around the world since 1976. "Theater is just intrinsic to human nature — people tell stories and they act them out."

Theater is not new in Afghanistan, but was banned, along with most other forms of entertainment, when the Taliban took control of the country in 1996. After the fall of the Taliban five years later, Afghanistan held a groundbreaking theater festival in 2003 in which 50 groups performed. All but one of the performances was about the war.

“All of a sudden, these little groups sprung up around Afghanistan,” recalled Sherman, who was in Afghanistan in 2003 for the theater festival, the beginning of Bond Street Theater’s work in the country. Many of the best actors had fled to Pakistan and returned to Afghanistan after the US invasion in 2001.

These election performances are the first of Bond Street Theater’s performances in the country to be run completely by Afghans.

One of them is Sayed Karim Zhwandoon. He started performing when he was a 15-year-old refugee in one of the camps in Peshawar, Pakistan, close to the border. He now directs the Nangarhar Theater Group from Jalalabad, the capital of Nangarhar province in eastern Afghanistan.

He said that people in many areas of Nangarhar didn’t take the runoff election seriously. They believed there wasn’t any justice in the first election and that their second vote would not count. His goal is to show people why it's necessary for the election to go into a second round of polling, which happens if no candidate wins 50 percent of the vote.

“It’s very important to show them the value of their vote,” he said. “We want people not to give their vote based on tribe or language.”

His team performs throughout Nangarhar and neighboring provinces such as Kunar and Laghman, while the other teams are putting on shows in Dari and Pahsto languages in other regions of the country, including Kandahar in the south and Bamiyan and Kunduz in the north.

In order to be effective, the actors had to become experts in the presidential elections, learning about both election laws and Islamic laws — particularly, for example, ahead of performances in majority-Pashtun areas where some thought voting was prohibited by their religion.

Live theater has also given a new outlet for women to perform about important issues and be out in public, which is often taboo in Afghanistan. It has empowered the actors and actresses, too.

“This theater project has given me new courage to speak out,” said Ayesha, an actress from the Nangarhar Women’s Theater troupe in Jalalabad. “Afghanistan is going to improve, we need to send the message to the people.”

The group of performers consists of 27 actors and actresses in total, including the directors. The troupes will put on at least 25 performances before the June 15 runoff, reaching 10,000 viewers directly and another 50,000 through mobile phones. Zhwandoon relies on the audience to help spread their messages back to their families and neighbors in their villages by filming the performances on their phones.

Despite the security threats to operate in these remote areas, Zhwandoon and the other performers are determined to continue acting.

“We are not scared because we are doing our work for good thing for our community,” he said. “Theater and drama is our weapon” to fight terrorism and “work for the future of our country.”