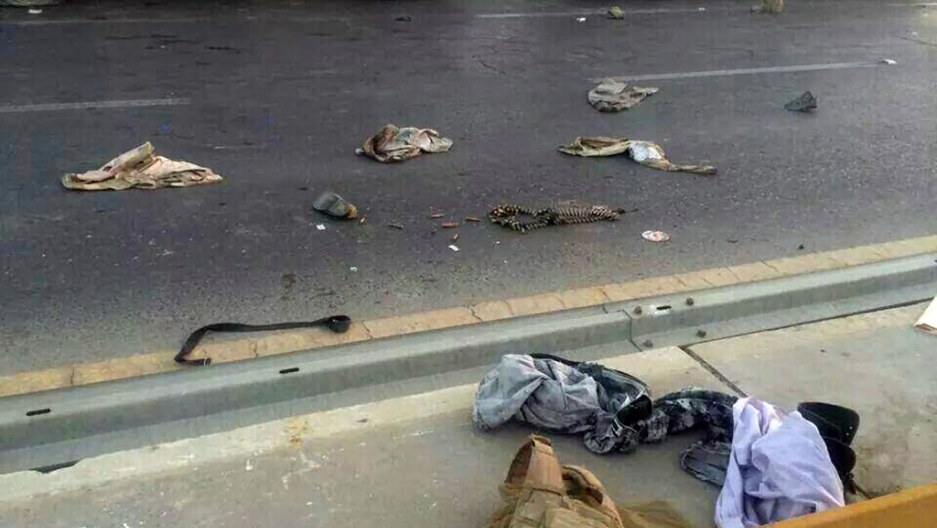 A picture taken with a mobile phone shows uniforms reportedly belonging to Iraqi security forces scattered on the road on June 10, 2014, after hundreds of militants from the Islamic State of Iraq and the Levant (ISIL) launched a major assault on the security forces in Mosul.
Credit: STR
Share

You know things are bad when the police run away.

Iraqi security forces are apparently so scared of the militants who have seized control of the cities of Mosul and Tikrit that they're stripping off their uniforms and fleeing naked for fear of being identified.

The above photo was taken by cellphone by the side of a road in Mosul on Tuesday.

Here's another image of security uniforms littering the streets.

Iraqi uniforms strewn on the road in Mosul. Troops discarded them & fled. The city is now under ISIS control. pic.twitter.com/3QvMiobHf8

Fighters with the Islamic State of Iraq and the Levant (ISIL) overran the western bank of Mosul overnight Monday after the US-trained Iraqi troops and security forces abandoned their posts.

More from GlobalPost: Where ISIL, the jihadist group that is seizing Iraq, came from and what it wants

Tikrit has now also fallen to the fighters and reports are circulating that the group is driving on to Baiji.

"The militants offered safe passage to some 250 men guarding the refinery on the outskirts of Baiji, about 200 kilometres south of Mosul, on condition they leave," Reuters reported.

A video posted anonymously to Facebook purportedly showed empty streets, the smoking hulks of military vehicles and at least one Iraqi police van that was overrun by insurgents in Mosul.

The stunningly easy defeats are an embarrassment to Iraqi Prime Minister Nuri al-Maliki and his security forces, and have heightened questions over al-Maliki's ability to hold onto control of the war-torn country.