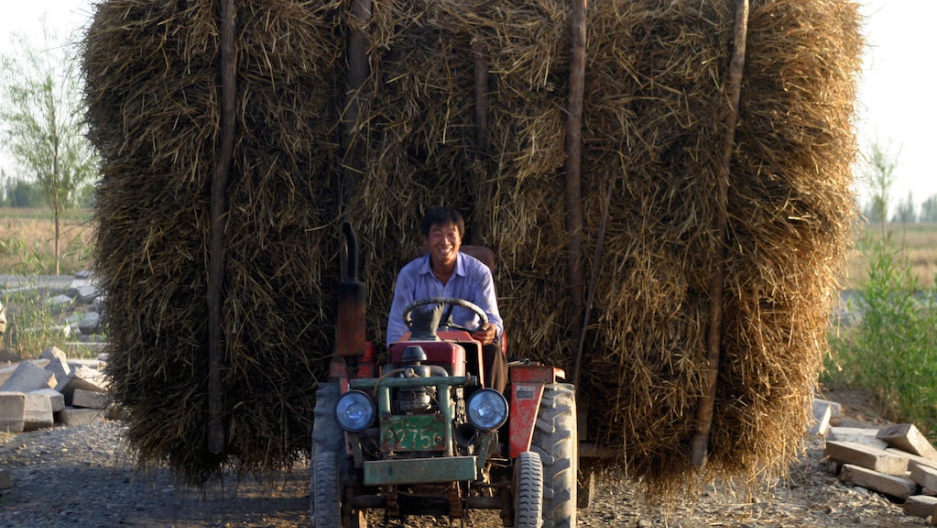 A man transports straw to the Gobi desert that will be stuck into the ground to prevent sand movement. (Photo by Katharina Hesse/Getty Images)
Credit:
Share

BAIJITAN NATURE RESERVE, China — We were surrounded by sand.

It stretched in undulating waves to the horizon in all directions.

Wei Men, who works for the Baijitan Nature Reserve in Ningxia province, beckoned for us to step down from our desert overlook and take a close-up look at the desert floor. He wanted to show us what officials hope is the future of this arid stretch of China.

Ningxia is facing a big problem. A small and relatively poor province, its population is growing and it has ambitions to expand its industry and agriculture to catch up with the rest of the country. That requires water. Left alone, the desert would swallow up farmland that China desperately needs to feed its 1.3 billion residents.

Up close, our group of Chinese and American scholars could see that the dunes were covered in a latticework of wheat straw, fixed into the ground in small squares. Wei Men pointed out the fragile seedlings at the center of each.

The scheme seemed to work. A strong wind blew into our faces, but the sand remained in place.

Then Wei Men told us about the three 10,000s. “Each worker at Baijitan is responsible for 100 mu,” Wei said, referring to the Chinese equivalent of 16 acres. In the course of a year, the worker is expected to create 10,000 of these home-base-sized squares, and to plant 10,000 drought-resistant bushes.

In return, they would earn 10,000 yuan a year, nearly $2,000. That’s low for most Chinese workers, but quite a step up for subsistence farmers.

Baijitan is located in China’s midwest, just south of Inner Mongolia’s deserts and about halfway between Beijing and the mountains of Tibet. The nature reserve has been carved out of a hardscrabble region of Ningxia province, where the dirt roads pass humble brick buildings with phone numbers painted on their walls, beaconing buyers of scrap iron.

Though Baijitan is sparsely populated, it is not exactly remote. Nearby is the provincial capital, Yinchuan, a city of two million people that has quadrupled in size over the last 20 years (though it still hasn’t broken into the top 75 Chinese cities by population). An ancient city on the Yellow River, Yinchuan has preserved a few relics of the past, but increasingly focuses on a future of modern industry and foreign investment.

The conflict in Ningxia between an expanding economy and an expanding desert is a dilemma facing all of China. The triple whammy of population increase, industrial agriculture, and urbanization has put pressure on the water supply and deforested large swathes of the countryside. Overgrazing and climate change have also contributed to the spreading sands.

In the 1990s China’s deserts were expanding by 3,500 square kilometers every year, according to Luo Bin, deputy director of the National Bureau to Combat Desertification.

It’s not only a problem for China. The “yellow dust” from the Gobi Desert swirls up into the atmosphere to create environmental hazards as far away as Korea and Japan.

In the battle against the sands, the most common image is of a phalanx of trees standing up against the dunes. Reforestation certainly plays a role in China’s strategy of arresting the progress of the desert, and we passed by a wide variety of trees in Baijitan on our way to the overlook.

But “a plantation needs water,” explains Wu Yinliang, the head of the climate change division of Ningxia’s Development Reform Commission. “We can’t afford to use water. Wheat straw, on the other hand, is a dead thing. It doesn’t need water.”

The straw becomes home to various microorganisms as it breaks down into fertilizer that nourishes the plant at the grid’s center. At Baijitan, according to Wei Man, they’ve pushed the desert back 30 kilometers with this 50-year-old technique. It’s part of a countrywide effort that has succeeded in slowly reversing the march of sand.

The head of the facility, “desertification hero” Wang Youde, has been at Baijitan for more than two decades. He has made the struggle against desertification a community effort, and proudly carries huge bushels of wheat straw on his back alongside the other workers. “If people step forward,” he likes to say, “the desert will step backwards.”

The deserts of China have swallowed numerous cities over the millennia. The Silk Road once passed through Ningxia. Many stops along the way have disappeared beneath the sands. Imperial tombs discovered in 1972 in the western suburbs of Yinchuan are all that’s left of the Xia dynasty that ruled over the region in the 11th century. Even the Great Wall has been rubbed away to near insignificance in this part of the country.

Castles made of sand

It’s difficult to imagine a metropolis as bustling as Yinchuan suffering the same fate. The old city, with its well-preserved South Gate, Jade Emperor Pavilion, and 1,500-year-old Heibao Pagoda, lies principally along the north-south axis. The new city is rapidly pushing out to the east and west, with large modern hotels and extravagant buildings like a new theater shaped like an immense lotus flower.

To power this expansion, Ningxia is counting on sustainable technologies like wind power and solar energy. By 2020, according to Wu Yinliang, the county will rely on wind for 13.5 percent of power generation and solar for 6.9 percent. These are not empty projections. The province is home to 120 of the United Nations’ “Clean Development Mechanisms,” which offer industrialized countries a way of offsetting their carbon emissions by investing in wind farms and hydroelectric facilities in the developing world. There are only 250 such anti-climate change projects for the entire continent of Africa.

The Taiyangshan solar panel field in Ningxia, in 2011.

Despite its environmental challenges, Ningxia still depends on more traditional means of catching up with prosperous provinces. It is ramping up its coal mining and petrochemical industries, which both require huge amounts of water.

The province is also leveraging its cultural heritage. Ningxia is home to the largest Muslim population in China. The Hui people — who descend from the Arab traders and Persian soldiers who once plied the Silk Road and intermarried with the Han —  constitute more than one-third of Ningxia’s population.

Last year, the Chinese government organized huge first-time expositions in Ningxia with both the Arab states and with Turkey. An ambitious “Muslim World City” that will include an Arabian Nights theme park is being built a few miles south of Yinchuan on the way to the famous Najiahu mosque and the nearby “culture park” devoted to Hui traditions. The Yuehai Bay Central Business District, a kind of inland Hong Kong for Arab investment, is expected to attract more than 2,200 enterprises by 2020.

Ningxia managed to rebuild most of the mosques destroyed during the Cultural Revolution. Over the long run, however, the encroaching deserts might prove a much greater danger. All the wheat straw in the world can’t stop the rising temperatures associated with global warming, or replace the water lost to industry and agriculture.

Back at Baijitan, Wang Youde likes to quote a Chinese proverb. “It is hard to bring up a child,” he says, “but it is even harder to plant a tree in a desert.” After standing on the corner of one of the broad modern boulevards in Yinchuan and feeling the sting of sand particles against my face when the wind kicked up, I’m tempted to expand on the saying: It is harder still to sustain a city in the desert.

More from GlobalPost: The World Cup: Brought to you by one of China's greenest corporations