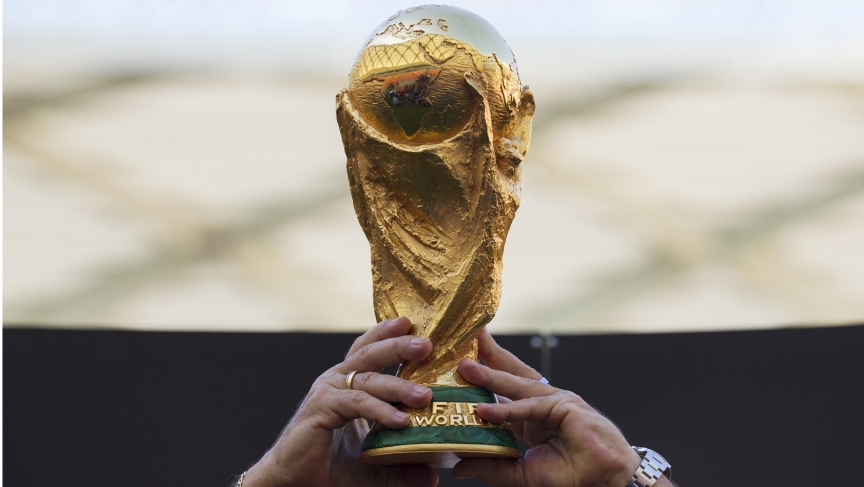 Rivelino, Brazil's former national soccer player and a member of the 1970 world champion team, holds the World Cup trophy during a presentation in the Amazonia Arena soccer stadium in Manaus, May 19, 2014.

The current World Cup trophy is comparatively young: debuting in 1974 after the original trophy was given to Brazil for keeps under rules in place in 1970.

Since 1974, players from each winning team have hoisted the cup above their heads, in celebration of their victories. But they're only allowed to keep the cup until the next team takes it from them, in four years. Instead, they're given a replica of the trophy.

But the backstory of the real trophy is fascinating, as reporter Jack Williams reported in a recent story for Narratively.

“With its new trophy, FIFA decided not to go in-house with the design process, soliciting 53 submissions from seven countries. One came from a quiet, private sculptor from Milan named Silvio Gazzaniga, a 50-year-old who had spent his life creating symbols of other people’s success.”

Williams says Gazzaniga got his start in the award business by making skiing medals. He eventually worked as the creative director for the Italian design firm Bertoni. And that's where he was when he submitted a trophy design for the World Cup.

“Compared to the bland silver cups given as prizes for most European football competitions, Gazzaniga’s design was flamboyant, an irresistible representation of exaltation and joy. What’s more, it would undoubtedly look mighty and appealing on TV — the champion’s hands wrapped around the contesting opponents; the sun’s light shimmering off the curvature of the globe.”

Williams says this design distinguishes the World Cup from others. But its size also stands out. Or, rather, doesn't stand out. The World Cup stands just 14.5 inches high. That's about half the height of the trophy given to the winner of the Champion's League. Its diminutive size gives it a special quality that sets it apart from the rest. It's a beautiful trophy for a beautiful game.

As for Gazzaniga, Williams says he's modest about his creation. He made the design. FIFA chose it. The news made him happy. And that's about it. “But when he saw Italy win in both 1982 and 2006 that's when it really hit home for him," Williams says.

“I guess the feeling of seeing your nation lift your trophy really kind of put those sad feelings to bed for him,” Williams adds.