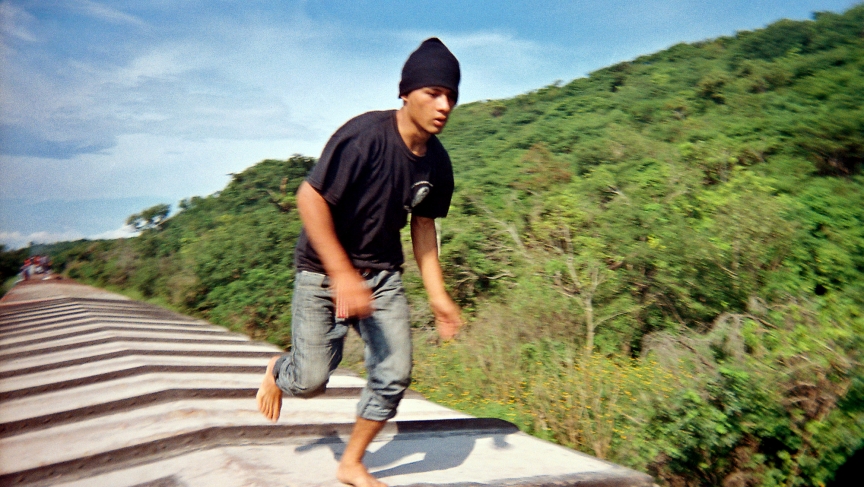 “It’s just crazy to see this guy barefoot,” says Pindado. “The tops of the trains are so hot. At the same time, he’s wearing a hat. The temperatures drop at night, especially up north. You can also see that the train is moving and that he’s jumping. There’s so much risk during the journey.”

After years of documenting migration in Mexico, Spanish-born photographer Encarni Pindado began a new project that handed the equipment — disposable Kodak cameras — to the migrants themselves and people who interact with them along the way.

“We’ve seen photos of the journey migrants take through Mexico, and I’d been on the trains with them as they made their way to the border,” Pindado said. “But I also knew that something was missing, that there were moments that we were still not capturing.”

MigraZoom launched in early 2013, supported by a grant from the United Nations Development Program.

Pindado, collaborating with other Mexico-based photographers, headed to Mexico’s southern border with Guatemala. There, Central American youth tend to congregate and regroup to continue their journey north.

The MigraZoom team handed out about 200 Kodak cameras and gave a quick photo workshop. They also told the migrants they would move up the usual migrant path, too, following the railroad lines, and gather the cameras along the way.

In the end, MigraZoom collected about 70 percent of the cameras they gave out. In return, they made prints for the participants to keep.

Here is a selection of photos taken by migrants, with observations from Pindado. The names of the photographers are omitted to protect their identity, as many have likely crossed the US-Mexico border without documentation.