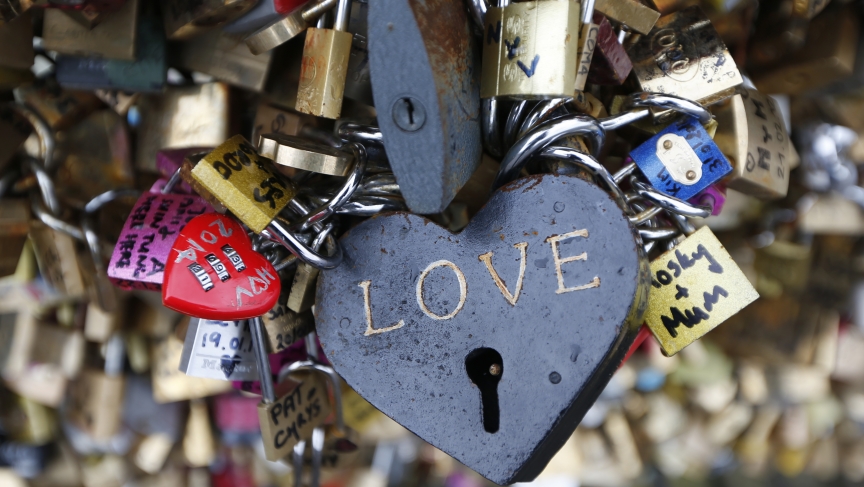 Thousands of padlocks clipped by lovers are seen on the fence of the Pont des Arts over the River Seine.

Millions of people make the trip to Paris every year.

Many of them take the time to put a lock onto the Pont des Arts as symbols of their love. Couples latch padlocks to the bridge and throw their keys into the river — the locks a real-world symbol of their unbreakable love.

But love comes at a price. And in the case of the bridge in Paris, the price is the bridge itself.

A chunk of fencing fell off the pedestrian bridge on Sunday under the weight of the "love locks," as they're called.

The collapsed fencing was replaced on Tuesday, and couples visiting Paris were back on the bridge latching their padlocks to the fence.

"We've been married for 34 years and if we were going to lock our love in, this is the place to do it,” said a couple visiting from the US. “Because we've loved each other for such a long time, we might as well continue the tradition.”

No one was hurt when the six-foot stretch of fencing came down on the Pont des Arts.

But officials say the fence collapsing into the water poses a real risk: the Seine is heavily traveled by tour boats and barges.

“I don't want to stigmatize the lovers of the capital, and the lovers of this fashion,” said Jean-Pierre Lecoq, the mayor of Paris' 6th Arrondissement. “But if we don't do anything about it, problems will keep happening.”

Some Parisians decry the locks as an eyesore. They're periodically removed by the city, but spring up faster than they can be taken down.