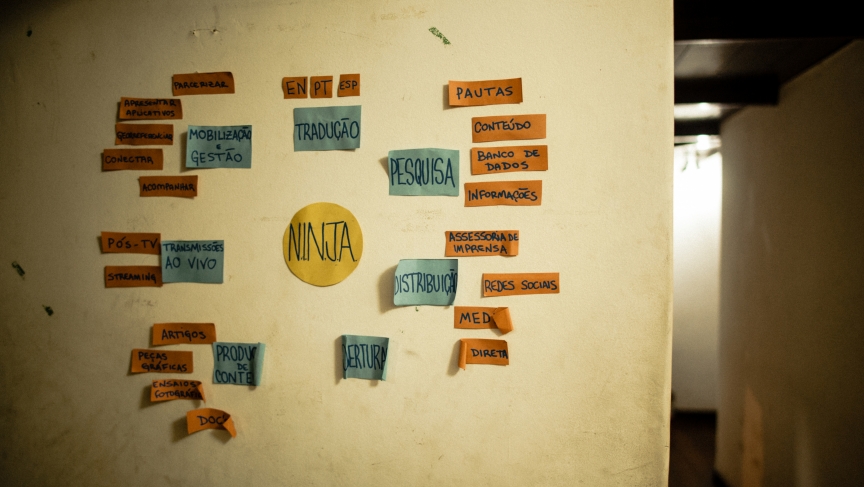 Midia Ninja headquarters looks like a college apartment. A bunch of guys lounging around with laptops, dirty dishes in the sink. Post it notes about shared responsibilities adorn a wall.

Except these notes aren’t about taking out the trash. They’re about covering the biggest protest movement Brazil has seen in two decades. Felipe Marques, one of the volunteer collective’s leaders, stands by a chart of Brazil’s new soccer stadiums and explains the schedule for World Cup games from Rio to Manaus.

"We’ll get word out to everyone via Twitter about alternative events, protests happening in front of the stadiums themselves," he says. "Ever since the eruption of protests in 2013, we’re trying to build a new reality that addresses the underlying problems."

The list of problems includes poor healthcare and education. So why then, protestors ask, did we spend about $15 billion on soccer stadiums? The protests all began last summer ... over a 10-cent hike in bus fares in Sao Paulo.

Hundreds of thousands of mainly poor people piled into the streets. Police responded with beatings, pepper spray and bullets.

Midia Ninjas captured a lot of the protest, live streaming images of police chasing down a female protestor and beating and kicking her. Such footage infuriated Brazil’s middle class, who joined the protestors in cities across the country.

Marques proudly shows the smashed screen on his smartphone, the result, he says, of a police stun grenade. Until Midia Ninja, he says, you didn’t see a lot of images like this on the news.

"In Brazil, we have a media model that is very monopolized. The news outlets are in the hands of a small number of families ... and now there’s a huge gap between the reality that these media outlets describe and what people actually live," he says. "People feel invisible to the mainstream media, or criminalized.

Midia Ninja, Marques says, is giving them a voice. The Ninjas now have hundreds of thousands of followers on social media. They helped scoop the mainstream press at one protest, nabbing footage of what appears to be an undercover police officer inciting violent clashes with authorities. Authorities are now investigating. But is this really journalism?

Long time reporter Fernando Molica isn’t sure. He works at the daily newspaper O Dia, in Rio. He says, the democratization of the media is a good thing. The more voices the better. But "what’s much complicated, is that these groups are violent against traditional journalists."

Molica says groups like Midia Ninja are so against traditional outlets, that they “out” mainstream reporters at events. Crowds then surround them, chanting for them to leave. Molica says you can’t just demand a voice on the media scene and then try to silence everyone else.

Midia Ninjas’s tactics are under fire from another direction, too: Brazil’s military police, whose members have often been caught by Ninjas using excessive force.

On a recent day military police commander Eduardo Carlos patrolled a favela near downtown, flanked by heavily armed men. The favelas are Brazil’s urban hilltop shantytowns. Police have been trying to “pacify” these crime-ridden neighborhoods since Brazil was named as the World Cup host in 2007.

So when you patrol in a place like this you have to have eyes in the back of your head.

An alley this way, alley that way, behind you, roof tops

"Yes, and the windows," Carlos adds.

Carlos says at night it’s especially difficult to distinguish between the enemy and innocents, including new rogue reporters like the Midia Ninjas, who don’t wear press badges or vests.

"The truth is that, yes, it can complicate things when a lot of people are running around. Although, generally, during demonstrations or in fights with drug traffickers, the press tends to stay behind the police," he says.

That’s not the Ninjas’ style. They say the larger truth is that the powers that be just don’t want new media around, embarrassing and exposing them.

So their work goes on. Giving voice to — and gathering new supporters at — a rally on Ipanema Beach to legalize marijuana.

And now, on the eve of the World Cup, public transportation workers are striking, military police themselves are threatening to strike during the games, as are Brazilians still angry about the cost of the event.

The Midia Ninjas are charging up their cellphones.