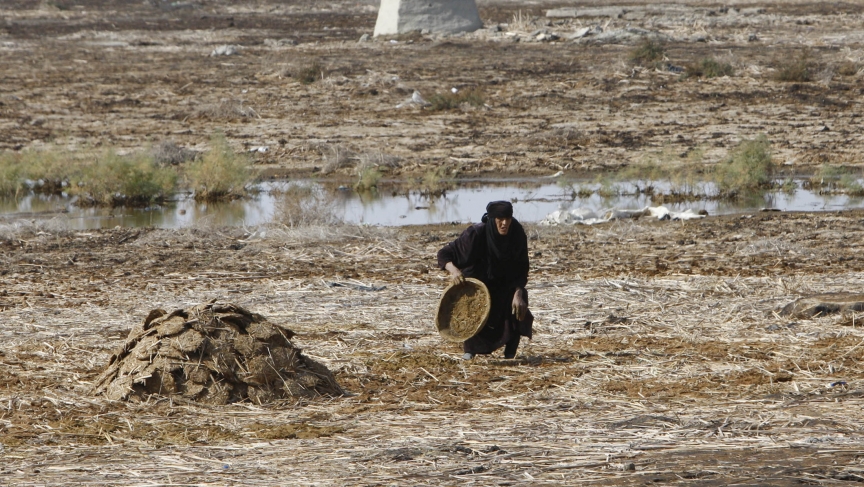 An Arab woman trudges through the marshlands at Al-Hammar marsh in Nassiriya, 185 miles southeast of Baghdad on January 23, 2009.

Carina Roselli was a US Army helicopter pilot in 2009. As she flew over the land in Iraq on her various missions, one thing caught her attention.

"The flat, desert landscape was striking," she recalls. "Rivers were actually channelised canals. A lot of it was straight lines."

There were few signs of  bio-diversity or green life of any kind where she flew — surprising because the area was once considered the largest marshland in the Middle East.

Roselli says seeing the land through night vision goggles made the view more stark — and even disoriented her while flying. Four years later, while Roselli was pursuing a degree from Vermont Law School, she became interested in finding a way to help revive those marshlands she flew over.

So last summer, she returned to Iraq, working with a group called Nature Iraq. It's an Iraqi non-governmental organization working to restore and preserve Iraq's nature and environment. She spent 11 weeks helping Iraqis establish new water management programs and water-sharing projects along the Tigris River.

She says Nature Iraq was started by an Iraqi-American who hopes to bring attention to the war-hit environment in his country. Roselli says since getting involved with environmental projects in Iraq, she got to know the country and its people a lot better.

Roselli says there's still a lot of work to do to get Iraq's marshlands to the state they were in the 1970s. And it will take help from other countries.

"The bigger issue for whether it's going to be possible is whether the water will be available from upstream. That's an issue that's trans-boundary, and it includes Turkey, Iran and Syria. There are many competing interests and many factors that are in play," she says.

But she mentions one positive step the Iraqi government took recently, which was to announce part of the marshes in central Iraq as the country's first national park. And it's steps like these that makes her hopeful.