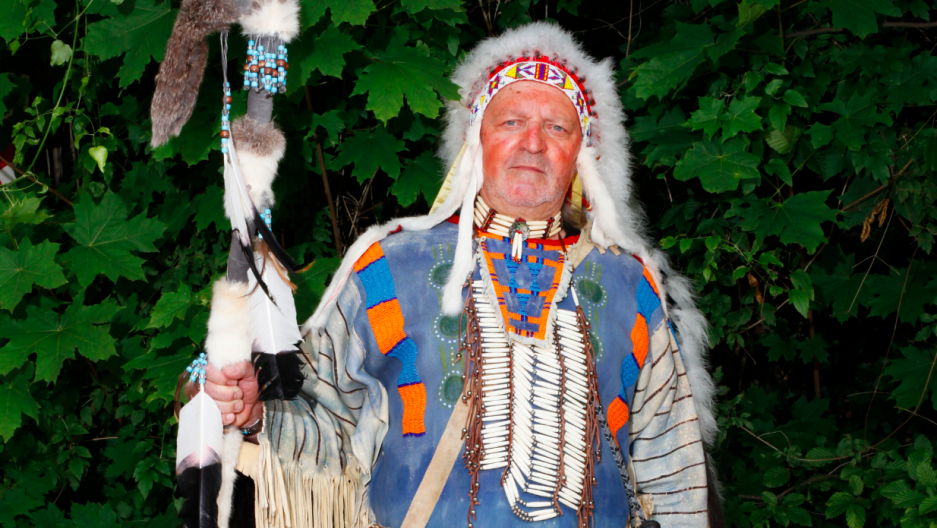 RADEBEUL, Germany — Dressed in buckskins and a flowing, eagle-feather headdress, a ruddy man holds up a fake war club as he gazes proudly at the rolling green hills in front of him.

This isn’t America or even a film set, but the site in Saxony of an annual festival celebrating the Western novels of Karl May, this country’s most beloved author.

Inspired by his pulp novels and the movies they spawned, many Germans are fascinated by the Wild West and a romanticized stereotype of “the Indians.” But with tens of thousands of German hobbyists donning feathers and camping in teepees on the weekends, real Native Americans have begun to wonder whether some Germans love them just a little too much.

“It gives him power,” says Norman Jimerson — an actual member of the Onadaga Nation also in town for the festival — observing the man with the war club.

Stocky and charismatic, Jimerson wears a bead-and-mirror medallion over a western shirt. “You can tell how he feels by looking at him,” he adds.

Like Civil War re-enactors, some are so obsessed with authenticity that they know more about the cultures they admire than the Natives themselves. They perform Native songs, dances and even religious rituals with scrupulous accuracy — refusing to see that their imitation may not always be welcome.

Red Haircrow, an Apache poet and entrepreneur who lives in Berlin, says many hobbyists have gone far beyond a love for Winnetou, the Apache chief of May's novel and a classic example of the ethnocentric idea of the “noble savage.”

“It's as if they believe their knowledge gives them some kind of authority over you or your culture,” he says.

Born in Radebeul, May produced much of his work here. A prolific author, he wrote dozens of stories and novels between 1874 and 1912, selling as many as 200 million copies of his various works.

Like the Africa of Edgar Rice Burroughs, the American creator of Tarzan, May's Wild West bears little relation to reality.

But it speaks volumes about the preoccupations of his late 19th-century readers, who fantasized about a return to nature amid the alienation of industrialization.

The sense of fantasy endures—and not only about nature.

At weekend camps held in remote locations and closed to the public, sexual liaisons are common, and there's an attitude of “what happens at the Indian camp stays in the Indian camp,” says a longtime observer.

In Radebeul, however, most of the visitors aren’t hobbyists, but parents with small children.

Near the town's modern train station, families troop across the tracks to board an old-style train pulled by a steam locomotive that travels a mile to the festival grounds. Boys with cap guns snap shots out of windows. Some children wear headbands and feathers and a few of the adults wear cowboy hats and spurs.

At the fair, the organizers have purposefully separated a cultural performance by visiting members of the Oneida Nation from the ersatz town of “Little Tombstone” and booths where kids don war paint and try their hands at archery.

Even though Oneida performers like Dale Rood of the Turtle Clan say any “insult” is tempered by good intentions and that the interaction enables them to teach Germans about how they live in today's world, it's still a little uncomfortable when real-life Native Americans come face to face with white guys in war paint.

More from GlobalPost: Vladimir Putin: love him or hate him, now you can eat him

Canadian Leela Gilday, a singer of the Dene Nation who says she took the gig on short notice not knowing quite what she was getting into, says she was stunned the first time she saw one of the hobbyists, and still isn’t sure how to feel about it.

“It's a strange situation,” she says. “But I don't feel the same way I do when I see people dressed up [as Natives] for Halloween. Here I feel like it's more of a tribute.”