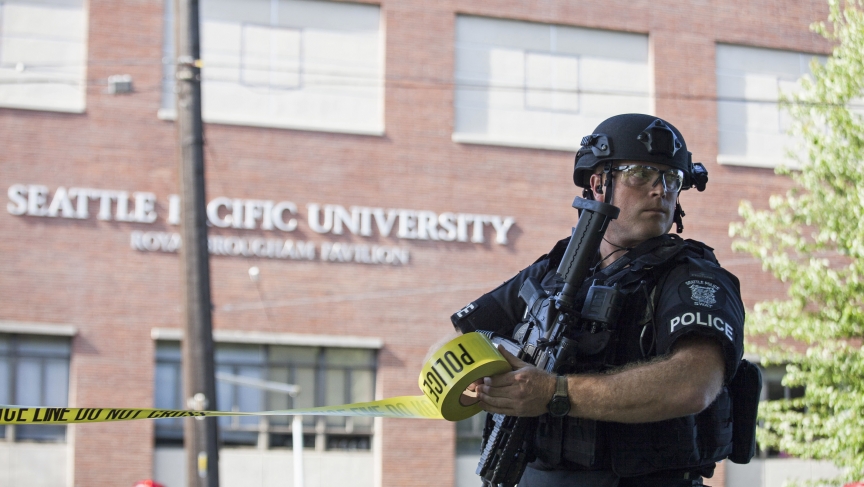 A policeman secured the scene after a shooting at Seattle Pacific University on June 5, 2014 that left one student dead. There has been a string of mass shootings in the US in recent weeks, as well as one in New Brunswick, Canada.

Late last week, Canada took its turn in the spotlight of mass shootings.

On June 4, a gunman in Moncton, New Brunswick, killed three Royal Canadian Mounted Police officers and injured two others. Police launched a massive manhunt, eventually capturing their suspect. But after the shooting, the Canadian news outlet Sun News made a decision that might seem surprising. They chose not to broadcast details about the Moncton shooter — not his name, not his photo, no personal details.

"There is a mass rush to get all that information out, but the ultimate question is, are we contributing to another mass shooting by making this person infamous?" said Marissa Simkew, a Sun News contributor who delivered a monologue on the network's decision the day after the shooting.

Sun News is not typically known for taking a reserved stance in its broadcasting. It's been dubbed "Fox News North" for its conservative commentators and its frequent critiques of the more liberal Canadian Broadcasting Corporation (CBC).

It's also same network that aired Ford Nation, a talk show that featured Toronto's crack-smoking mayor, Rob Ford — although the show was axed after only one episode.

In the case of the mass shooting, Simkew said, the network felt it had a moral obligation to refrain from using airtime to explore the personal details of the shooter. While they did broadcast the accused shooter's name and photo immediately after the attack happened during the manhunt, they stopped after the suspect was captured by law enforcement. She said they wanted to instead focus their coverage on the victims and their families, not the killer.

"Being in the media," Simkew said, "it's a dilemma. We have an obligation to tell the public what's going on, that's our job, it's to inform. And of course, networks care about ratings."

There is research from a variety of fields on how media coverage can potentially lead to an increase in violent acts. A study of mass murders in Australia, New Zealand and Britain concluded that shootings happen in clusters, not as individual instances. The Center for Disease Control and Prevention has published guidelines on how the media should report on suicides. And sociologist Zeynep Tufekci wrote in The Atlantic that the "tornado of media coverage" may be creating a "vicious cycle of copycat effects similar to those found in teen and other suicides."

Many shooters seem to have a common interest in previous deadly gun attacks. The Sandy Hook shooter had a reported fascination with mass murders, particularly the Columbine school shooting. The two Columbine shooters said they wanted a movie to be made about them one day. And the Santa Barbara shooter posted numerous videos on YouTube, giving his violent and misogynistic missives the potential for a worldwide audience.

While no networks in the US have instituted policies like Sun News's, individual TV journalists have decided not to identify mass killers by name. These include CNN's Anderson Cooper, in his coverage of the Aurora, Colorado, movie theater shooting in 2012, and Fox News' Megyn Kelly, after the 2014 Fort Hood shooting.

"For us in the press," Simkew said, "we have to take an honest look in the mirror to determine if, in fact, we are contributing to this very disturbing phenomenon."