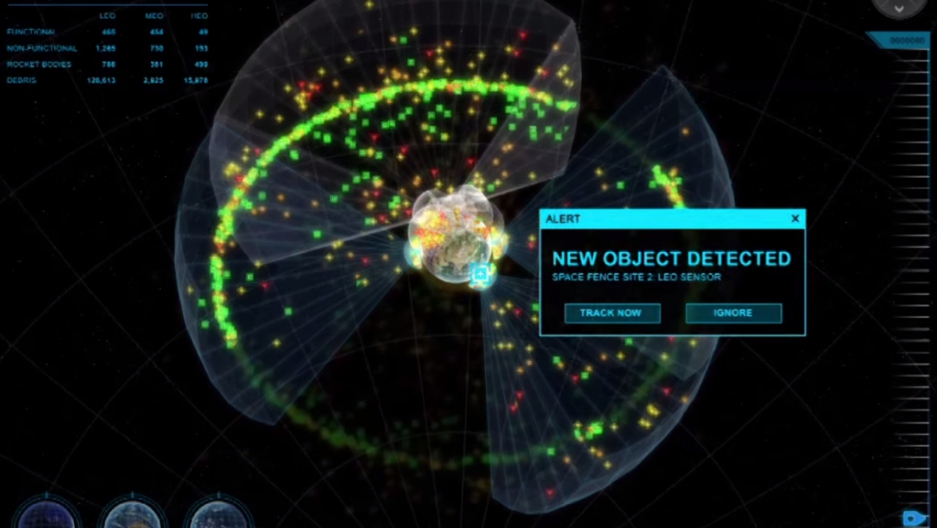 The reason we need such a system? Junk. Lots of junk.

We humans have been littering in space since 1957, the year the Soviet Union launched its Sputnik satellite. Since then, we've sent thousands of satellites and rockets up there. And it's getting to be something of a mess. There are now 500,000 pieces of debris flying around the Earth at 17,000 miles per hour.

Just how fast is 17,000 miles per hour? It's fast enough that a piece of debris that's half an inch in diameter would carry the force of a bowling bowl traveling at 300 miles per hour. When these things crash into each other they break apart and create a larger field of debris, which is something experts call a "collision cascade." And when a tiny speck of a thing carries the weight of a speeding bowling ball, it's a bad scene.

Until now there's been no good way to track of this stuff, which makes it a threat to both manned and unmanned space missions. In 2009, for example, an operational satellite collided with a defunct satellite. Not ideal. And just imagine you're an astronaut doing a space walk and nobody has any idea where these 500,000 pieces of space trash are. Basically you're looking at a situation like the one shown here in the film "Gravity."

The Space Fence will monitor and catalogue the debris using a ground-based radar system based in the Marshall Islands. (It's not a physical fence, obviously.) Lockheed's invention will replace the current Air Force Surveillance System, which was initiated in the 1960s and now tracks only 20,000 of those estimated 500,000 pieces of junk.

If you find yourself in space before the Space Fence goes operational in 2018, be on the lookout for things other than satellites and spent rockets. The first American spacewalker, Ed White, lost a globe in 1965. And the crew of Discovery lost a spatula on a trip to the International Space Station in 2006.

And watch out for pee. Astronaut urine has been blasted into space for the better part of 50 years now. So be careful.