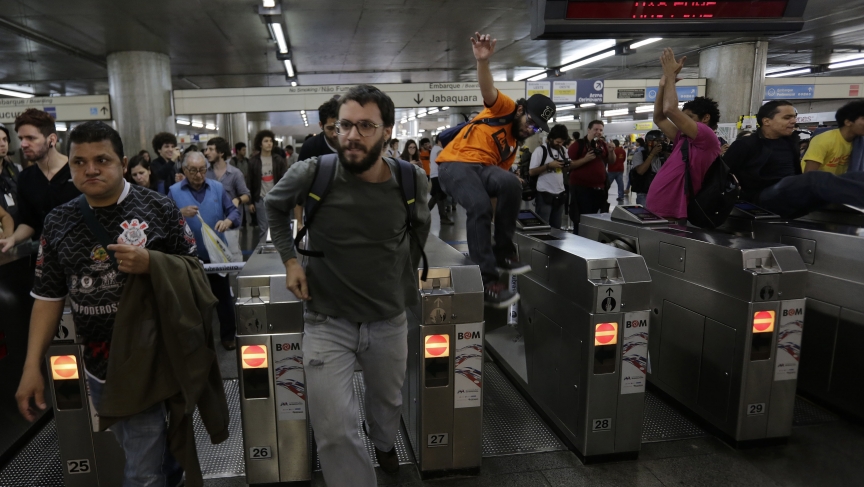 Demonstrators jump over the turnstiles without paying subway fares in support of a strike by metro workers in São Paulo. Brazilian police used tear gas on Monday to disperse metro workers on striking in defiance of a court order to return to work, just three days before the city hosts the opening match of the World Cup soccer tournament.

While Brazilians furiously finish their new stadiums, the biggest remaining question is whether they will even be able to get to the stadium for the opening match in São Paolo this coming Thursday.

Monday marks the fifth day of a transportation strike in the city. Metro workers have gone on strike and the subway system has ground to a halt.

“São Paolo is a city that lives in gridlock,” said the BBC’s South American soccer correspondent, Tim Vickery. “It has a subway system that will get you to the new stadium. You take that out and you’re getting a record traffic jam. ... It illustrates one of the issues of investment in this World Cup."

Anti-World Cup sentiment in Brazil has been bubbling for some time. Protests erupted a year ago during another soccer tournament, the Confederations Cup. The catalyst for those protests a year ago, according to Vickery, were demonstrations about the poor quality of public transportation.

“This was an issue that the people had been led to believe the World Cup would do a lot to improve and it really hasn’t delivered,” Vickery said.

William Troop, The World’s soccer expert, will be heading to the World Cup in Brazil not as a journalist but as a spectator. He’s concerned about the viability of public transportation but more on his mind is security.

“If there are large protests and if, as has happened in recent weeks, the police join in striking during the World Cup, what’s the security going to be like?” Troop asked. “If I have a challenge getting to the stadium that’s one thing, but if I encounter a big demonstration and the police are on strike, I’m feeling pretty insecure at that point.”

More than a police strike, some people are afraid of police brutality, Vickery added. When protests flared up last year during the Confederations Cup, what turned a small demonstration into a massive, national protest were scenes of police brutality.

During the World Cup the police will be joined by military security officers who have received special training.

“We hope that they’re less hot-headed, less authoritarian, but they will be tested,” Vickery said. “With the eyes of the world upon them, they need to be seen to be preserving the right to protest peacefully. On the other hand, they really don’t want these protests to be interfering with the smooth running of the tournaments.”

Vickery only really worries about two scenarios. One, what if Brazil gets eliminated early?

“My fear is that disappointment with the team’s performance will throw more fuel onto the fire with dissatisfaction with the way the tournament has been organized,” Vickery said.

And his second fear is that even if the games go well on and off the field, a significant portion of Brazilian society will still conclude that they paid too much to host this event and didn’t get enough back in return.

But it’s not all idoom and gloom when it comes to the upcoming game.

“My hunch is that people like William Troop, 640,000 foreign fans from all over the world, will sprinkle that fairy dust, the power of the event, the magic of the event,” Vickery said. “I think that once the ball gets rolling, the focus will be on the football.”