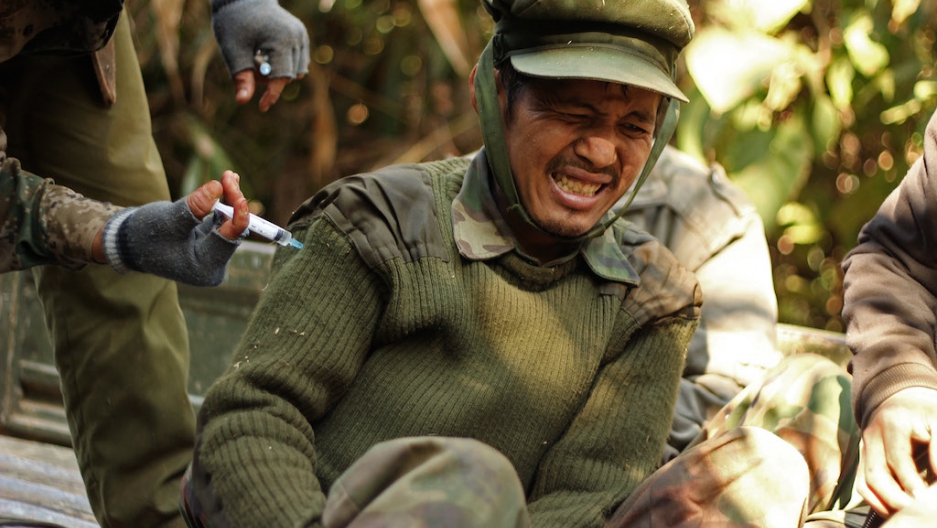 An injured rebel Kachin Independence Army (KIA) 3rd Brigade soldier gets an injection from a medic on Hka Ya mountain in Kachin province on January 20, 2013.
Credit: STR
Share

Then, the 55-year-old farmer says, they forced him and five other civilians to guide a battalion to a mountain outpost belonging to their enemy: an ethnic guerrilla force known as the Kachin Independence Army (KIA).

“I was afraid. We were forced to walk in front,” he said, recalling the incident days later, after his release. (GlobalPost has disguised his name to prevent retaliation.)

“The Myanmar army captain told us, ‘If the fighting starts, you will be the first to die.’”

After decades of military rule in the country formerly known as Burma, a nominally civilian government took office in 2011 and initiated sweeping political reforms, while also signing ceasefire deals with most ethnic armed groups and vowing to end rights abuses against civilians.

The United States and the European Union quickly re-engaged with the former pariah state, rolling back economic sanctions and initiating limited military-to-military cooperation in hopes of promoting respect for human rights.

But after three years of reforms, the army retains considerable political power, and fighting continues to rage in northern Myanmar.  Human rights monitors have long accused Myanmar’s military of war crimes, including the use of civilians as guides and porters, the destruction of villages, sexual violence against women, arbitrary arrests and extrajudicial killings. Despite improved relations with the West, GlobalPost’s interviews with recently displaced civilians indicate that rights abuses by the military remain common in ethnic conflict zones.

In late March, violence escalated after the Myanmar army deployed more troops to rebel-held parts of Kachin State and northern Shan State. Both sides have since reported frequent casualties.

The United Nations estimates that recent fighting has forced at least 2,700 people to flee their homes, with hundreds heading across the border to nearby China. They join more than 120,000 displaced civilians who have been languishing in camps in northern Myanmar since a ceasefire between the KIA and the government collapsed three years ago, on June 9, 2011.

US engagement with an abusive army

As new reports of abuses kept emerging, UN Secretary General Ban Ki-moon urged Myanmar in March to investigate past and current rights violations by the army, including crimes of rape and sexual violence.

US lawmakers concerned about the remaining political powers of the army and its record of rights abuses recently drew up a bill that would require further reforms from Myanmar before expanding US military cooperation. In April, the deputy chief of the KIA made an official visit to Washington and asked the United States to become involved in Myanmar’s peace process, while he questioned US military cooperation with the country.

Tom Malinowski, assistant secretary of state for democracy, human rights, and labor, says the United States remains concerned about ongoing fighting and alleged abuses in northern Myanmar. “We are particularly anxious about the safety of civilians and continue to urge the Burmese government to end offensive operations and allow unhindered access to those in need of [humanitarian] assistance,” he told GlobalPost.

Malinowski defended US military engagement with Myanmar, saying it takes place at a “minimal” level and consists of conducting exchanges on human rights law and the law of armed combat.

“[W]e see value in providing training to vetted and mostly junior officers — the future of the Burmese military — on issues such as preventing recruitment, demobilizing and rehabilitation of child soldiers; holding soldiers accountable for wrong-doings, such as rape or other crimes; and conforming to international humanitarian law,” said Malinowski, formerly of Human Rights Watch.

“We have no plan to lift the arms embargo, to sell or give military equipment to Burma, or to conduct any training that would help the [military] engage in combat,” he added. “There are valid reasons to move slowly in engaging the military and to preserve our leverage to press for reform.”

He noted that recent armed clashes “accentuate the need for a ceasefire and resolution of the underlying political causes of the conflict.”

The Myanmar government is currently attempting to achieve a nationwide ceasefire accord with an alliance of 16 ethnic groups, including the Kachin rebels, but the recent escalation in fighting threatens to derail this process.

In an attempt to defuse tensions, the Kachin Independence Army and the government held a round of bilateral negotiations last week, agreeing to form a peace monitoring commission that would help prevent further clashes. In March 2013, both sides also agreed in principle to end hostilities.

'They shot, and all villagers ran away'

On the ground in northern Myanmar, however, the government’s promises have done little to assuage fears over further attacks, with civilians worried about abuses not only by the military, but also by the rebels.

“There are so many peace conferences, but here the situation gets worse and worse,” said a Kachin Baptist Convention aid worker helping some 900 civilians who fled from eastern Kachin State to Namkham, a small town in Shan State near the Chinese border, in mid-April.

“These are newly displaced people,” said the aid worker, who asked not to be named. “Yesterday I picked up 23 [people]. They hid in the forest for three days without food. They only had drinking water.”

The families were given temporary refuge in a school building. Most had arrived one day before, settling down on the floor with the few belongings they could bring, looking exhausted and dejected.

In a half a dozen interviews, they alleged that the Myanmar army’s Light Infantry Battalion 323 had indiscriminately shelled their villages, looted or destroyed their homes and arrested at least nine men, either to serve as porters or to provide information in rounds of interrogations.

Ms. Shan, 53, said a 20-year-old woman was injured and four people went missing after her village came under attack. “We don’t know if they’re still alive or dead,” she said.

Asked how he felt about the plight of his congregation, the minister said: “I worry about their living [conditions], their feelings and their future. Now they are very unhappy. I would like to return them home. They also want to go home.”

Editor's note: For the protection of the reporters and sources, GlobalPost is refraining from naming the authors of this article.