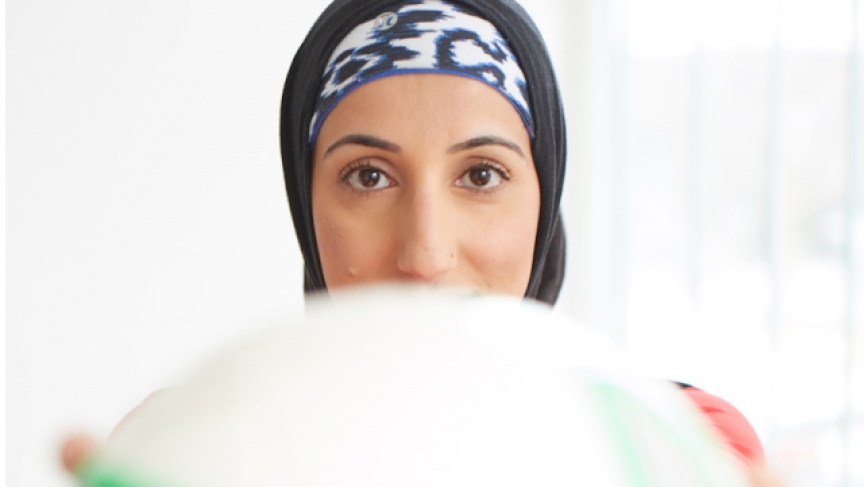 Shireen Ahmed remembers her first day on a soccer field clearly. She was five.

"We had these horrible yellow T-shirts as uniforms. I had two thick black braids and I'm pretty sure I was the only non-white kid there," she says. According to her father, she was, in fact, the only non-white player on the field.

The coach told Ahmed to put the ball in the net, and most importantly, not to use her hands.

"As a kid, your natural reaction would be to use your hands to catch the ball," she says, "but I'm proud to say that I didn't."

On that day, Ahmed says, she connected with the grass, the ball and the breeze. It was an unforgettable experience.

Ahmed was born to Pakistani parents in Halifax, Canada. Growing up, she watched her parents play sports. Before moving to Canada, in the late 1950s, her father rowed in the Karachi boat club and her mother was the table tennis champion at her university.

"We weren't allowed to call it ping pong because that was reductive. She was a very serious table tennis player," Ahmed adds.

Her parents enrolled Ahmed in various sports, including swimming and hockey, but it was soccer that she loved. She went on to play for her college team. That's also when she made an important decision: she decided to cover her hair, a requirement of her Islamic faith.

Ahmed says covering was something she decided she wanted to do. "In my family it was understood that it was my decision and if it was going to happen, it would," she says.

That was in 1997 and, at the time, not many Muslim women played soccer where she was living.

"I barely saw women of color on the field," Ahmed says, "let alone women who were Muslim and covered."

Ahmed called her coach and told her about her decision. "She just told me 'good luck with that,' and that was pretty much the end of the conversation," she recalls.

She says her teammates on the regional soccer team were "less than supportive" about her decision. "It was really inconvenient for them," she says.

"I don't actually think I had to choose between my Islam and my soccer, I don't think that ever has to be a choice, but I was made to feel like that and that was pretty horrible," she says.

Ahmed was not allowed to play for organized, recognized teams. So she played pick-up soccer.

But she constantly felt she needed the structure of a serious team. She tried to go back to organized teams several times and the decision to allow her to play was left to the referees.

"I think I registered for 25 games, suited up and showed up on the pitch, only to play in two of those games," she says. "The rest, when I got to the field, the referee said I couldn't play."

Then two years ago, she finally was allowed to play while covered. It was in 2012, after FIFA announced it would allow Muslim women to play soccer as long as they wore a safe head cover.

"I don't know if it was luck or things changing on that scene that I was never stopped again," she says.

For Ahmed, showing up on the field for the first time after all those years felt great.

"I felt so important. I felt as if my existence was validated at that moment. That was a really incredible feeling," she says.

Today, soccer plays an important part of Ahmed's life. Not only does she play seriously, she blogs about Muslim women in sports too.

She hopes to get more Muslim women interested in soccer — and in sports in general. Her own daughter is a goalkeeper.