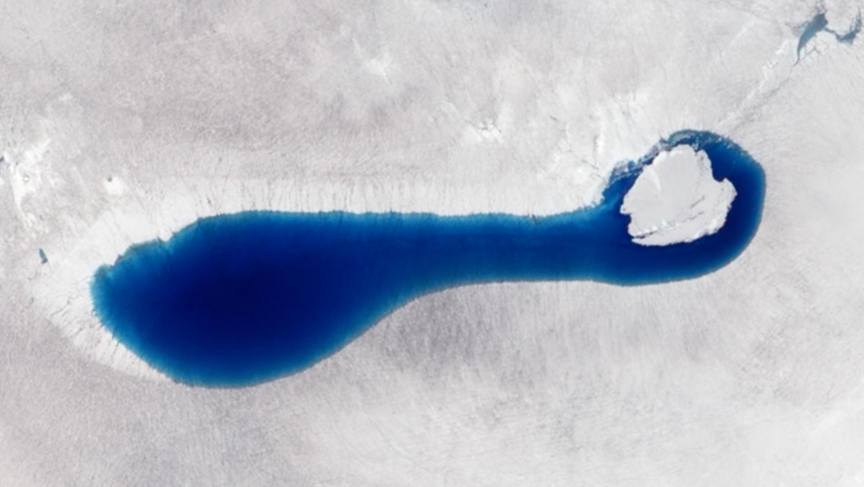 This natural-color image taken on July 4, 2010, by the Advanced Land Imager on NASA's Earth Observing-1 (EO-1) satellite, shows a sapphire-colored pond springing up as snow and ice melt atop the glaciers in southwestern Greenland.

Greenland has long has pure, white snow. But over recent years, that snow is becoming less white — seemingly a little bit dirtier.

For a long time, scientists thought this was because warmer weather was producing larger snowflakes, which tend to be darker. But new research revealed that the darker snow was happening at times and temperatures where larger snowflakes weren't possible.

So, now scientists are left to conclude that the snow is darker because of impurities in the snow: pollution, dirt and other particles, often from nearby regions warming earlier than usual. And this is a problem for you and me because darker snow absorbs light faster and, consequently melts faster. Greenland's melting glaciers are already predicted to add 20 centimeters to global ocean levels by 2100 — but faster melting would increase that. Science has the story.

Hezbollah is now stronger than any Arab state's army

Israel is casting a wary eye toward Hezbollah, the Lebanese Shiite militia that has long been a thorn in the side of the Jewish state. Evidently, though, Israel is taking Hezbollah even more seriously than ever before. Gen. Benny Gantz, a top Israeli military leader, said Hezbollah is stronger than most of the world's armies — stronger than virtually all of the Arab empires. He said a confrontation between the two is all-but-certain.

The Christian Science Monitor looks at the threat Hezbollah presents to Israel — as well as what is holding it back from unleashing a full-on attack.

Three English buddies decided they wanted to go to the World Cup — and they were going to walk. We first told you their story back in January and at the time, if you were like us, you probably scoffed at the idea their bar-born idea would actually come to life. But, turns out, not only did they succeed, they added a fourth member to their trio and picked up a lost dog on the way.

PRI's The World checks in on the English soccer fans who walked 1966 kilometers to the World Cup, while raising money to build a well in a poor Brazilian community on the way.

In a handful of cities around east and southeast Asia, you can venture into Pyongyang. Not the city, of course, but a North Korean restaurant named after the reclusive communist country's capital. The restaurants featuring singing, performing waitresses who take the stage in between dropping off your plate of North Korean delicacies.

Should we be afraid of the intelligence we've given our machines?

PRI's Science Friday looks at how real-world artificial intelligence scientists are beginning to grapple with the question of how much intelligence to give computers. They're starting to realize more intelligent isn't always better.

Record heat punished India over the weekend, with relief not expected until mid this week. Over the weekend, the capital, New Delhi, reported temperatures of 48.3 degrees — or nearly 119 degrees Farenheit. According to NDTV, the heat has been blamed for a number of deaths. Power outages and riots in recent days have also been blamed on the heat.