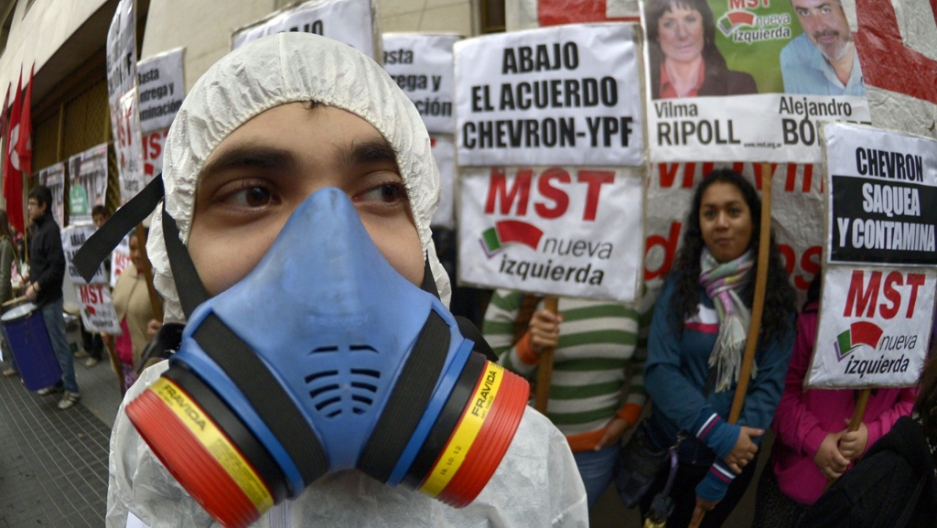 Protesters rally in Buenos Aires against an agreement between Argentina's state-owned oil company YPF and Chevron.
Credit: Juan Mabromata
Share
BUENOS AIRES, Argentina — On the surface, Neuquen province is a vast tract of Patagonian desert that extends 1,000 miles to the southern tip of Argentina. But deep underground lies one of the biggest oil and shale gas fields on Earth.

The Vaca Muerta or Dead Cow rock formation covers an area about the size of Maryland. It holds the world’s second-largest shale gas deposit, after China, and fourth-largest shale oil reservoir, according to the US Energy Information Administration.

Shale oil and gas are what the energy industry calls “unconventional hydrocarbons.” Getting to them requires high-intensity hydraulic fracturing, known as fracking, and drilling horizontally to fissure the impermeable rock.

The method is booming in the United States, getting some folks very rich and causing an uproar among environmentalists, along with a ban in New York state and recent upheaval in Ohio.

Mexico has the jitters, too.

And so do many Argentines. Small-scale fracking is already underway here and is now expected to explode in the Vaca Muerta.

Argentina has an expensive fuel problem: Local demand is rising but the country is importing more than it’s producing. President Cristina Fernandez de Kirchner says she’s determined to kick-start the shale gas and oil industry, in part to help reverse that trend.

Then the authorities set out to court other oil majors around the globe in order to raise $37 billion to develop the Vaca Muerta, which YPF discovered in late 2010.

In April, YPF struck a second deal with Chevron, one of the world’s biggest oil companies, for $1.6 billion. Together they will drill 170 new wells in the Vaca Muerta this year. That’s on top of 200 existing wells, according to Ernesto Lopez Anadon, president of the Argentine Institute of Oil and Gas.

The deals with Chevron and another US company, Dow Chemical, as well as the government’s push to develop Argentina’s shale resources, have triggered fierce conflict here. These are four of the biggest clashes:

The government announced the YPF expropriation with a heavy dose of nationalist rhetoric. So when it started cozying up to the likes of California-based Chevron, prominent opposition figures cried hypocrisy.

Sen. Fernando Solanas equated a previous $1.2-billion Chevron deal signed last year with “treachery.” He called a government decree relaxing some restrictions on energy companies investing here — which opened the door to Chevron — “an attack on Argentine interests.” Fernandez de Kirchner might even be investigated for “abuse of authority” for having signed the decree.

Small political organizations have taken a similar stance. “We condemn this snatching away of our sovereignty,” said the leader of one nationalist group here that has protested against Chevron. “Mosconi never wanted us to work with Americans.” He was referring to Enrique Mosconi, who in 1922 became the first head of YPF and was an ardent proponent of Argentine energy independence.

Counterpoint:
President Fernandez de Kirchner has hit back. “They said we couldn’t bring in foreign investment, that we couldn’t inspire confidence,” she said in a speech, referring to international investor worries over Argentina’s political and economic climate. “They’re never happy.”

2. Provincial politicians: Not in my backyard

Provinces in Argentina, not the federal state, own the oil and gas in their territories. To clear the path for Chevron, Neuquen’s lawmakers had to approve a controversial law granting an extension, until 2048, of YPF’s permit to drill in the Vaca Muerta. That angered locals who believe Neuquen is giving up control of its resources. As lawmakers debated, police fired tear gas and rubber bullets at a few thousand protesters outside the provincial parliament building.

Some opposition parties had drafted a document called “Neuquen no se entrega,” or “Neuquen will not give in.” It called for amendments that would have mitigated the environmental and social impact of the Chevron deal, and given the province increased economic benefits. But the law passed unchanged.

“It was inalterable; we couldn’t change a period or a comma,” said Raul Godoy, a former lawmaker who fought against the law. “They wiped the floor with us.”

Counterpoint:
Neuquen’s provincial energy firm GYP has its own drilling permits. It signed a deal with a German firm last year, and major global players Shell and Exxon are now expected to bid to join GYP in developing the Vaca Muerta.

An influential national government official recently vowed that the administration will not seek to federalize oil resources, a fear raised by provincial politicians.

3. Environmentalists: Get the fracking out of here

Fracking uses a high-pressure mix of water (93 percent), sand (6 percent) and chemicals (less than 1 percent) to break through bedrock. Environmentalists say the process contaminates groundwater and triggers minor earthquakes. Energy companies need huge volumes of water for fracking, which also causes concern over the raiding of water supplies. Fracking is currently banned in New York state and France due to worries about its environmental impacts.

Environmentalists here are particularly opposed to Chevron because of its legal battle over pollution in the Ecuadorean Amazon. They also say that by opting for fracking President Fernandez de Kirchner is building on past policies, particularly in the mining sector, that show little regard for the environment. “It's a new chapter in 'The Open Veins of Latin America,’” said Enrique Viale, president of the Argentine Association of Environmental Lawyers, referring to Eduardo Galeano's hugely influential 1971 book that tells how foreign countries pillaged the region’s resources throughout history.

Counterpoint:
On its website, YPF says most of the shale in the Vaca Muerta is 1.5 miles beneath the surface, which reduces the risk of polluting groundwater. Likewise, the oil and gas institute says precautions are taken when drilling to prevent contamination. Water depletion is not a worry, the institute adds, since fracking will require just 0.1 percent of the water in Neuquen’s major rivers over the next five years. It also ensures that seismic waves triggered by fracking are so small that they are imperceptible to humans.

The Mapuche people who claim ownership of the land where shale oil and gas exploration will go ahead were not consulted before the Chevron deal. But Argentina signed on to a 1989 international convention that gives indigenous people the right to prior consultation, so the Mapuche say Chevron’s expansion here is illegal.

“Our great fear is that the cost of trying to achieve energy sovereignty through fracking will be the lives of our people,” said Lefxaru Nahuel, a representative of the Mapuche Confederation of Neuquen. The confederation, Nahuel said, worries its chief water source, a giant lake, will be poisoned. It attributes some illnesses in the community to pollution from previous oil and gas drilling.

Last year, the Mapuche occupied wells and blocked access to a YPF-run oil field. And Nahuel said the protests will continue. “We want to live with dignity on our land,” he said. “This battle will last for years.” The confederation also took part in the first “International Anti-Chevron Day” in May, which drew support from San Francisco Bay to Ecuador.

Counterpoint:
A longstanding provincial government decree in Neuquen, which was only overturned more than a year after the Chevron deal, restricted the rights of indigenous people, according to local news media. Under the decree, there was no requirement for prior consultation before the approval of industrial projects affecting them.