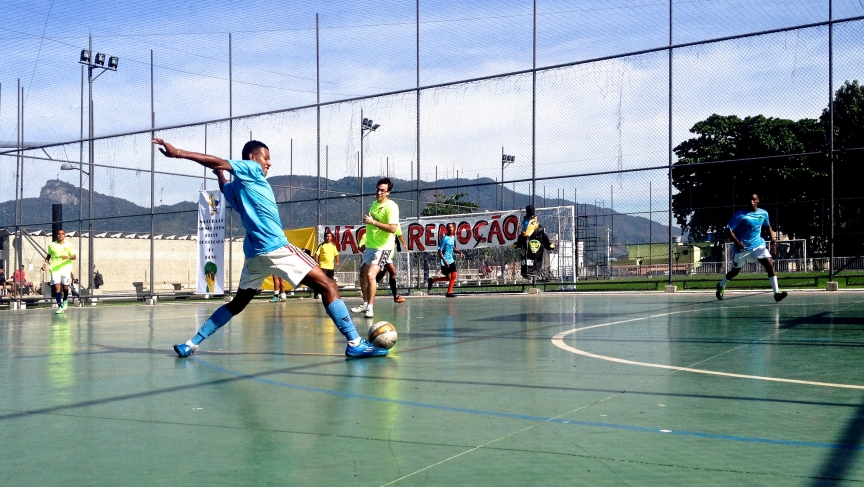 During past World Cups, the atmosphere in Brazil has been festive and people were obsessed with whether the Brazilian team could win it all. But this year, in the midst of social unrest and protests, an increasing number of Brazilians don't really care what happens on the field.

Days before the start of the World Cup, 52-year-old Brazilian government administrator Edson Lucas was watching a local soccer game with two friends at a bar in Copacabana. When asked his opinion about the Cup, he thought for a moment before finally answering, “I am particularly impressed with how unexcited people are.”

His two friends, an accountant and an auditor, nodded in agreement. Lucas says that in Rio, past World Cups brought excitement and celebrations in the streets. “Now I’m apprehensive,” he continues. “There’s been all this monstrous spending — billions and billions of reais. The whole thing was over-billed. That is to say, it was robbed.”

Before a single match ball has been kicked, many Brazilians have a sense of disappointment in this World Cup. A Pew Global Research poll released last week found that 61 percent of Brazilians think hosting the cup was a bad idea for the country.

“The whole process has been very exhausting,” says school teacher Marcia Pinheiro, 39. Pinheiro lives near Largo do Machado, a plaza in Rio where several protests passed through last year on the way to the governor’s mansion. “At first I was excited about the protests, but now I am tired of those too.”

In addition to the street protests, which have continued on a smaller scale through recent months, there have been a rash of labor strikes throughout the country. Police stopped working in Salvador, in Brazil’s northeast, which led to looting, a rise in homicides, and the army stepping in to restore order. In São Paulo, a public transport strike led has led to huge traffic jams and weeks of headlines discussing lentidão, or “the great slowness.” Unless a deal is made with the São Paulo metro union, that’s what will greet fans for the opening match on Thursday.

In past years the phrase Imagina Na Copa has become common in Brazil. It means, "If you think things are bad now, imagine how bad they will be during the World Cup.” But the phrase seems almost unnecessary now, because everything that could happen has already begun.

In the favelas above Rio, residents have held a "People's Tournament" to raise awareness about the negative side of the World Cup. Players include people who've lost their homes or leisure space because of infrastructure projects in the city related to the World Cup and the Olympics.

One tournament organizer is Victor Lira, 32, resident of the Santa Marta favela and member of the People's Committee of the World Cup and Olympics. Lira says it’s not just him, or just Brazilians, who have felt deceived by the World Cup, but also people in other host countries such as South Africa. “I haven’t heard of another that fought back as much” as Brazil, Lira says. “Now I talk to people from other countries almost daily about what is really going on.”

Lira says it's possible to enjoy soccer locally or internationally without excessive spending and human rights violations, but that’s not how this World Cup has been carried out.

The People's Committee is just one of several groups trying to speak out against the cup — without getting pepper sprayed. Others take a more humorous approach. A group of artists in Rio called the Vinhetando Collective wants people to take advantage of the fact that Thursday's opener falls on the Brazilian version of Valentine’s Day.

One of their slogans is "Make love, not FIFA." Sociologist Diogo Lyra was surprised when over 40,000 people RSVPed for the Facebook event he created for this, “and pleased, because the goal is to make people comfortable with making a critique. Humor is just an opening to the dialogue about what is going on.”

Lyra says that among those who are following this dialogue, “today, almost any 20-year old can name the corporations behind the biggest World Cup projects — Camargo Correa, Andrade Guteirrez, Odebrecht. People now understand that the World Cup is a business.” For Lyra, the democratic legacy of the cup comes from those who are critical of it. “How many people march in the street matters, but what is more important is the shaking up of society, the forming of new groups that are going to continue to act politically after the cup is over. For me, that is already a victory.”

To be sure, plenty of Brazilians are still eager for the actual soccer to begin. As Brazil's first game draws near, some festive flags and banners are inevitably appearing along Rio's streets. Newspaper stands buzz with people buying and selling World Cup trading cards. Taxi driver Luis Angelo de Oliveira, 48, who trades cards for his daughter, admits he would have preferred that Brazil invest in something other than stadiums.  But at this point, he says, the show must go on.

“Of course I'm going to be cheering for Brazil,” says Oliveira. “I'm just going to be watching on TV instead of at the stadium. The tickets are too expensive.”