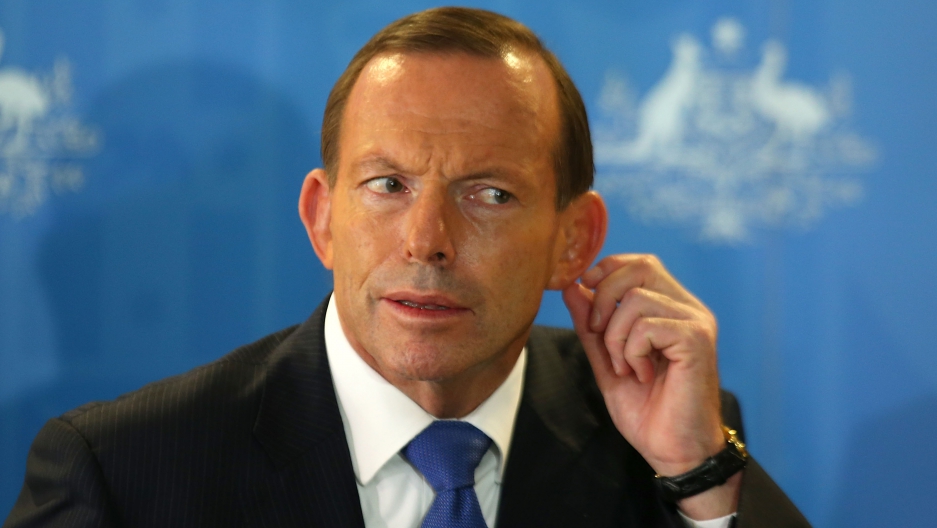 Australian Prime Minister Tony Abbott listens to a question from a reporter during a press conference at RAAF base Pearce on March 31, 2014 in Perth, Australia.
Credit: Paul Kane-Pool
Share

The Australian government’s slash and burn approach to fiscal management doesn’t appear to have stretched to the God Squad.

The right-wing conservatives have so far announced cuts to aged care, education, the environment, science and hospitals, plus introduced controversial new fees for doctors' visits.

Yet Prime Minister Tony Abbott — a staunch Catholic who opposes gay marriage and once described abortion as “the easy way out” — has somehow managed to find $226 million for a school chaplaincy service designed to support the “emotional and spiritual wellbeing” of students. That’s like the US government allocating about $2.2 billion, relative to the size of the economy.

The program — already the subject of parent-led High Court challenge over religious funding in the secular state school system — used to allow schools to use the money for a church-backed chaplain or a secular welfare officer.

However under Tony Abbott, that all changes, with the government outlawing funding for secular support, raising the ire of teachers’ groups and gay rights organizations and outraging schools forced to lay off welfare officers and youth workers.

Questions — first aired back in 2011 — have resurfaced about the role and effectiveness of church chaplains, with critics arguing that it’s hard to justify $226 million for a program that has never been independently evaluated.

Angelo Gavrielatos, president of the Australian Education Union, called the funding “completely misdirected” and said it had come at a time when funding for kids with disabilities was being cut.

One leading Australian website came up with a list of alternative ways to spend a quarter of a billion Aussie dollars.

There are also concerns over whether church chaplains can offer independent advice and support to kids from minority faith backgrounds or to gay students, with some Christian groups providing chaplains already linked to homophobia.

Justin Koonin, of the NSW Gay and Lesbian Rights Lobby, said there is a risk that chaplaincy services would not provide the support young gay kids need.

“Many religious organizations are welcoming and progressive, but many others are not,” he said. “The fact that religious educational providers are exempt from anti-discrimination laws means that many young people are susceptible to discrimination and can do little about it.”

Indeed, Access Ministries, a leading provider of chaplains to schools, has as one of its core values its “commitment to teach, live and commend the Christian faith through the ministry of Christian religious education and pastoral care” — hardly a ringing endorsement for the separation of church and state.

Following a situation at a neighboring school where a school chaplain told a gay boy he would go to hell after coming out, Gunnedah South’s parents and teachers voted overwhelmingly to maintain the division between church and state.

The school currently uses its $18,500 a year from the existing school chaplaincy program to employ a part-time, fully qualified social worker who provides emotional support and confidence building programs for the children, many from low socio-economic backgrounds.

Melinda McCulloch, the vice president of the school’s parents’ and citizens' association, said the government’s decision to cut secular welfare officers from the chaplaincy program would mean Gunnedah South would lose this service at the end of the year.

“Secular welfare officers who have been working beautifully and building kids up in the community will now have to leave their schools,” she said. “The school chaplaincy program is meant to be about the social and emotional wellbeing of kids and that’s exactly what our welfare officer is providing.

“Often it’s about providing the types of support they may not be getting at home — for instance she’s introduced a really successful mentoring program," McCulloch said. "I know there might be some amazing chaplains out there who might be very good, but as far as we’re concerned we already have the best person for the job, and because of these changes we’ll be losing her at the end of the year.”