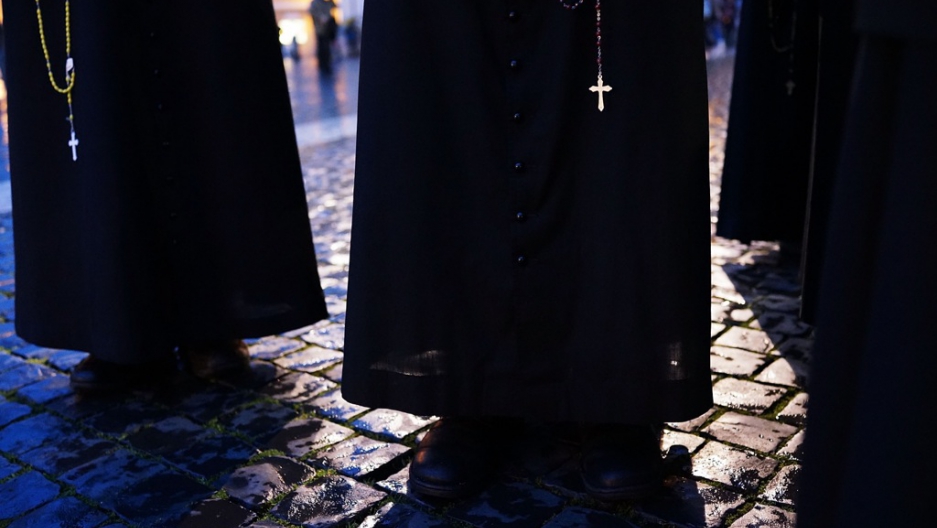 Editor's note: This is a developing story. Since it broke, the Vatican has intervened by ordering the dismissal of the problem priest and firing the Paraguayan bishop who promoted him.

MONTEVIDEO, Uruguay — It’s been a weird week in Paraguay.

Early on Tuesday, GlobalPost published this story about rogue priest Carlos Urrutigoity, an Argentine national long accused of abusing young men who was recently promoted to second-in-command of the diocese of Ciudad del Este.

By Thursday evening, the story had caused a deep schism in Paraguay's Catholic Church, with the country’s two most powerful bishops trading jabs and insults over the controversial priest. In Asuncion, the country’s capital, the archbishop was defending claims of homosexuality from the bishop of Ciudad del Este while simultaneously calling on the Vatican to fully investigate Urrutigoity.

Meanwhile, after Pope Francis announced a “zero tolerance” policy on sexual abuse last week, Paraguayan activists involved in the Urrutigoity scandal question how long the problem priest will remain in service and in contact with young people.

Let’s break down the week’s events:

GlobalPost publishes this story, the result of an investigation into Carlos Urrutigoity, who was accused in a 2002 lawsuit of abusing at least two young men in the diocese of Scranton, Penn.

Urrutigoity, who resurfaced in 2008 in rural Paraguay, was promoted last year to the position of Vicar General of the diocese of Ciudad Del Este.

Among the most shocking elements of the story: a March 15 statement from the bishop of Scranton calling Urrutigoity a “serious threat to young people.”

Urrutigoity denies ever molesting anyone, maintaining that he’s the victim of a smear campaign.

The story notes that ABC had previously reported about Urrutigoity back in 2008, when activists first discovered the problem priest was in the country.

The story soon garners hundreds of comments on ABC’s website, and ABC quickly begins to post follow-ups (as of Friday afternoon, ABC had published 14 posts on the Urrutigoity scandal.

ABC publishes this story announcing that Monsignor Pastor Cuquejo, the archbishop of Asuncion, told a local radio station that an investigation must be “reopened” into Urrutigoity in the light of GlobalPost’s story.

The investigation should be carried out directly by the Holy See in Rome, Cuquejo said.

ABC runs another story about Urrutigoity, quoting the editor of a local newspaper in Ciudad del Este as saying the problem priest was placed in the city because the church “didn’t know where to put him.”

ABC’s fifth story on the Urrutigoity scandal in 24 hours cites a statement penned by Bishop Rogelio Livieres Plano, the religious leader of the Diocese of Ciudad del Este, dismissing the GlobalPost story as a “vicious attack” and claiming the priest was already fully investigated by the Holy See.

As far as the diocese is concerned, the case is closed, the story says.

By Thursday morning, the story has taken a strange turn.

This ABC story describes how Livieres Plano delivered a diatribe against Asuncion’s Archbishop Cuquejo at a rally in Ciudad del Este on Wednesday night.

Livieros Plano’s rant ended with the bishop claiming Cuquejo was himself almost driven out of the church over accusations that he is gay.

“You shouldn’t throw stones if you have a glass roof,” ABC quoted Livieros Plano as saying.

According to the ABC story, Livieres Plano said Cuquejo was accused five years ago within the church of being gay. Cuquejo is a “bad person,” the story quotes Livieres Plano as saying, and should be more charitable toward other members of the church.

One details the old feud between Livieres Plano and Cuquejo, another details a statement by the US-based organization the Survivors Network of those Abused by Priests calling on Urrutigoity to be suspended, and one more details a plea for dialogue between the feuding bishops by Monsignor Claudio Gimenez, president of the Episcopal Conference of Paraguay.

ABC runs this story stating that Livieres Plano plans to apologize to Archbishop Cuquejo, attributing the news to officials from the Episcopal Conference of Paraguay.

And that just about brings us up to date.

Watch this space to see what happens next.

*All times given are local.