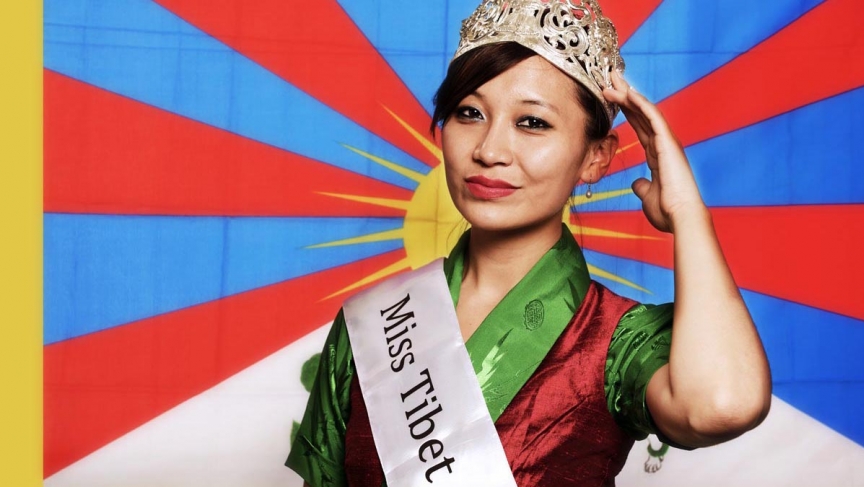 China considers Tibet to be part of China, not an independent country. And there are those who say the very idea of a beauty pageant betrays Tibet’s Buddhist roots. In 2004, the prime minister of the government-in-exile declared it to be “un-Tibetan.”

Though the Dalai Lama doesn’t seem to mind. He’d just like to see the pageant be a little more equal in gender.

"If more people want that, go ahead. I think it should not be only female, but male also," the Dalai Lama said.

The Miss Tibet pageant was founded in 2002 by a journalist and event producer named Lobsang Wangyal. He started it, in his words, to give Tibetan women a platform to showcase their aspirations and talents. And to bring international attention to Tibet.

She’s never actually been there, though. And very few of the Miss Tibet contestants have. They’ve grown up scattered around the world, in India, Australia, Switzerland and the US. Tenzing spent her childhood in a Tibetan settlement in Southern India.

"I knew about the Miss India contest, and I always thought that was so cool, but we were like, 'We’re not Indians, we can’t participate in all that,'" Lhamo said.

She first heard about the Miss Tibet pagent in 2002 after she moved to Madison, Wisconsin. "The Tibetan community is so small, nothing really gets around without everybody knowing about it."

Beauty pageant contestants will give you lots of reasons why they’re competing: for the money, for their modeling career, for world peace. Tenzing wanted to bring attention to the Tibetan people. And she thought the sash and crown could do it.

"If I go around saying 'Hey! My name is Tenzing, do you want to learn about Tibet?' People wouldn’t pay as much attention as if I say, 'Hey, I’m Miss Tibet and I want to talk about Tibet.'"

Last winter, she mustered the courage to apply online. But when the organizer got in touch with her, she found out it wouldn’t be your typical pageant, with disco balls and dance numbers.

"He kind of hinted, 'You might not have any competition,'" she said.

The day before her flight to Bylakuppe, India, a Tibetan settlement in southern India, she learned that all the other contestants decided not to compete. There’d been a scandal over the judging in 2011. And the following year, there was no competition at all. So Tenzing won before she even left Wisconsin.

"I just always joke about: 'I’m the default Miss Tibet,' and I have had people talk about it on the Internet. 'Oh she won because she didn’t have any competitors,'" she said. "Sometimes it makes me mad and then I’m like, whatever. It’s kind of funny."

Despite the lack of competition, Lobsang told her the show would go on.

"He was trying to tell me that there would be a show and I would have to perform and everything," she recalled. "I told him, 'You know, I’m not the performing type, I’m not going to dance in front of people.' I said: 'I’ll give a speech.'"

So she spoke before a small gathering about oppression in Tibet and the rising number of self-immolations there.

"That is one of the most important things in life — having the dignity of living as a human being with your voice being heard and that’s not happening in Tibet. It’s being suppressed," Lhamo said.

It’s not the first time a Miss Tibet has taken a stand.

Back in 2006, when Miss Tibet competed in the Miss Tourism Pageant in Malaysia, representatives of the Chinese government demanded that her sash say “Miss Tibet-China.” She refused to compete. It happened again in 2011 at the Miss Asia Pacific World competition: China wanted Miss Tibet’s sash to read “Miss Tibet-China”.

She competed as “Miss Tibet Swiss,” instead.

It may seem kind of trivial, but Tenzing sees power in what a pageant sash says. "Seeing Miss Tibet with the sash 'Miss Tibet' out with the rest of the world, it kind of makes you feel proud and gives people hope ... people are actually receiving us and acknowledging us."

This weekend, Tenzing Lhamo will surrender her title to the next winner of the Miss Tibet pageant.

It’s a safe bet that the winner will be Tenzin Yangzom, because for the second year in a row, the Miss Tibet beauty pageant has only one contestant.