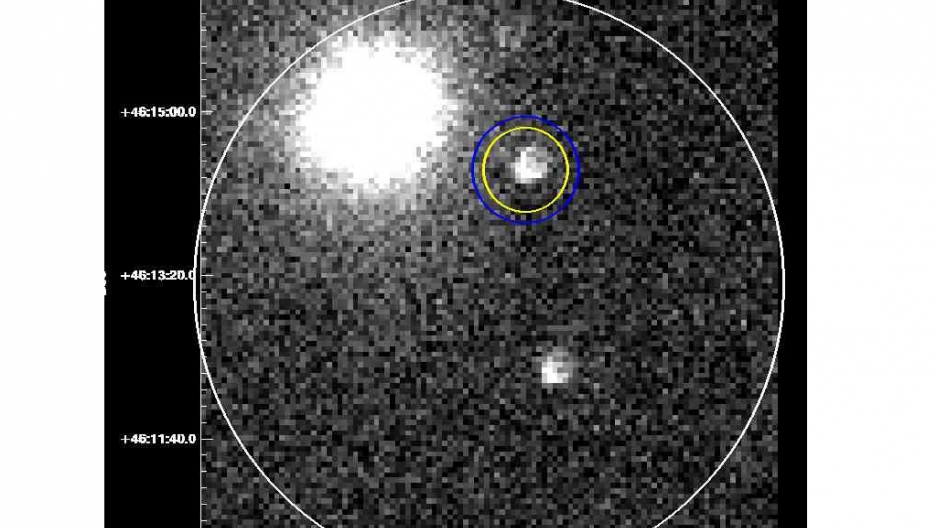 It took 12 billion years, but light from a massive explosion that occurred shortly after the Big Bang has just reached Earth.

The rare gamma-ray burst could help scientists understand more about the early universe.

Recorded as GRB 140423A, the explosion was first observed in April by the telescope Rotse-IIIB at an observatory in western Texas owned by Southern Methodist University.

The area of the explosion's peak afterglow, circled in blue and yellow, can be seen in the image above. A bright star sits to its left.

Gamma-ray bursts are believed to be the catastrophic collapse of a star at the end of its life.

"As NASA points out, gamma-ray bursts are the most powerful explosions in the universe since the Big Bang," Farley Ferrante, a graduate student at Southern Methodist University who monitored the explosions with astronomers in Hawaii and Turkey, said in a release from the university.

"These bursts release more energy in 10 seconds than our Earth's sun during its entire expected lifespan of 10 billion years."

Scientists weren't even able to detect visual light from gamma-ray bursts until technology improved in the late 1990s. Gamma rays have the shortest wavelengths and can only be seen using special detectors.

To put the age of the latest discovery into context, scientists believe the Big Bang occurred 13.81 billion years ago.

GRB 140419A, meanwhile, exploded about 12.1 billion years ago, which is "only about one and a half billion years after the universe began," Ferrante said.

The video below shows an estimated 500 gamma-ray bursts detected by NASA's Swift satellite in recent years and identifies some of the more notable bursts.