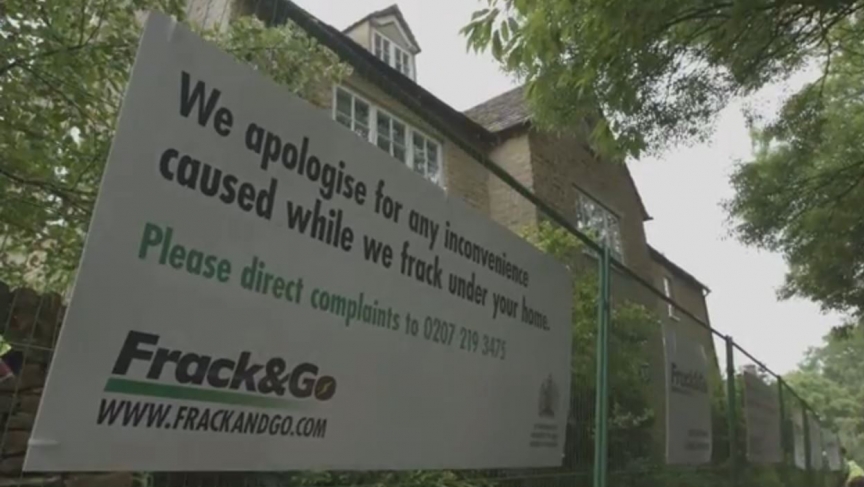 Greenpeace set up a faux fracking operation outside the country home of British Prime Minister David Cameron this week to protest a government plan they say would allow fracking companies to drill under private property without the owner's permission.

Greenpeace has pulled off some clever stunts over the years. And whatever you think of its politics, the one they staged this week at the country home of British prime minister David Cameron was classic guerrilla theater.

“I'm so glad David Cameron's not a NIMBY, and is letting us frack outside his own front door. That’s real leadership,” a straight-faced Greenpeace activist says in a video it produced showing off the group's early morning stunt setting up a bogus gas fracking site just feet from the door of the prime minister's house outside of London.

The action was the latest volley in a long-running battle over fracking in the UK, and it came in response to seemingly inoffensive legislation announced by Queen Elizabeth II this week in her annual address to parliament.

Along with a litany of other proposals, the Queen announced that Cameron’s government will offer a bill to “enhance the United Kingdom's energy independence and security by opening up access to shale and geothermal sites.”

It sounds simple enough, but behind that "opening up access to shale" language is an effort by the government to change the laws about drilling for gas under people's homes.

“The prime minister is going to open up half the country to fracking companies,” says Greenpeace spokesman Lawrence Carter. “So ahead of that, he's going to strip homeowners of their right to object to drilling underneath their property.”

Under the new law, companies wouldn't need permission from homeowners to drill under their houses and land for shale oil and gas.

That's what prompted the activist group to send a small contingent of hard-hatted activists to Cameron's home where they set up fences with signs saying "we apologize for any inconvenience caused while we frack under your home."

Greenpeace points to surveys that it says show three-quarters of Brits oppose the new move.

Fracking has been associated with water contamination, methane leaks and small earthquakes in the US and elsewhere. But it's also brought an unprecedented boom in relatively clean natural gas, which is why the technology has caused a real rift among environmentalists.

The British government wants to bring the technology to the UK, but they've run into widespread opposition, including from thousands of homeowners who've withheld permission to drill under their properties.

For its part, the industry says Britain today is highly dependent on natural gas, and that other domestic sources are running out.

“Eighty-three percent of our homes currently get heated by gas. That gas by 2030 will come from Qatar, Russia and other places,” says Ken Cronin of the UK On Shore Operators Group.

Cronin points out that the gas under British territory is commonly owned, which justifies pumping it out from under private property.

But Prime Minister Cameron insists no one will see frackers just show up outside their homes.

Cameron, in fact, says the new law would not make it “legal to go onto someone’s property and frack against their will. That is simply not the case.” But it seems what the new legislation would allow is for horizontal wells to be drilled under people's property from a nearby site.

Fracking opponents say the question of permission is hardly the only issue. They say Britain should pursue carbon-free renewables much more aggressively.

They also object to the technology in principle, pointing to evidence suggesting it can poison water supplies.

After setting up their faux drilling operation and shooting their video outside Cameron's home this week, the Greenpeace activists were shooed away by local police.

And for once, the activists said, they were on the side of the cops.

"We have to say the police have a point,” a Greenpeace spokesman said. “You shouldn't be allowed to just turn up outside someone's home and start fracking under their garden without their permission.”