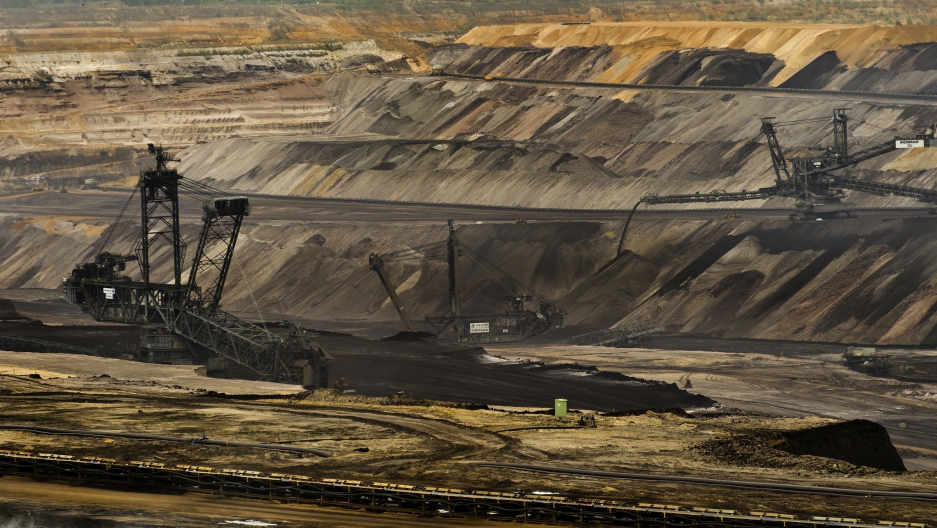 PROSCHIM, Germany — There’s nothing extraordinary about the picture of Johannes Kapelle mowing hay with his tractor in a field behind his rustic village house. Except for the dozen wind turbines towering behind the nearby trees, the slow turning of their blades matching the ambling pace of Kapelle's brindle cow. And the glittering of solar panels on the roofs of houses along the main street.

This tiny village near the Polish border in the east may be an unlikely frontrunner in the fight to wean the world off fossil fuels. Like many small German towns, however, it has capitalized on generous green energy subsidies to create a cottage industry in renewable power production.

But not for much longer.

Ongoing problems with pricing structures and new concerns about energy security — thanks partly to the crisis in Ukraine — have prompted plans to bulldoze everything in sight in order to expand strip mining of the world's dirtiest fuel: brown coal.

That makes little sense to Kapelle. The stout 77-year-old with a ruddy face and bushy eyebrows says Proschim produces enough electricity for 15,000 households.

The return to coal is overshadowing Germany’s ambitious plans to virtually eliminate greenhouse gas emissions and boost the share of renewables to 60 percent of total production by 2050. In contrast, the American plan unveiled by President Barack Obama on Tuesday targets a 30 percent cut in emissions by 2030.

Unveiled shortly before Japan’s nuclear meltdown in Fukushima in 2010, the “Energiewende,” or “energy transition,” evoked German reunification after the fall of the Berlin Wall, known as “die Wende” or “the transition.”

For Chancellor Angela Merkel, it also echoed John F. Kennedy's 1962 declaration that America would soon put a man on the moon.

Then Fukushima prompted Merkel to speed up plans for Germany to shut down its nuclear power plants.

Like the moon landing, the Energiewende was never going to be easy or cheap. But despite early successes in places such as Proschim — which have enabled Germany to get 25 percent of its power from renewables — the program faces mounting challenges.

Many Germans believe the emphasis on renewables has increased prices for consumers. And lobbyists from the nuclear and conventional power industries are proving to be tougher adversaries for Merkel than the Soviets were for Kennedy.

As Obama announced his plan to take on America's coal industry and the EU touted a supposed breakthrough in climate change negotiations this week, the government of Brandenburg, the state where Proschim is located, approved plans to relocate 800 villagers and level the town for a 5,000-acre open-cast coal mine.

Critics say it will result in an additional 200 million tons of carbon dioxide emissions released into the atmosphere.

That's a fifth of Germany's total emissions for 2013.

The plans would also flatten two wind parks, a thicket of solar-powered houses and businesses and a biogas plant that collectively account for about 15 megawatts (15 million watts) of green energy capacity.

Were it a one-off decision, the scheme might be explained away by the disproportionate influence of the Swedish power firm Vattenfall, virtually the only investor in the fading former East German region, or the local population's historical ties to the coal mining industry.

But brown coal mining is coming back across Germany — billed as a “bridge” to the renewable future by the Brandenburg government that approved the Proschim mine — and it’s erasing the gains made by Merkel's green energy drive.

Although renewables account for as much as three-quarters of Germany’s energy supply on peak production days, the country’s total carbon dioxide emissions actually rose 1.2 percent last year — largely because of a matching increase in the consumption of brown coal.

This year, Germany is expected to add more coal-fired capacity than it has in more than a decade.

The reasons are clear.

The brown coal projects already cleared for the Lausitz area surrounding Proschim would alone provide enough to cover German demand through 2050 if not for energy exports, says Thomas Burchardt of Klinger Runde, a grassroots group that opposes the expansion.

In Germany, brown coal is back.

Renewable energy, on the other hand, faces a complex set of challenges.

Building vast amounts of green energy capacity isn’t enough because the supply from wind and solar farms comes in dramatic peaks and valleys.

Current methods for storing excess power produced during the peaks — pumping water uphill for later use as hydropower or using the electricity to create hydrogen — are expensive. So turbines are often simply taken off the grid when they're producing too much power in order to stop them from creating surges that would result in brownouts.

Conventional power plants must provide a steady supply to make up the difference.

Plants that burn natural gas are relatively flexible. But coal-fired plants must also be disconnected from the grid when their electricity isn’t needed, because the heat required to create steam to power their turbines can’t be generated or stopped immediately.

Although the Energiewende's new policies succeeded in spurring a huge growth in renewables, the pricing structure hasn’t been adjusted to encourage conventional producers to focus on “flexible” plants that can be powered on and off to meet demand, power companies point out.

Nor does the price of brown coal factor in the cost of environmental damage, Greenpeace activist Anike Peters says.

“It's a big mistake to think that lignite [brown coal] is a cheap energy source because it gets a lot of subsidies and all the follow-up costs aren't integrated into the price,” she says. “Those costs are paid by the state or the people, not the energy companies.”

More from GlobalPost: In France, ghosts of World War II are still very much alive

As demand for cheap, reliable energy trumps the drive to cut emissions, another important factor is strengthening energy companies’ hand: the crisis in Ukraine. Russia’s standoff with Western countries is boosting calls to lessen dependence on Russia, which supplies Germany with 40 percent of its natural gas.

The conflict prompted Merkel herself to remark that “all of Germany's energy policies must be reconsidered.”

Although the country hopes to diversify its supply by building new terminals for liquefied natural gas imports from the US, its only real alternative now to Russian gas is brown coal.

Without another big idea from Merkel, that spells certain doom for Proschim.