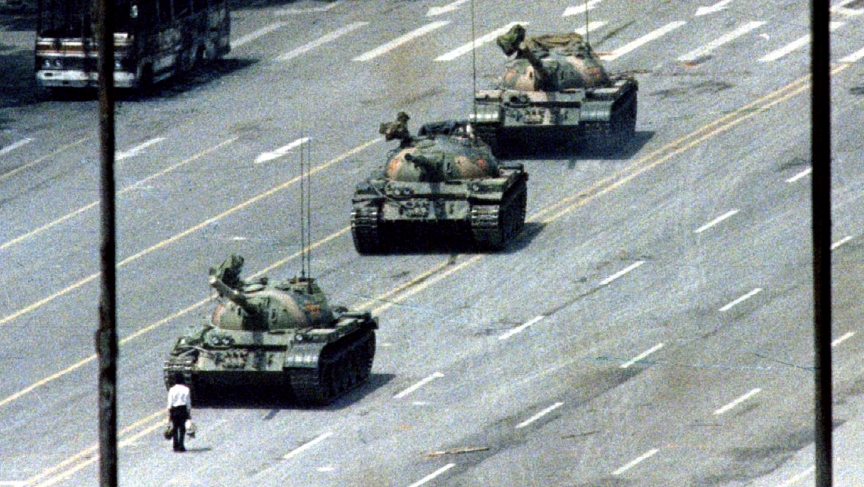 The famous 'tank man', alone and unarmed, stands passively in front of a convoy of tanks on the Avenue of Eternal Peace in Tiananmen Square on June 5, 1989. The iconic image is banned in China but has permeated popular and protest culture around the globe.

The Simpson's once mocked the Chinese response to the Tiananmen Square protests, by depicting a fake plaque that read: "On this site, in 1989, nothing happened."

That picture is once again making the rounds on Facebook. One commenter wrote, "How sad is it that the Simpsons are an actual portrayal of how Tiananmen is officially 'remembered' in China."

The whitewashing of history is certainly a joke. But it only works because of the truth to it. Kai Wong, who works on the BBC program Newshour in London, was born and raised in Beijing. But she was just 1 at the time of the Tiananmen protests and crackdown. Now 26, she still struggles to fully understand what happened in 1989.

"When you go to Tiananmen Square, nowadays you see the giant portrait of Chairman Mao and you see the spacious square," she says. "But you can hardly think about the 'tank man' who stood exactly in the same place where you are standing today, 25 years ago."

The tank man of course refers to that famous picture of a lone protester standing defiantly in the path of a tank during the crackdown.

Wang says she didn't even hear about Tiananmen until she was 14. She was still in Beijing then, and she learned about the 1989 protests from a citizen journalist. She admits there are still holes in her knowledge of the protests. "To be honest, I still know little about what really happened, or I'm still trying to find out the truth," she says.

She says it wasn't talked about in public. The topic is banned. There are no textbooks about or public references to it. And you can’t learn about it on the Internet, or at least, you can't Google it because of censorship. She says she really started learning about the event when she moved to the United Kingdom. She started to read the “forbidden books.” But she says there's conflicting information about the events. For people of her generation, 20-somethings, reports and stories about Tiananmen resemble the pieces of an unfinished jigsaw puzzle. “You never get to know a full picture of what really happened on the day,” she says.

The curious part is when Wang and others learn about Tiananmen, their views about their country don't really change. She says the event feels irrelevant to her. She equates it to the “Born-Free Generation” of South Africa who didn’t go through apartheid. Her generation didn’t experience it. They didn’t feel it. They knew little of it. That’s why she feels indifferent about the protest.

Her generation grew up during two decades of rapid economic growth. Many are more concerned with their own future that the country’s future. Young folks want a good job, and a comfortable life. “So compared to our predecessors, I think we are more materialistic and realistic,” she says. “They were more idealistic.”

Wang says it’s hard to say what impact the Tiananmen Square protests had on present day China. She says it’s more like an open and unhealed wound in China’s history. She says it’s different from other student protests, like the May 4 movement in 1919. “With Tiananmen Square, you can hardly see any trace of it nowadays,” she says. “It didn’t really achieve anything in the end, from my own perspective.”