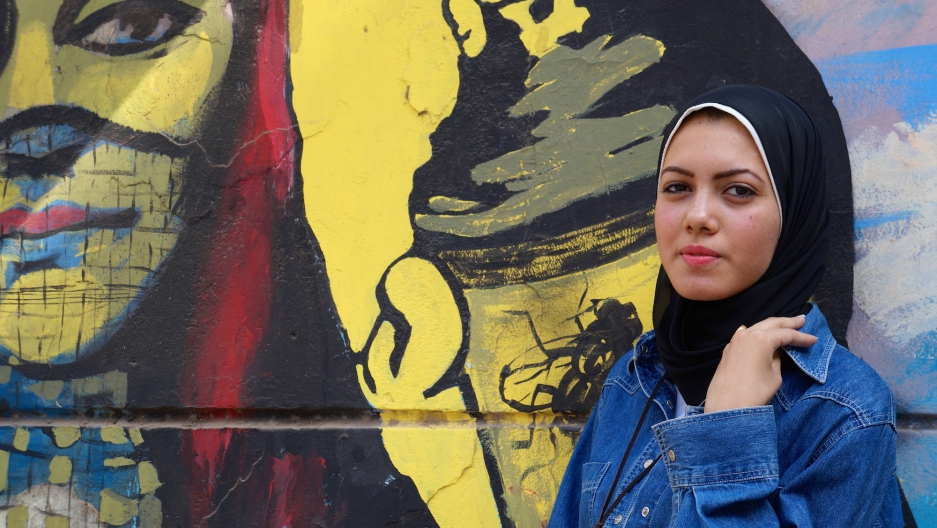 Mayam Mahmoud says she wants women to know that "no job of activity is out of the question."
Credit: Reem Abdellatif
Share

When the nineteen-year-old took to the stage of “Arabs Got Talent” last October, her performance left a lasting impression on young people in Egypt and the Arab world. It also earned her a death threat.

As Egypt’s first veiled hip hop artist, Mahmoud aims to battle sexual harassment with music, as well as to challenge Middle Eastern expectations of how women should act or dress.

“I want people to know that women — particularly veiled women, can do anything they want. No job or activity is out of the question,” she told GlobalPost.

The slender, part-time model and political science student grew up in Embaba, one of Egypt’s poorest working-class districts in Cairo. The tremendous effect of her audition for “Arabs Got Talent” last year, despite not qualifying as a finalist, has much to do with the way her feminist rhymes resonate with other Egyptian women, and in particular, their painful memories of sexual abuse.

Sexual harassment has become an epidemic in the Arab world’s most populous country, but it’s also a taboo rarely discussed in local media. Many women are chastised in Egypt's ultra-conservative society for discussing the violence in public. Mahmoud said this is precisely why she’s made abuse her main focus.

“I'm not going to be the one hiding her embarrassment,” she raps in one of her songs. “You cat-call and harass, thinking this is right. Even if these are just words, this is not how you treat [women], you’re throwing stones.”

She describes how Egyptian women often feel self-conscious for simply being out in public because sexual harassment can be found at every corner. Though women played a central role in both the uprising against strongman Hosni Mubarak in 2011, and the military-backed movement that removed Islamist leader Mohammed Morsi last year, hopes that the Arab Spring would empower women have been dispelled.

In fact, Egypt is considered the worst country in the Arab world to be a woman, according to a survey by the Thomson Reuters Foundation. The report cited political instability and the rise of Islamist groups among the reasons for the repression.

Levels of sexual abuse in the country have reached new highs, according to the United Nations, which reported in 2013 that 99.3 percent of women in Egypt have experienced sexual harassment at some point in their lives.

“Girls are constantly paranoid when walking to the store or school,” Mahmoud said with frustration. “Harassment has become so widespread, some women rarely leave their homes.”

Victim-blaming is pervasive. “I see male rappers in Egypt writing songs to blame women for the sexual harassment inflicted upon them,” she said. “They say we deserve to be harassed because of the clothes or makeup that we wear.”

Mahmoud said she’s had it with the “double standards.”

“Girls are told what to do from day one — ‘dress conservatively, don’t be loud’,” she said. “I used the teachings I heard while growing up to write lyrics that show the previous generations in Egypt how they contributed to confining their daughters in boxes.”

Mahmoud’s hard-hitting lyrics are vexing Egypt’s ultra-conservative Islamists, who believe a woman shouldn’t be in the spotlight, especially if she wears the Islamic veil.

Mahmoud, in fact, faces discrimination because she’s veiled. Some critics go as far as calling her an “infidel” who is giving Egypt and Islam a bad name for openly discussing sexual harassment.

“One extremist man on Facebook threatened that he would find and kill me after my audition for ‘Arabs Got Talent,’ because I was a disgrace,” she said.

But the tenacious teen hasn’t been the least bit fazed.

In March, Mahmoud was recognized at London’s Index Freedom of Expression awards for her work promoting women’s rights in Egypt. She’s also continuing her work as a freelance fashion model.

Mahmoud and her friends also set up a Facebook page called “Carnival of Freedom,” in which women can share posts of themselves participating in normal activities that might otherwise be considered taboo in Egypt’s ultra-conservative society, such as playing competitive sports.

“We’re hitting the streets to do everything we want,” the page’s description read in Arabic. “Not everyone has to like what we do. Whether they call it disobedience or a sin; it doesn’t matter.”

In Egypt and the Middle East, rap is hardly popular. While some of the younger generations listen to American hip-hop artists like Jay-Z or even Nas, very few local rappers exist in the region.

Considered among Arab nations as the “Hollywood” of the Middle East, Egypt is home to an underground hip-hop community, and Mahmoud is one of the few women leading the movement.

Although Mahmoud was raised in a patriarchal society, she said her parents encouraged her from a young age to express herself, read Arabic poetry, and dream big. She said she got into hip-hop because it gives her room to freestyle and express herself. She raps in Arabic so she can capture the attention of young Egyptians, who have been looking for new, edgy art that they can relate to, particularly after the youth-led uprising that toppled Mubarak in 2011.

“My lyrics are derived from the actual experiences of women,” she said. “They tell me their stories and I relay that pain through rap.”

Mahmoud believes that the only way anything will change for women in the Arab world is if more women challenge cultural stigmas by being vocal about sexual harassment and abuse.

“Egyptian women experience sexual abuse on a daily basis,” she said. “It’s our story to tell, nobody else can tell it because it’s our pain.”