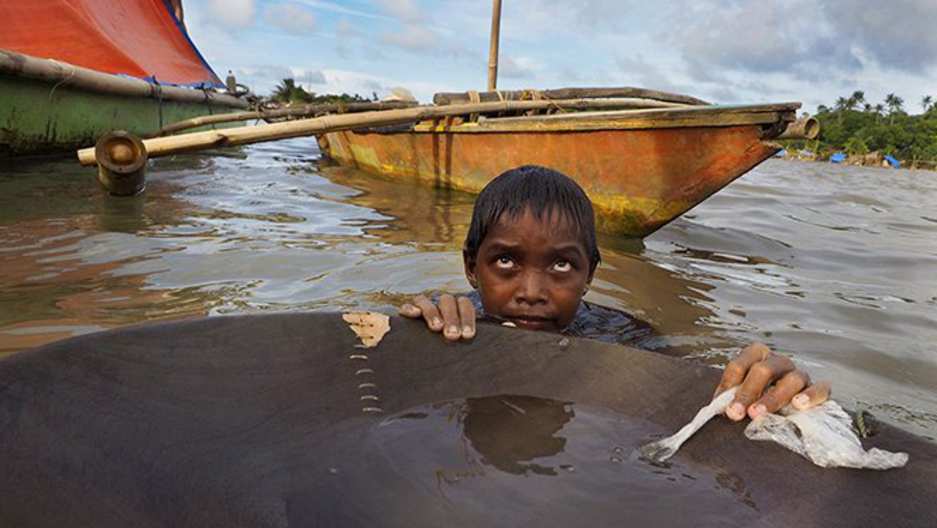 Jonathon Ramorez, 12, uses a wide wooden pan to separate gold from sediment in the Philippines’ Mambulao Bay. A plastic bag holds a small lump of mercury and gold.

Undersea mining is one of the last frontiers for extracting precious metals from the Earth. Mining companies see the ocean floor as a potentially vast new source of riches.

But in the Philippines, underwater mining is done on a more individual and dangerous scale, with children as young as 5 working in a particularly dangerous form of shallow water gold mining — called compressor mining.

Richard Paddock, who wrote about the technique as a contributing editor at the Center for Investigative Reporting, says compression mining is an unregulated, hazardous practice that places entire families, desperate to make a living, in grave danger.

“In order to find gold that is underground,” Paddock explains, “miners will dig a hole into a rice paddy or into the bottom of a waterway, such as a shallow bay. They’ll dig a hole straight down and start passing up buckets of mud to a partner above.”

At the surface, the tunnel opening is small — barely large enough to fit a person. Once inside, Paddock says, the divers dig down as much as 40 to 60 feet. They can’t see a thing — it’s just muddy water.

“When they get to a layer of soil where they believe there’s gold in the sediment,” Paddock says, “they’ll start digging sideways. Meanwhile, a partner up on top is hauling up bucket after bucket of this soil, and dumping it out for others to work with and extract the gold."

The technique is called compression mining, because to stay underwater for up to three or four hours at a time, the divers breathe through a tube that is connected to a small compressor, often made from a beer keg. The compressor is powered by a small diesel motor.

If flecks of gold are found in the soil, the workers up above move on to processing it, Paddock says. They begin by mixing the gold with mercury.

“Gold binds to mercury,” Paddock explains. “[They] process it a number of times until they’ve got as much gold and mercury together as they can. Then they will squeeze that out — it’s still sort of a liquid form — and try to solidify it into a lump that’s sometimes known as an amalgam.”

Next, the workers burn the lump, using a blowtorch. During this process, the mercury is vaporized, leaving just the gold. Burning mercury is one of the biggest dangers in this form of mining. Mercury is highly toxic and exposure is known to cause tremors, memory loss and brain damage, among other symptoms. It is especially hard on young, developing children — often the age group most likely to be working with it.

“You can’t reverse mercury poisoning,” said Richard Gutierrez, executive director of Ban Toxics, an environmental group seeking to end mercury use in the Philippines. “Brain cells are destroyed and can’t be replaced. You can’t reverse the nerve damage.”

There are a number of other hazards, Paddock says. “The one miners fear most is the collapse of the soil while they’re in the hole,” Paddock says. “Other dangers include bacteria in the water, including leptospirosis or various parasites. ... Sometimes the compressor hose itself has pollutants — oil or carbon dioxide — and that, in some cases, can be fatal.”

Compressor mining was banned in the Philippines by a 2012 executive order, as a result of an accident in the town of Paracale that left three miners dead. Still, with few or no other jobs available, compression mining continues. Miners say they pay local police $11 a month to look the other way.

“A lot of these are family operations,” Paddock explains, “An extended family might find that their best way of making a living is to work in a rice paddy, for example, and the whole family participates. The divers make more, so for boys and young men, this can be an appealing way to make a living.”

This “living” is not great, Paddock hastens to add. “They might make $5 a day, or perhaps even more than $20 on a great day, but there are a lot of days when they make nothing. These people are fairly desperate to find some way to earn money and they subject themselves to great risk in doing so.”

Paddock says he spoke with one 16-year-old boy who was burning mercury. He had started when he was eight years old. “He said that no one had told him before that mercury vapors were hazardous,” says Paddock, “and he was a little reluctant to believe me when I outlined some of the dangers. The more pressing problem for them is how they’re going to buy food, how they’re going to eat. They’re not really thinking in a very long term way.”

According to Thomson Reuters, in 2012, the Philippines was the 18th largest producer of gold worldwide. Much of the gold from the Philippines is sold to brokers and eventually ends up in China.