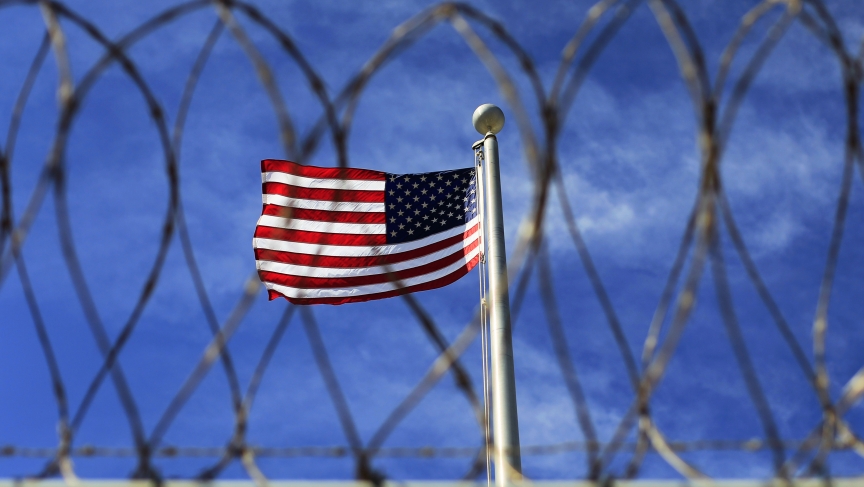 The US flag flies over a prison used to house detainees at the US Naval Base at Guantanamo Bay. The facility now holds about 150 prisoners who have been captured in Afghanistan and elsewhere since the September 11, 2001 attacks.

After five years as a hostage of the Taliban in Afghanistan and Pakistan, Army Sgt. Bowe Bergdahl is a free man.

His release was part of a rare prisoner exchange deal brokered by the US government. Five prisoners associated with the Taliban were released from the Guantanamo Bay prison in exchange for Bergdahl's freedom.

Since the release, the Obama Administration has taken heat for negotiating with the Taliban in the first place and for releasing men who could pose a threat to American security.

However, the release reduces the number of detainees at Guantanamo to 149, which Pardiss Kebriaei, a lawyer with the Center for Constitutional Rights, said is in line with President Obama’s promise in his 2014 State of the Union address to close the detention center.

“This concept of holding people forever, on a remote island prison, in perpetuity, raises the question, 'What are we doing, and how can that be sustainable?'” she said.

Kebriaei currently represents two Guantanamo detainees. One client, Galib al-Bihani, is a Yemeni man in his mid-30s, who has been held at Gitmo since 2002. Until this year, he's been held in indefinite detention, meaning that while there wasn’t enough evidence to charge him with a crime, he had been deemed too dangerous to release.

The government said al-Bihani was a cook for a group associated with the Taliban in Afghanistan prior to the 9/11 attacks. Last month, al-Bihani was cleared by a review board, which means he joins 78 of the other 149 detainees who have been approved for transfer out of the prison.

Kebriaei, who has been travelling to Guantanamo every month for the past six months as part of her client’s review process, says the clearance is a positive step, but it doesn’t equal freedom.

Her other client was cleared almost five years ago, but he remains at Guantanamo.

While it’s a common belief that detainees are not being transferred because there are no countries that will take them, Kebriaei says that’s not entirely true.

“It’s not that [the countries] were unwilling, it’s that they weren’t asked,” she said. Gitmo had become invisible, she said, until a mass hunger strike at the prison last year brought it back into the public eye.

Dozens of countries took detainees in 2009 and 2010, and special US envoys are now restarting talks with foreign governments about further relocations.

Kebriaei herself has seen some of her clients successfully repatriated, including one man who went back to his home country of Yemen. More than half of the remaining detainees are from Yemen. Fifty eight have been approved for transfer.

Two of her other clients, a Syrian father and son, were resettled in Cape Verde and Portugal, respectively.

“They are among the success stories that we don't hear about,” Kebriaei said. “The claims about recidivism and threats about transferring detainees are much louder than the stories of the hundreds who have been resettled and repatriated without incident, and who are rebuilding their lives.”