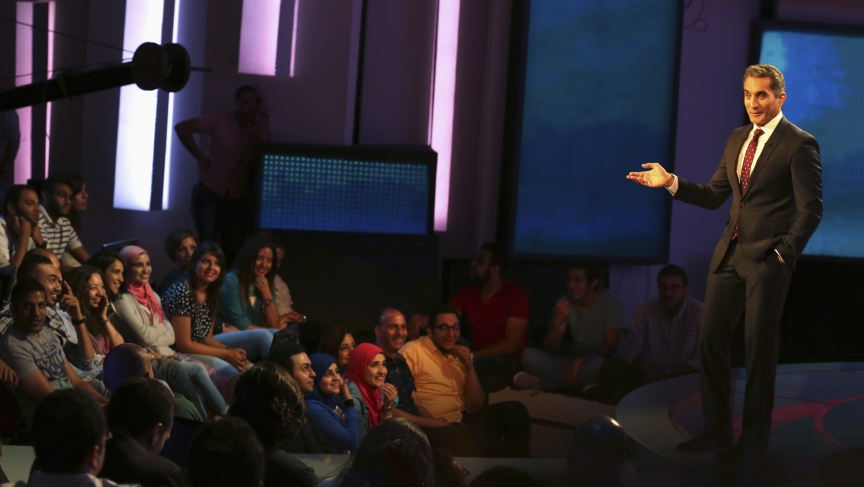 Egypt's TV satirist, Bassem Youssef, said his show had been cancelled amid speculation his latest script poked fun at a presidential election won by Abdel Fattah el-Sisi. Bassem Youssef is often referred to as the "Egyptian Jon Stewart."

Bassem Youssef was an "an equal opportunity ridiculer.”

So says David Kirkpatrick of the New York Times, who wrote recently about Youssef's decision to go off the air.

"He made fun of then-President Hosni Mubarak, of the military, of the Muslim Brotherhood, of the activists in the street, the liberals in Tahir Square — basically everybody," he adds.

Kirkpatrick says the climate started to change for the heart surgeon-turned-comedian after the 2013 military takeover. “Things got to be almost Orwellian in that if you so much as said, 'this military takeover might possibly be a coup,' you were denounced as a traitor, probably a terrorist, and at the same time, an agent of Israel and the United States of America."

Still, says Kirkpatrick, Youssef continued to poke fun until the election of former military leader Abdel-Fattah el-Sisi as president. That's when General Sisi said "in his first interview that he would endure the criticism, but if it's offensive, he would enforce the law."  The law he's speaking of bars insulting the president, says Kirkpatrick, the Times' Cairo bureau chief.

Youssef's show, during its run, became popular among Egypt's educated elite.  Kirkpatrirck says one of his favorite skits wasn't actually funny, but rather serious and memorable.

Youssef started "poking fun at some ultra-conservatists TV preachers who were backing Morsi (for president). After showing some clips of these guys saying things that seem crazy, just like Jon Stewart might do with Pat Robertson or some sanctimonious American religious figure, Bassem Youssef turned to the camera and said, 'Ok. I see how this works. You say that we’re not good Muslims. But if that's the case, we've got a message for you. We don't consider you scholars or authorities.'"

"And that was really striking. You don't hear that kind of vigorous public debate over what Islam SHOULD mean for society in Egypt very often. And I really felt that was an important moment. And all of that is over now," Kirkpatrick adds.