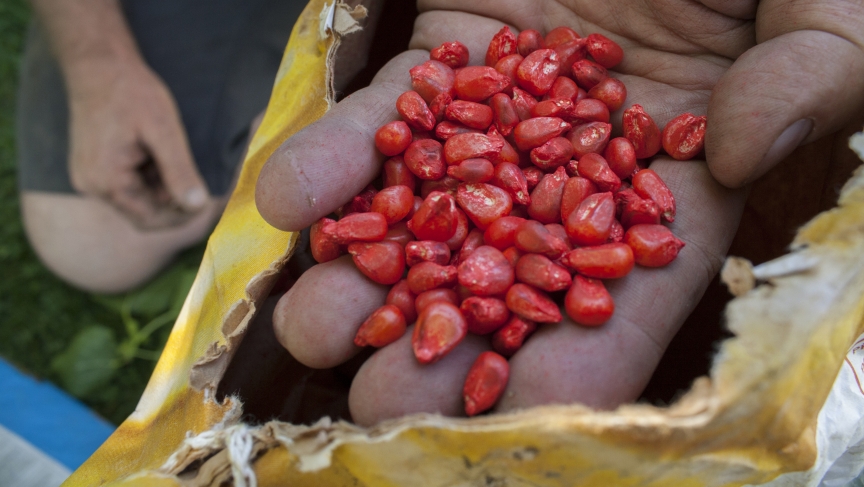 Monsanto corn seeds, Mon 810, are grown in only five countries in the European Union. France, Germany and Italy are among those that have banned GMOs completely.

Neatly ploughed, furrowed fields sit at the base of the Italian Alps. This fertile plain, called Magredi, is part nature reserve, part farm country and, lately, part pain-in-the-neck for the Italian government.

Thanks to one feisty farmer.

“This stuff, with the same light, water and fertilizer, produces 10 times more than the other kind,” says farmer Giorgio Fidenato. “So, what more could you want?!”

The blonde and brawny farmer is a kind of crusader for GMO corn. Trudging along in his tractor, he may look like any other farmer in the region, except that he’s the only one spreading smuggled, Monsanto GMO corn seeds. Fidenato dreams of a country where every cow and every child is raised on GMOs.

He might serve it up to his family. But rather, what he’s thinking, is there’s money in cattle feed. Forty percent of the corn that Italian farmers feed to their animals is imported, because Italy doesn’t produce enough. When regular corn isn’t available, feed factories quietly import GMO corn. But growing it on Italian soil is a criminal act.

Italians gush over their food. They like to believe that made-in-Italy products like pasta, prosciutto, mozzarella and parmaggiano are GMO-free from the field to the plate. That reputation, at least for the government, is a matter of national interest, because those foods sell handsomely abroad.

So Fidenato’s pro-GMO campaign was never welcome. Opponents tried to stop him from the beginning.

In fall of 2010, activists tried. This archive video shows them invading Fidenato’s fields right before harvest time. Wearing decontamination suits, they clipped his stalks and covered up his crop. Leading them was Greenpeace activist Federica Ferrario. She says they intervened to stop the pollen from contaminating nearby farms.

Then the state had its turn, when officials twice took Fidenato to court. He fought fiercely until the European Union took his side, overruling Italian judges. As it turns out, Fidenato’s corn of choice, Monsanto 810, is approved by the Europe Union.

The legal sparring match continued when Italy declared all GMOs illegal, and a threat to the environment. It was one of those rare moments where the establishment sided with the activists.

Fidenato’s reaction was to buck both the Italian government and environmental activists. This spring he sowed GMO corn again.

“I’m not just being 'Mary, Mary quite contrary,' you know, but, when Italy, its politicians and its justice system distort Italian law, I’m going to say no,” Fidenato says.  “I carry on with my battle, and I keep sowing GMO corn as EU law allows."

Fidenato may be the only one making noise, but he isn’t alone in his campaign for genetically modified seeds. Many of his fellow farmers would also like to grow GMOs for animal feed, but are too scared of the legal backlash. The Italian government might be slow and bureaucratic for most things, but when it comes to food, it gets cutthroat.

At a busy market in central Rome, butcher Alessandro Iegri slices veal and pork inside his spotless stand. He says Fidenato wouldn’t find any sympathy there.

“It’s going to be quite a battle for him because the Made-in-Italy label is very important,” Iegri says. “These days you must work with natural products.

His stand is stocked with chicken labeled, NO GMO. He says people here seek out that label, and are very informed.

Older buyers like Anna Nossa, prefer to keep their food and science separate.

“I’d rather be on the safe side, even if it means buying less, but at least I know it’s safe,” Nossa says.

Come July, Italy will lead the European Council. That means that for six months Italy will set the agenda. The minister of agriculture has already announced that GMOs will be a priority. The plan is to dismantle Fidenato's line of defense by changing European law, so that individual countries can ban GMOs if they want. So far, the brawny farmer has won a few battles, but the war continues.