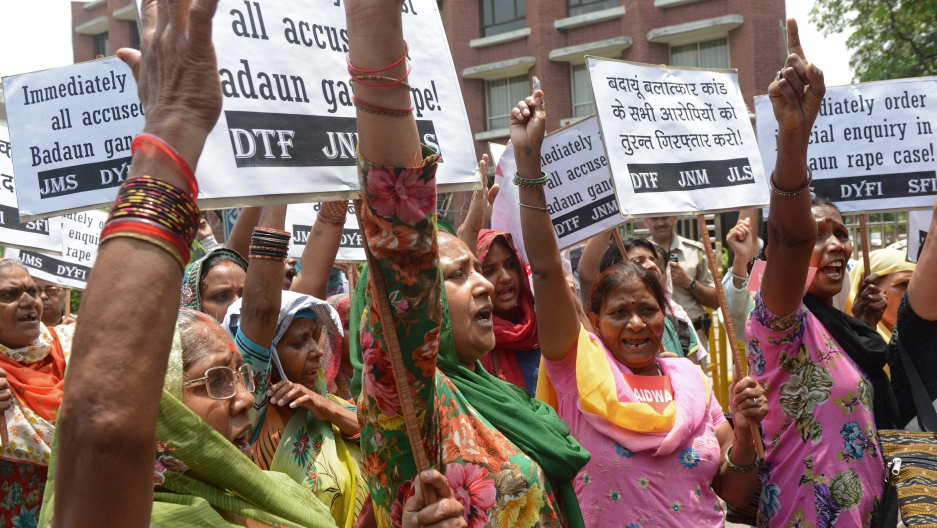 Activists from The All India Democratic Women's Association (AIDWA) and Indian Students Union shout slogans in front of Uttar Pradesh Bhawan in New Delhi on May 31, 2014, against the gang-rape and death of two teenage girl.
Credit: Raveendran
Share

A Pakistani man stoned a woman to death when she would not agree to an arranged marriage. A Chinese man beat his 11-year-old daughter to death for copying her peer's homework. A 17-year-old Italian man stabbed and burned to death his 16-year-old girlfriend for objecting to his sexual demands.

Father to daughter, husband to wife, boyfriend to girlfriend. These stories of violence fill our news sites every day. And while the shooting at UC Santa Barbara sparked the #YesAllWomen trend mostly among an American audience, the call is resonating with women all over the world.

Here are just some examples:

Every week, domestic violence kills one Australian woman and an average of 74 domestic assaults take place per day.

#YesAllWomen because a woman is murdered every week in Australia from domestic violence. Violence degrades us all.

In the Indian village of Uttar Pradesh, two girls — aged 14 and 16 — were hung from a mango tree after being gang raped and strangled.

Just saw the pics of two girls hanged after rape in UP. I am disturbed. Cant share the picture. Ashamed to be an Indian. #YesAllWomen

In Moroccan, a teen committed suicide after her family forced her to marry her rapist.

#YesAllWomen Because in Morocco, women & girls are forced to marry their rapists: http://t.co/HtNHcXCfjj

Quebec's Moussa Sidimé was sentenced to 60 days in jail for slapping his daughter to death in 2010.

because 60 days for slapping your 13 year old daughter to death in Quebec. #yesallwomen

France is one of 13 countries where 20 to 29 percent of women reported being the victims physical or sexual violence.

#yesallwomen bc in #France only 16% of all violence against women is reported, and many still talk abt "false allegations" being the norm

Indian police found that in New Delhi, a woman is raped every 18 hours and every 14 hours, molested.

A woman is raped every 18hrs in Delhi, #India #YesAllWomen

In Japanese: "People say women don't feel a sense of danger, but when they do and actually act with caution, people get mad that they are too self-conscious and that they shouldn't auotmatically treat men as perpetrators. #YesAllWomen"

These statistics were found on a rape crisis website for England and Wales.

Around 85,000 women are raped on average in England and Wales every year and only 1 in every 100 lead to a conviction. #YesAllWomen

Pregnant for 3 months at the time of her death in Pakistan, Farzana Parveen, was killed by her father for marrying without his consent.

#YesAllWomen because today Farzana, 25, was beaten to death by her family for marrying a man without their consent. http://t.co/UVsF5PBskr

The European Union's recent report on women's violence found that one in 10 women have experienced sexual violence since the age of 15.

I can go backpacking through Europe but my parents are afraid to let my sister go alone. #YesAllWomen