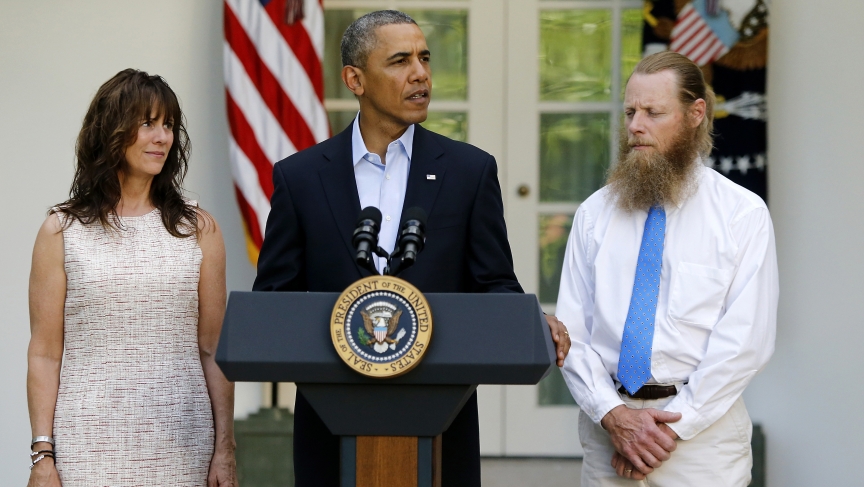 President Barack Obama stands with Bob Bergdahl (R) and Jami Bergdahl (L) as he delivers a statement about the release of their son, prisoner of war US Army Sergeant Bowe Bergdahl, in the Rose Garden at the White House in Washington May 31, 2014.

The Taliban is celebrating a "great victory," while the Obama administration is on the defense over its decision to accept a prisoner exchange deal with the Taliban that released US Army Sergeant Bowe Bergdahl.

A video released by the Taliban apparently shows supporters celebrating and welcoming five members of the group as they landed in Qatar on Monday. The men were transferred from Guantanamo Bay prison, where they had been held for at least a decade.

Members of the Taliban captured US Army Sargent Bowe Bergdahl five years ago and the deal to release him in exchange for the Taliban prisoners was brokered with the help of Qatari government. US officials insist they did not negotiate directly with the Taliban.

Sergeant Bergdahl has been in a US military hospital in Germany since his weekend release, receiving treatment.

Those released in exchange for Bergdahl were high-ranking members of the Taliban, according to the BBC's Inayatullah Yasin, who has reported extensively on the Taliban.

One — Mohammad Fazl — was the Taliban's deputy defense minister in 2001. Another is Khirullah Khairkhwa — who was a senior official believed to have had direct links to Osama bin Laden.

Then there's Abdul Haq Wasiq, who was the group's deputy minister of intelligence. Mullah Norullah Noori was a senior military commander and a governor. And Mohammad Nabi Omari held multiple leadership roles and is alleged to have been involved in attacks against US and coalition forces.

Yasin says their release could well have an impact on the security situation in Afghanistan. "These people have influence on foot soldiers. When they say something, definitely it will be obeyed by those fighting in Afghanistan."

The US says that Qatar has provided assurances that the men will be carefully watched and held in Qatar for a year. It's unclear what happens after that.

"If they stay in Qatar for one year and they opt for peaceful means," says Yasin, "then it will be good for Afghanistan. But if they opt for military options, then that won't look good."

While in Qatar, Yasin says it's difficult to know if they will pose a threat. "If they are allowed to have access to electronic communications, that will make it easier for them to revive their previous connections," he says. The Taliban get their "ideas" and "commands," says Yasin, from their leader, Mullah Omar, through various electronic means. Some Taliban prisoners who have been released earlier have returned to Afghanistan to fight.

Republicans in Congress and some military officials have criticized the prisoner exchange, saying it could jeopardize US and global security. Members of the Obama administration say the Qatari government has given assurances that it will put in place measures to protect US national security, but those measures were not made public.