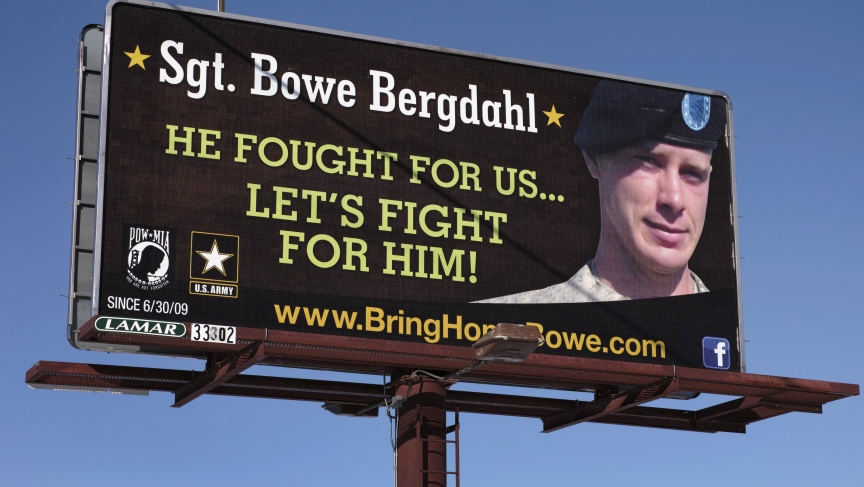 A billboard calling for the release of US Army Sergeant Bowe Bergdahl, held for nearly five years by the Taliban after being captured in Afghanistan, is shown in this picture taken near Spokane, Washington on February 25, 2014. Bergdahl has been released and is now in US custody.

As part of an unprecented trade of prisoners this weekend, the Taliban released US Army Sgt. Bowe Bergdahl in exchange for five Taliban leaders held at Guantanamo Bay. Bergdahl had been a Taliban captive for five years before his release.

28-year-old Bergdahl is recovering at an American hospital in Germany, where he is reportedly in stable condition. His father, Robert Bergdahl, acknowledges that his son's recovery will take a long time.

In an interview with the New York Times, the elder Bergdahl likened his son to a deep-sea diver. "If he comes up too fast," he said, "it could kill him."

One person who knows intimately what it's like to be a prisoner of the Taliban is David Rohde.

The New York Times reporter was in Afghanistan in 2008 researching a book when he, his translator and his driver were kidnapped by the the Taliban. His captors were from the Haqqani network.

It was the same Taliban group, in fact, that took Bergdahl prisoner.

Rohde and his fellow captives were transported to a Haqqani safe haven in northern Pakistan, where they were held in isolated homes with mud walls around them. The only people they interacted with were the young Taliban fighters who served as their guards.

"I really came to loath the commanders, who were clearly manipulating these young men, lying to them to get them to be part of the fight," Rohde says of his captors.

Initially, he was constantly afraid that he would be killed. Eventually, he says, it became clear that he was more valuable alive than dead, to be traded, and he was forced to settle into the daily routine of being a prisoner, with no knowledge of the rescue efforts being made on his behalf.

Rohde says that while his ordeal was terrible, he cannot imagine what Bergdahl went through in his five years of captivity.

"He spent roughly 10 times the amount of time in captivity than I did," Rohde says. "It's unprecented what he's gone through."

There are other Americans still being held as prisoners in war zones, including USAID contractor Warren Weinstein, who was kidnapped by al-Qaeda in 2011. There are two American journalists missing in Syria. Some are wondering if the swap that freed Bergdahl will set a new precedent of the US government negotiating with kidnappers.

In the past, the US and Britian have generally refused to pay ransoms or release prisoners. Other Western countries do make exchanges, including Israel's 2011 deal with Hamas to release one Israeli soldier, Gilad Shalit, in exchange for 1,027 Palestinian prisoners.

After nearly eight months in captivity, Rohde and his translator managed to escape by climbing over the 10-foot wall of their compound. "I was elated," he says of his homecoming, even though he acknowledged that getting back into a daily routine was difficult.

Bergdahl's reception by the American public might prove to be a bit more complicated than Rohde's. In emails to his family before his capture, Bergdahl had said he was feeling disillusioned with the Army and sympathized with the Afghan people caught in the crossfire of the war.

He's now being called a deserter and a traitor. But Rohde says he hopes the public and the media can suspend their judgment of the newly-freed soldier.

"I think it's important to be fair to him. ... If he did desert, if he did make a mistake, I think that he paid a terrible price for five years," Rohde says. "We should give him a chance to recover and then tell his story before people start condemning him."