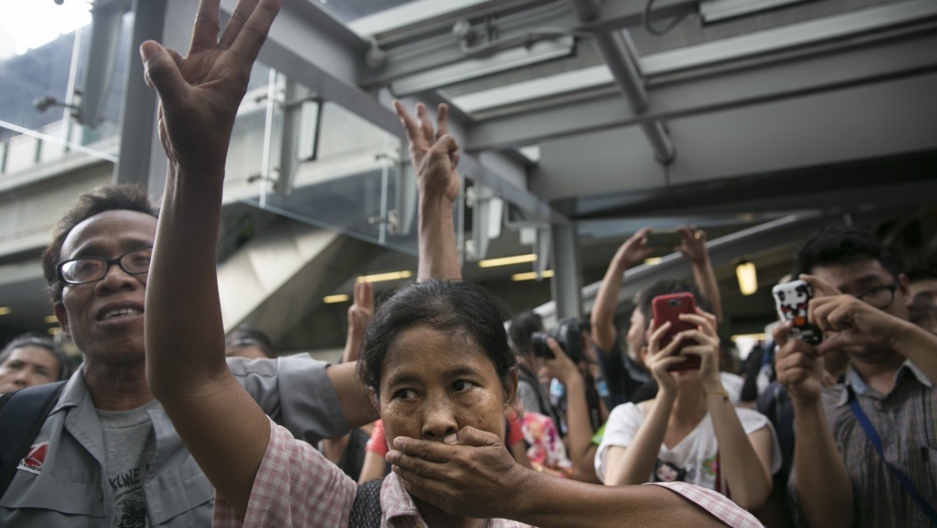 Thai protesters flash the 'Hunger Games' salute at a demonstration before military police shut them down outside a shopping mall on June 1, 2014 in Bangkok, Thailand.
Credit: Paula Bronstein
Share

BANGKOK, Thailand — They materialize suddenly, by the dozens, raising a three-finger salute toward the sky. Then they vanish as quickly as they appear, melting into crowds to evade scores of armed troops and police.

They are Bangkok’s anti-coup flash mobs. Under Thailand’s new military junta, which seized power from an elected government in late May, protesting the armed takeover is a crime.

Those daring enough to defy the coup have been reduced to cat-and-mouse games — swift public demonstrations designed to evaporate before police or soldiers can haul off offenders.

The flash mobs’ three-finger salute is inspired by The Hunger Games, the popular science-fiction series depicting a futuristic totalitarian regime. In The Hunger Games series, dissent toward a cruel dictatorship is signaled by raising three fingers; in Bangkok, the salute draws an unflattering comparison to the real-life junta that just seized power.

As in the Hunger Games, flashing the signal carries risks. Cops and soldiers, which are now heavily deployed throughout the Thai capital, dispersed small crowds raising the salute around a downtown shopping mall on Sunday.

The salute emerged after anti-coup protesters were previously nabbed for nothing more than raising sheets of paper printed up with anti-coup slogans.

Adopting the salute as a resistance symbol has tactical perks. Making paper signs creates evidence. Making hand signs does not. The three-finger gesture carries significance beyond the world of fiction. It is also said to represent the French revolutionary slogan, “Liberty, Equality, Fraternity.”

But these flash mob protests should not be mistaken for a large-scale, organized backlash to the coup.

The military junta — which has staged Thailand’s 12th successful coup since full-on monarchy rule ended in the 1930s — now has near-unlimited powers to lock up its critics.

Deposed politicians, professors, activists and journalists have been “invited” into army camps. They emerge days later only after signing documents promising they will refrain from condemning military rule. Denouncing the junta in public is likewise risky. Several Thais who’ve gathered to shout down the coup have been yanked by the arm into government vehicles.

People salute in opposition to Thailand's coup on June 1, 2014 in Bangkok, Thailand.

So far, anti-coup gatherings have been disorganized, scattered and small. Nationalists cheering on the army cite this as proof the putsch is widely popular; those who oppose the coup contend the public is dismayed but cowed into silence.

The junta has temporarily seized TV stations, shut down opposition radio networks and ominously warned the media against publishing critical statements. Even meek gestures of dissent invite repercussions: a woman flashing the three-finger salute, according to a Bangkok Post video report, was pulled screaming into a taxi by “suspected plainclothes police officers.”

Unlike previous coups, this putsch took place despite a sizable anti-coup movement’s vows to rise up and confront any future military takeover. That counter-coup force is known as the Red Shirts, a faction allied to the deposed government. It members, largely hailing from the working classes and less-affluent upcountry, first galvanized to fight for electoral rule following the last coup in 2006.

But the Red Shirts’ senior leadership has been mostly silent following detention and release from army camps.

One particularly feisty leader, nicknamed “Rambo,” had promised to “lay down his life” to defend elected government with pro-democracy squads trained in martial arts. Upon release from detention, he was suddenly docile and agreeing to quit politics for life. The movement’s more defiant members have simply fled.

The upshot is that, for now, the movement with the best chance of defying the military appears neutralized — and the ongoing anti-coup protests are haphazard and operating under fear.

In the West and beyond, Thailand’s foreign allies have roundly condemned the coup. Human Rights Watch warns the military is “showing dangerous signs of creating a dictatorship.” US Secretary of State John Kerry said there is “no justification for this military coup” and that “the path forward for Thailand must include early elections that reflect the will of the people.”

But the military has justified its coup by insisting Thailand’s elected government had grown too dysfunctional to carry on. A senior army leader, Lt. Gen. Chatchalerm Chalermsukh, claimed the coup was hatched to “prevent Thailand from becoming a failed state.”

But that dysfunction was largely the work of a self-proclaimed “people’s coup” street protest faction that sabotaged elections and chased the elected party out of its offices — all the while goading the army to back its crusade.

This pro-establishment faction’s demand to replace the elected government with an unelected supreme council is now being fulfilled by the army top brass.

The next election day, according to the junta, won’t come for at least 15 months. But some anti-coup dissidents promise they’ll risk arrest and continue popping up around Bangkok until that day arrives.