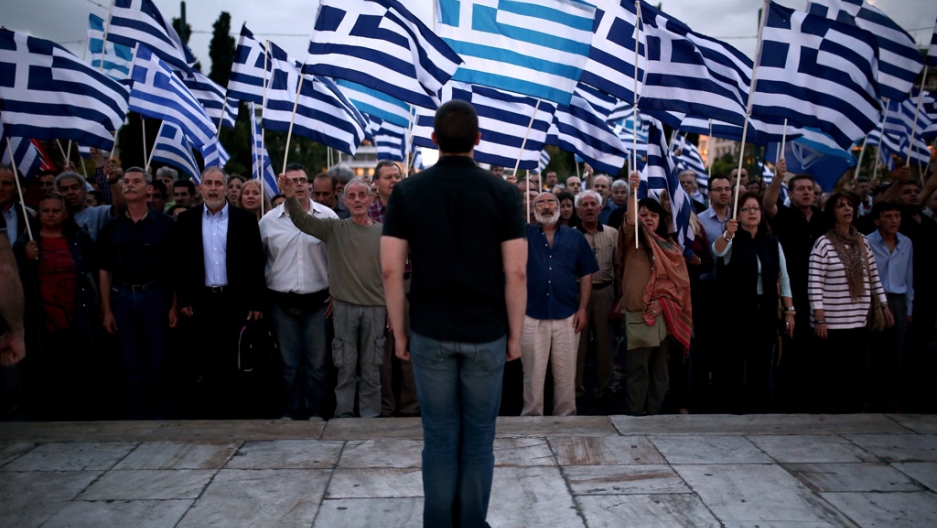 Greece's far-right Golden Dawn party is all riled up.
Credit: Angelos Tzortzinis
Share
NEW YORK — Reading European headlines this past week, one might be forgiven for thinking that Mussolini was alive and well in Rome and Germany’s Reichstag was about to be set fire again.

But hang on: The strong right-wing showing in last weekend’s European Parliament vote hardly represents an immediate threat to democracy. With most decision-making power in the 28-state European Union still firmly in the hands of national governments, the real impact on policy will be less dramatic than the headlines suggest.

The EU is not collapsing. Scrapping the euro or deporting all the immigrants — ideas that the rightist parties are championing — are not likely to occur any time soon.

Still, no leader can afford to ignore this rising populism — not even Barack Obama.

Aspects of the United States’ relationship with the EU may be sacrificed to the populist gods. These include efforts to pass a new trans-Atlantic free trade accord, talks on coordinating sanctions against Russia, and preventing European powers from jumping the gun in reopening full trade with Iran.

The parliamentary elections did feature impressive gains for out-of-the-mainstream rightist parties espousing anti-immigrant, anti-gay and other extreme sentiments. The new, larger right-wing bloc will now occupy about a quarter of the 751-seat European Parliament, the supra-national legislature that meets in Strasbourg, France.

“Remarkable and regrettable” was the way German Chancellor Angela Merkel, a fervent supporter of the EU, described the rightist surge.

The reality is a bit more like EU politics itself: boring and byzantine. Pro-EU parties, the “traditional” social democratic center-left and conservative center-right groups that created the European super-state and its institutions, still won more than 75 percent of the seats.

While the newbies will have little real power to push their agenda in France, Germany or Britain — at least not until they start winning national elections, too — the otherwise toothless European Parliament does have the ability to force debate on foreign policy issues.

More from GlobalPost: Britain's far-right UKIP is so popular it gets poop in the mail

The EU-US free trade agreement, under active negotiation, is perhaps the most controversial of them. Meant to complement a trans-Pacific pact the US is also working on, this trans-Atlantic deal would put new limitations on the amount of government subsidies that can flow into private industries, reduce barriers for trade and open government contracting to bids from member countries.

Not surprisingly, those ideas run contrary to populist sentiment, and not just on the right. The European left opposes US efforts to pry open Europe’s market to genetically modified (GM) foods, for instance.

The EU will "not be changing our food safety laws as a result of this agreement,” Karel De Gucht, the European trade commissioner, insisted after the most recent round of talks on May 23. “That goes for genetically modified food and hormone-treated beef as much as other products. These issues are just not on the table.”

The practice in Europe of intervening in proposed mergers between multinational corporations to defend “national champions” is another sticking point. The US would like to end that except when national security is concerned.

But France, in particular, has scotched several high-profile takeover bids of French firms on economic grounds, fearing layoffs in the wake of the mergers. General Electric’s planned takeover of French engineering firm Alstom is currently the subject of such pressure.

Efforts to agree on common financial standards, too, could falter. Already the US has insisted on much higher capital requirements for its banks in the wake of the 2008 collapse of Lehman Brothers than Europe has contemplated. Populist parties are hardly friends of the European banking sector, but any sense that Washington is dictating the standards of practice will go down poorly.

Another place where US and European policy may diverge is over economic sanctions, both those punishing Russia’s annexation of Crimea and those seeking to restrain Iran’s nuclear programs.

The current talks on Iran have made incremental progress, leading to a lessening of some sanctions. But even as the main prohibitions on purchasing Iranian oil or investing in its energy sector remain in place, high-profile French and German trade delegations have visited Tehran to talk about “post-sanctions” business deals.

This trend could accelerate as the anti-Americanism of the new European Parliament is judged to be an accurate barometer of EU public opinion.

Russia will also pose a problem. Vladimir Putin is viewed by many of the leaders of these upstart parties as a champion of national rights. Marine Le Pen, whose right-wing National Front in France was among the biggest winners in last weekend’s vote, has described Putin as an admirable leader. She praises his “Christian values” and his patriotic stance in Crimea.

More from GlobalPost: Here's why you should be paying attention to France right now

Greece's Golden Dawn and Hungary's Jobbik party, each with neo-Nazi elements, are gushing in their praise for Putin’s denunciation of homosexuals and his aggressive diplomacy. That’s in spite of the fact that Putin’s pretense for seizing Crimea earlier this year was that neo-Nazis had taken over Ukraine’s government in Kyiv.

Nigel Farage, whose upstart UK Independence Party won 25 percent of the British vote, named Putin as the European politician he most admires. Presumably, Winston Churchill, who graces most of his UKIP’s campaign posters, would also make the list somewhere.

For now, none of them wield the kind of power that Merkel, Francois Hollande and David Cameron do.

But all this complicates the political calculations about how much each leader can afford to be seen siding with America against Putin’s nationalism.

And if there is any man in Europe who can exploit that kind of problem, his name is Putin.