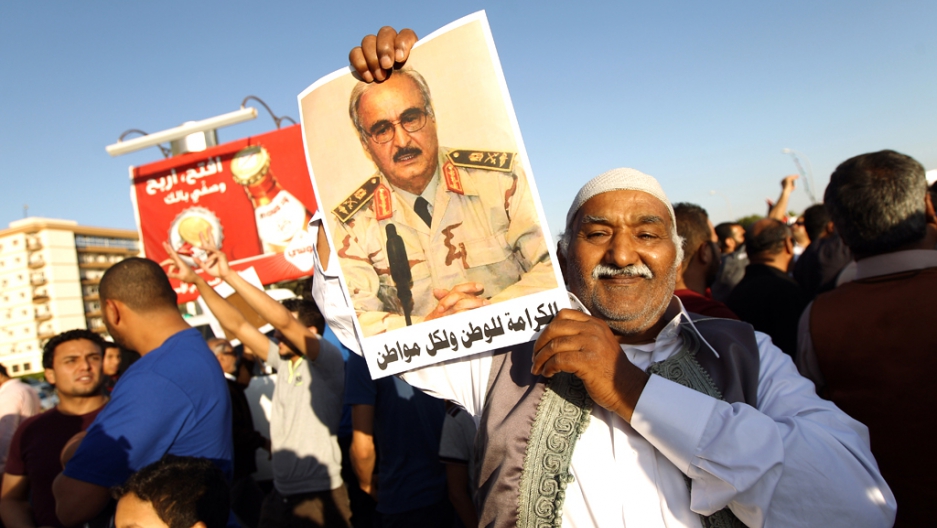 A Libyan carries a portrait of retired Gen. Khalifa Haftar during a rally in support of the rogue former general whose forces have launched a "dignity" campaign to crush jihadist militias on May 23, 2014 in Benghazi, eastern Libya.
Credit: ABDULLAH DOMA
Share

Libya, among the first few countries to experience the "Arab Spring," now shows signs of completely falling apart. And the man at the center of it all is retired Maj. Gen. Khalifa Haftar.

On May 19, the capital of Tripoli saw some of the worst violence since the civil war that led to the ouster of Libyan leader Muammar Gaddafi in 2011. Militias loyal to Haftar attacked the country's parliament and launched an assault on Islamist militants in Benghazi.

The attack didn't come without warning: On May 17, Haftar — in military dress — told Benghazi's civilians to leave before his forces launched an attack on the Islamist militants. He said, "We've started this battle and will continue it until we have reached our goals."

The Benghazi assault killed more than 70 people. The government in Tripoli accused Haftar of attempting a coup. That would make it his second attempt — his first, in February, consisted of announcing an "initiative" to suspend Libya's interim government. It was more or less ignored.

This time, however, the clashes were enough of a concern that the United States moved 250 Marines and aircraft to Sicily last week to ensure it could evacuate its citizens if necessary. "We're watching [the situation] very closely," Pentagon spokesman Rear Admiral John Kirby said at the time. "It's certainly unsettling."

Another 1,000 Marines were to be deployed on an amphibious assault ship off the Libyan coast this week for the same reason.

So, who is this guy?

Often referred to as a "renegade" or "rogue" former general, Haftar launched a campaign in the middle of May to drive out Islamists and "terrorists" from Libya. He also dismissed Libya's parliament, the General National Congress, and its prime minister as "illegitimate."

He branded his offensive against the Libyan government and Islamists "Operation Libyan Dignity." His effort has even generated a Twitter hashtag: #LibyaDignity.

Haftar's emergence in Libya came seemingly out of nowhere. A look at his past shows a pattern of shifting loyalties, as a BBC profile pointed out: "He initially fought for Muammar Gaddafi, then against him. He fought alongside Islamist rebel groups in the uprising that toppled Gaddafi in 2011 before becoming their nemesis this year."

Some have drawn comparisons to Egypt's former army chief and newly elected president Abdel Fattah al-Sisi. Like Sisi, Haftar has ties to a previous strongman, and opposes the Muslim Brotherhood and Islamist influence in politics. And like Sisi, he might be interested in running the country.

"I do not seek power," Haftar told a London-based Arab newspaper called Asharq al-Awsat, according to Financial Times. "However . . .  if the people want this through the ballot boxes, if the masses ask for me, I will not hesitate in responding to their request."

A Libyan carries a portrait of retired general Khalifa Haftar during a rally in support of his forces on May 23, 2014 in Benghazi, eastern Libya.

"He's tempted to do an al-Sisi situation, but he's not going to be accepted," Libya expert Omar Turbi told CNBC. "They lived with a dictator for 40 years. You think they're going to accept that again? Not going to happen."

In fact, most of the experts quoted by CNBC sounded surprised that Haftar was even on the scene. "Everyone laughed at him" after the failed coup attempt in February, said Frederic Wehrey, a senior associate for the Carnegie Endowment's Middle East branch. "He was a running joke."

Not everyone, however, thinks Haftar is incompetent.

"You need someone tough like Haftar to step up to the outlaws," independent analyst Abdel Hamid el-Jadi told FT. "He has experience in the Libyan military and he knows the tribes. If he has political ambitions we’ll deal with that in the second stage."

It should be noted that there are rumors Haftar had the backing of the Central Intelligence Agency in the 1980s, leading to a failed coup attempt against Gaddafi. He left the country — or was "spirited out" of North Africa by the CIA, as some accounts suggest — and spent the next 20 years living in Virginia, near the CIA's Langley headquarters, before returning to Libya in 2011.

Another Libyan carrying a picture of Haftar at a rally in support of his mission.

Earlier this week, Haftar dismissed the idea that current Libyan Prime Minister Ahmed Maiteeq — elected earlier in May — would be able to maintain stability.

"We are open to talk to anyone who can defend the nation," Haftar told Reuters. "[But] he is a businessman, not a man of war."

That might have something to do with Maiteeq gaining the Muslim Brotherhood's vote of confidence last week. Most of the militias aligned with Haftar are fiercely anti-Islamist.

On a related note, Maiteeq's legitimacy has been called into question by Libya's interim prime minister, Abudullah al-Thinni. Thinni resigned one month after he was elected, citing threats to his family's safety. Libya's parliament then elected Maiteeq, and although he was sworn in, the parliament's deputy speaker declared the vote that elected him invalid, because it took place during a walkout by secular lawmakers.

Anti-Islamists vs. Islamists: That's the clearest it's going to get

The site of a car explosion in Benghazi in January. At least 5 people were killed when armed groups clashed in Libya's capital.

Analysts view the latest developments in Libya as solidifying two camps: Islamists, and those like Haftar who oppose them.

"Haftar is trying to put together a loose coalition of forces, including the Zintanis and Jathran's federalists, to counter the power of the Islamist camp," Eurasia Group's Riccardo Fabiani told Reuters.

"For the first time, there are potentially two blocs, instead of the fragmentation that we have seen before and has been the main reason why Libya has not descended into chaos."

On one side are the fighters loyal to Haftar, the so-called Libyan National Army (not to be confused with the country's official military, which was disbanded in the wake of the civil war). Roughly on their side as well are the Zintanis and the Qaaqaa and Sawaiq brigades, who called on Libya's parliament to quit in February.

On the other side are the Misratan brigades, who support the Muslim Brotherhood, and other Islamist allies. Al Jazeera describes the Misratan brigades' capabilities: "They are equipped with heavy weapons, tanks and truck-launched rockets and have the power to be a decisive force in any struggle between [Haftar] and Islamist forces."

With forces crystalizing on each side, the potential for violence increases. One diplomat in Tripoli said, "It could get worse a lot quicker."