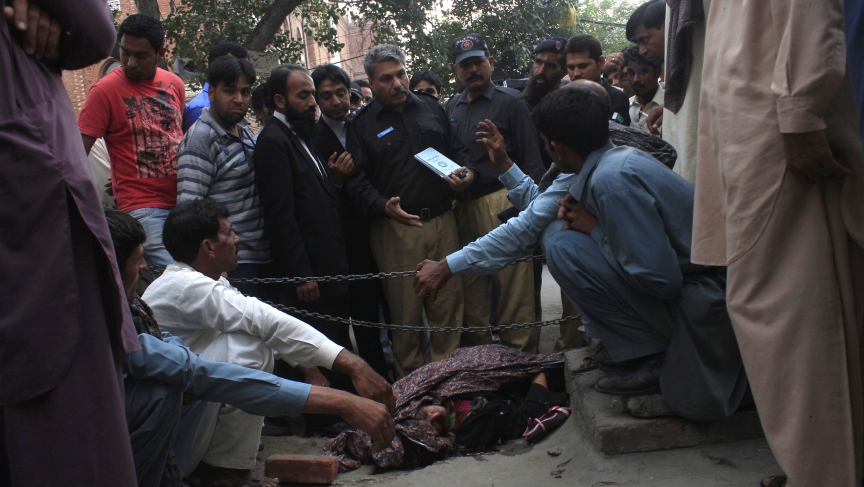 Police collect evidence near the body of Farzana Parveen, who was killed by family members, at the site near the Lahore High Court building in Lahore May 27, 2014. Parveen, 25, was stoned to death by her family outside one of Pakistan's top courts on Tuesday in a so-called "honor killing" for marrying the man she loved.

On The World, we sometimes report on some pretty difficult, and at times, depressing stories. But I guess the hope is that by covering the difficult issues, we're helping to start a conversation about what needs changing out there in the world.

We're going to try and do that by discussing a horrific attack against a woman in Pakistan. The country is a very important for the US, strategically and economically. And the issue of violence against women keeps coming up.

Writer Bina Shah has been covering the story I mentioned above. It involves Farzana Parveen, a woman in Lahore who was beaten to death by her own family after she apparently married the man she loved. Brothers and uncles bludgeoned her outside a courthouse with with bricks taken from a nearby construction site.

"It's just horrific, we just can't understand how or why this happened," she says.

Parveen had been there to testify that she had married her husband, Muhammad Iqbal, out of her own free will.

Her family said she'd been kidnapped. People allegedly stood and watched the beating. Nobody helped Parveen. Some took cell phone pictures. At the time of the beating, she was three months pregnant.

Iqbal says police stood by and did nothing. Police dispute this accusation.

In a terrible twist, reporters learned that Iqbal strangled his first wife to death in order to marry Farzana Parveen. He never served any time for the murder. The family members of his first wife forgave him. And that forgiveness is a loophole in Pakistan many use to avoid punishment.

Shah’s been writing extensively about this subject on her blog. She explains how murderers, like Iqbal, get away with their crimes against women:

"People in Pakistan get away with these kinds of executions of women because of weak laws, contradictory legislation, and the overarching power of jirgas, or extra-judicial tribal court systems which reserve the harshest punishments for women exercising their free will.

We have a Protection of Women ordinance, enacted in 2006, which amended the Hudood Ordinances, making rape a crime under the Pakistan Penal Code, and also made it illegal to force a woman to marry, kidnap or sell her into prostitution, and accuse her falsely of adultery or extramarital sex. We also have a bill, enacted in 2004, which makes "honour killing" a crime. A Punjab law minister called for the crime to be tried in anti-terrorism courts in 2011, but I'm unsure whether this was ever enacted.

However, the 2004 law against "honour killing" is contradicted directly by the Islamic law of Qisas and Diyat, which allows a family of a victim to "forgive" the criminal and lessen the punishment or forgo it altogether. Most criminals use this loophole to get away with their crime."

Shah says women's rights activists, lawmakers, and politicians are raising their voices the most. But you tend to see a divide across gender lines.

Shah does say that some men are speaking out against the "honor killings." One such man is religious leader Tahir Ashrafi. He's head the influential Pakistan Ulema Council. And Ashrafi issued a fatwa against honor killings.

"Killings committed in the name of honor or dignity are brutal and cruel. Murderers will not only be guilty of murder but also spreading mischief on earth," he wrote.

The fatwa issued against honour killings is a first in Pakistani history, as far as I can tell. Let Farzana's death not be in vain.

Nor should it. But what's at stake for a nation when this kind of hatred against women seems to be, if not accepted, hard to roll back?

Shah says you risk an entire region becoming unstable when you have an undeclared war against half of its population. She says in order to bring back stability to the region you have to look at these ongoing episodes of violence.

They are a real assault on women. You need to have these conversations. You need to pay attention to these stories, and they link to stories across the globe.

"This for me is much more important than the issue of nuclear safety and stability, or the fight against terrorism."