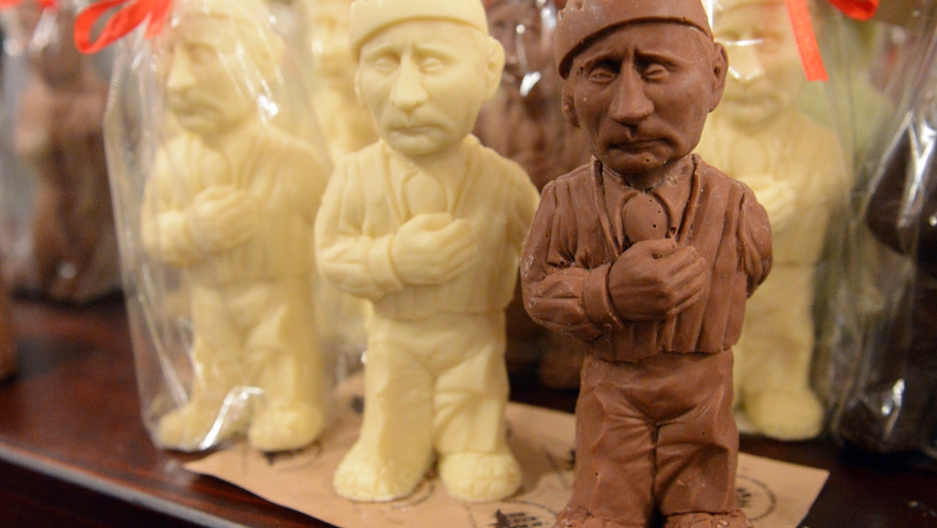 Are you still furious about Russia's invasion of Crimea? Are you concerned about the violent clashes in eastern Ukraine? Are you hungry?

Sounds like you need to bite the head off a chocolate figurine of Vladimir Putin!

In the western city of Lviv, that's now an option, thanks to a politico-culinary collaboration between the famous Lviv Chocolate Factory and EuroMaiden activist Oleh Matsekh, who designed the figure after the invasion of Crimea.

"When you buy it, you can treat it the way you perceive Putin," Matsekh said. "If you hate him, you can bite his head off. If you love him, you can lick or kiss this piece of chocolate. It's up to everyone to decide."

Matsekh sounds diplomatic. His figurine design is less so.

It's available in two forms. "Big Putin" wears a crown and is holding a bomb behind his back. "Little Putin" is dressed like Napoleon.

The tag reads, "PTN-PNH" — an abbreviation that stands for "Putin, go f*ck yourself."

For now, the figurines are only available in Lviv, but there are plans to begin selling them in other cities, including Kyiv.

Putin may be an autocrat, but he's a delicious autocrat.