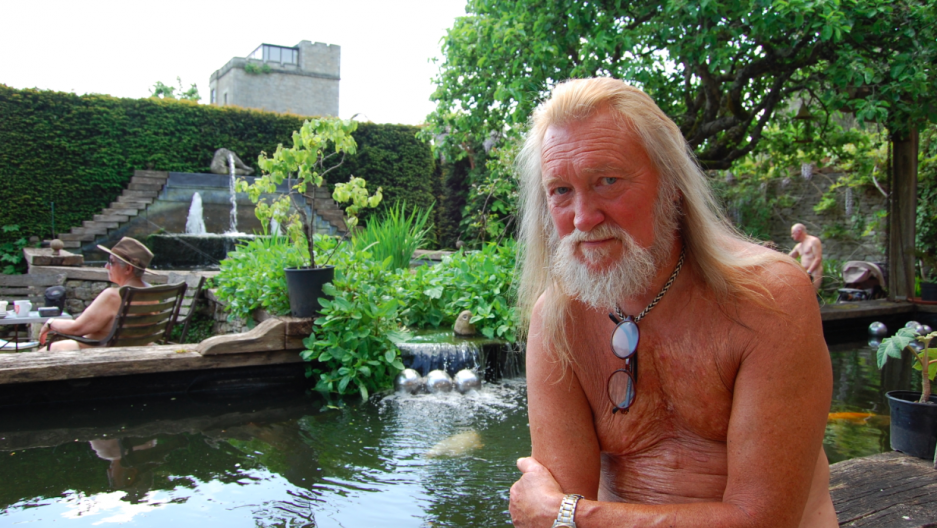 MALMESBURY, UK — With flowers in bloom and the sun gently sparkling on the River Avon on a recent Sunday afternoon, Abbey House Gardens looked like nothing so much as the Garden of Eden — mostly because everyone there was naked.

The people stretched out on benches reading newspapers and doing Sudoku puzzles were naked. The people eating ice cream and fixing themselves cups of tea at the café stand were naked. The men and women admiring the koi pond and photographing the rose collection and making polite chit-chat with neighbors on the next picnic blanket over — all of them, starkers as the day they were born.

The clothing-optional days at Abbey House Gardens, a bucolic botanic garden surrounding a private home in this west England village, are a high point on the summer social calendar of Britain’s small but dedicated community of nudists (or naturists, as they’re called here).

The crowd was a cross section of British society: farmers, civil servants, teachers and engineers, all united by their shared preference for living life in the buff.

Britain is no easy place for the naturist. The weather is so fickle that it’s hard most days to leave the house without a light jacket, let alone pants.

“One day it’s like this, tomorrow it could be winter. You learn to live with it,” said John Ablett, 60, as he and his wife Sue circled the herb garden, he in flip-flops, she in pink sandals and gold-rimmed glasses.

With temperatures in the 70s, this particular Sunday, the Abletts and others agreed, was pretty much a perfect day to be naked.

“It’s that breeze,” John said, stretching out his arms as a light summer wind rippled through the flowers.

There are a few practical concerns about spending a day disrobed, veterans said. You need sunscreen, and lots of it. Bug spray helps, too. So do a few small concessions to practicality and comfort, sported comfortably against bare flesh: baseball caps, Crocs sandals, athletic socks, fanny packs.

Ages ranged from families with young children to elderly people tooling around on motorized scooters. The crowd was mostly male, and it was one of the rare public venues with a line for the men’s restroom and none for the women’s.

For a “textile” — the naturist’s term for a person who prefers to stay dressed — the effect was of walking through a public park with a very particular type of X-ray vision.

Sunning themselves in the gardens were people of all shapes and sizes, a rainbow of nakedness very different from manicured, sculpted monotony of the nude bodies favored in the media.

Mo and Chris Thomas strolled the manicured hedgerows with cameras around their necks, sandals on their feet and nothing in between. The couple lives half the year in Spain and spends the other half traveling, mostly to nudist-friendly destinations.

The retired financial service workers have been naturists for 17 years. It was her idea first. Stripping down is a great equalizer, they said.

“If someone’s got no clothes on and you meet them on a beach or a café and get chatting, you don’t know what job they’ve got or where they’re from,” said Mo, 59.

“Nobody’s dressing up to prove their wallet’s bigger than yours,” said Chris, 58. “We’re all the same.”

Ian and Barbara Pollard purchased the 16th century former Benedictine abbey in 1994 and set to work refurbishing its overgrown five-acre grounds. The couple’s fame spread beyond Malmesbury when a BBC team came to film the work and noticed their penchant for gardening in the nude.

After the special aired under the title “The Naked Gardeners,” the Pollards were flooded with calls and emails from naturists around the country: “If you want to go down to your garden naked, can we come and do it too?” Ian recalled. The first clothing-optional day was in 2003, and it’s been a perennial fixture since.

Nudity is welcome, but not required. Signs posted at the entrances inform potential visitors that they may strip or stay dressed as they choose. Although the Thomases reported seeing a skittish group turn away at the sign, other dressed guests said they were unfazed by the fauna on display.

“They don’t mind us coming in clothes, so why not?” said John Gibson, a retired teacher from Leeds. “Go for it.”

There are a few rules of etiquette in the naturist scene. Bring a towel if you’re planning to sit. No photographing people without their consent. And no inappropriate sexual advances or behavior.

That’s the biggest misconception textiles have about naturists, Pollard said — “that they’re all screwing, all the time.”

True nudism, practitioners said, is about enjoying nakedness for its own sake, without sexual connotations. Again and again, people described life au naturel with the same word: freedom.

“You have to be conscious of the boundary between naturism and where a sexual thing kicks in,” said Keith Mitchell, 42, of London.

“That’s not what we do. That’s not what this is about. You’d be made to feel uncomfortable or asked to leave if there was a possibility that people were trying to cross that line.”

Abbey House’s future isn’t clear. The couple has recently split, Pollard said, and Barbara is seeking a divorce. The house may be put up for sale.

It’s a blow to those who have come to love the gardens as a place where they can be themselves in the company of others who also enjoy the sun on their skin, everywhere.

“It would be great if at some point in a future society, [being naked] was as socially acceptable as walking down the street,” Mitchell said. “It’d be a nice society, if that was the case.”