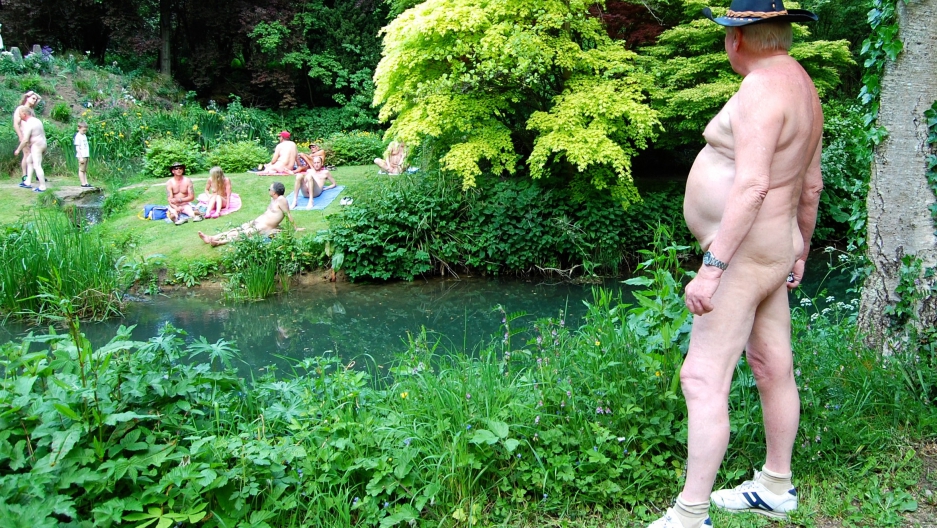 MALMESBURY, UK — At the sight of the first naked person, my heart jumped the way a safari-goer must feel upon spotting a first giraffe stepping from the mist.

I’d been psyching myself up for this on the three-hour drive from London to Abbey House Gardens, where a few hundred of Britain’s practicing nudists were enjoying a clothing-optional day. No need to be nervous, I told myself. Just maintain eye contact.

The sight of a garden full of naked people was jarring at first, as if all the people in Georges Seurat’s “Sunday Afternoon on the Island of La Grand Jatte” suddenly dropped trou.

More from GlobalPost: In Britain, naked and unafraid

I have interviewed people before whose culture called for minimal clothing. There is, however, some ineffable difference between a loincloth-clad indigenous man in the Cambodian highlands and a middle-aged Englishman wearing nothing but a fanny pack and a pair of Tevas.

But nudity becomes normal surprisingly quickly. After a while, I felt conspicuous as a “textile,” the naturist’s term for a clothed person. Not quite enough to take my dress off, but still.

Removing clothes from a social interaction creates a greater sense of openness in every way. Stop a besuited man on a London street for a quote and he’s likely to recoil, as though the mere act of speaking to a stranger is prying away an essential piece of his soul.

An octogenarian with a penis ring, I can tell you from experience, has no such reservations. I had a pleasant 10-minute conversation with one gentleman who would occasionally reach down and give his tackle a gentle tug, with no more concern than you’d give a persistent mosquito on a lazy summer’s day.

People were friendly. They were forthcoming. They were honest. I kind of wish everyone I interviewed were a naturist.

The best part about being a journalist is that it gives you license to explore the innumerable modes there are of being human. The people who answer our questions and allow us to document their lives are brave and generous. Even ways of being that seem a bit outré at first often boil down to the same understandable motivation: people just want to be happy and free.

In the case of Abbey House Gardens’ visitors, they simply find leisure activities more enjoyable when conducted in the nude. Life is just better naked.

Say you have a favorite hat. You love this hat. When you wear this hat you are the happiest, freest, best version of yourself. But for a variety of reasons, you can’t wear it in public. Every day, before you leave the house, you sadly hang the hat on its hook, leaving it and the part of you it represents behind.

And then one day you read about a place where you are welcome — even encouraged — to wear your special hat. And when you get there, everyone else has a favorite hat too! Imagine how pleased they would be, walking around, doffing their beautiful hats at each other. That’s how happy these naked people were.

“I don’t think there’s anything better than taking your clothes off in public,” a man in his 70s told me. “You feel free. Everything’s swinging and everything. I like being naked.” Then he offered to pose for frontal photographs, in case I wanted any for “personal use.”

I declined, but I applaud his spirit. Swing on, man. Swing on.