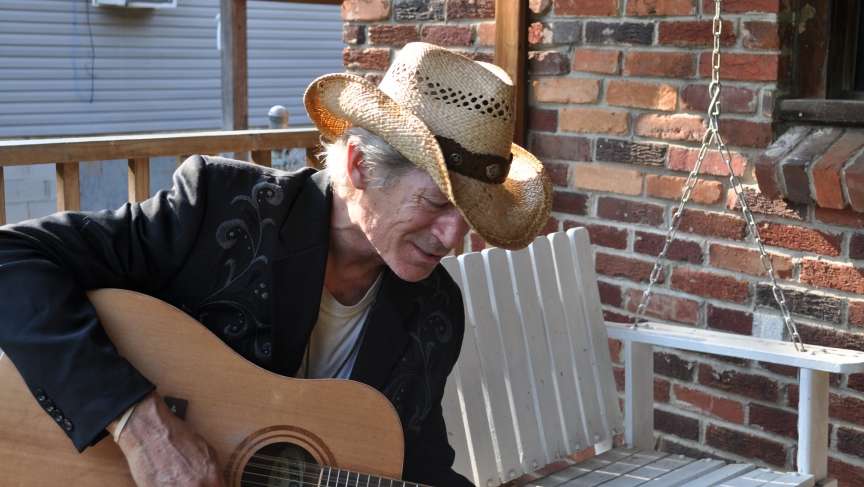 Doug Seegers on the porch of his house.

Walking down Broadway, the main drag in Nashville, feels like turning a radio dial.

From one dark bar, a woman belts out a song about heartbreak, next door, hipsters in fedoras and vests play rockabilly to a half full room, while a man on the street strums his guitar.

It feels like everyone is coming to Nashville to get their song heard and make it big.

“My name is Douglas Seegers. I introduce myself as someone who was brought up from day one on country music,” said one of the musicians I met in Nashville.

In fact, it was in downtown Nashville a few months ago, that Doug Seegers met the Swedes who would change his life.

Seegers is 62. He's wiry, with deeply tanned skin. He's been playing gigs on this street for decades. He’s often lived on the street too.

Everyone downtown knows him. And so when a Swedish television show called “Jill's Veranda” came to Nashville, a woman who works at a local food pantry suggested that he play for them.

“They asked me, 'Would you mind if we interview you?' And I said, 'Not at all, as long as you let me play a song for you.' Cause I’ll play for anybody anywhere anytime,” Seegers said. “So, I sat in the grass, against the brick building, playing the song, 'Going Down to the River.”

“And as I was singing the song, they were kneeling down about three feet away, just watching me,” Seegers remembered. “And then I started looking in their eyes and I thought something strange was happening.”

Little did Seegers know that the show – Jill's Veranda – is a big deal. And after his segment aired, Seegers' song, “Going Down to the River,” hit number one on Swedish iTunes.

All of sudden Seegers was famous.

In Sweden… but still.

“I have never talked about myself this way in my entire life, you gotta believe me,” Seegers said, “but I am famous in Stockholm, Sweden and in Nashville, no one knows who I am.”

And one of the Swedes who heard Seeger's talent was a producer named Håkan Olsson.

“The first time he performed on the TV show and it was a complete knock out,” Olsson said. “I was not the only one feeling he’s got something special in his performance of this song. It’s the combination of a good song and some kind of magical performance.”

Just how popular is Seegers’ song? Popular enough that Swedish tourists travel to Nashville to meet him and to hear him play. Sometimes they ask to play with him.

Fans have also posted dozens of videos of themselves covering “Going Down to the River.”

Seegers said it is a great honor to hear people cover his song.

“That's the best compliment for your music when other people want to do it,” Seegers said. “I don’t think it’s that special, but evidently there are people who like it, so I am going to run with it.

Doug will play 60 dates on his tour. Most of the shows are sold out. And he'll be opening at a festival for his heroes, Neil Young and Van Morrison. He even promised one fan to write and play a song at her wedding.

Olsson, for his part is still happily stumped as to why the song became so popular.

“It had that kind of effect. I am happy that we don’t know what it is.” Olsson said. “There's a lot of performing on TV shows and it’s very very rarely that it had that kind of impact that Doug had on the Swedish audience.”

As we sit talking on the small porch of a house where Seegers rents a room in Nashville, his phone rings repeatedly.

Until recently, Doug didn't have a cell phone, or a passport, or fancy clothes. He's never been on a plane before. Everything is new and that’s a lot of pressure.

And across the Atlantic the fans are waiting for him.