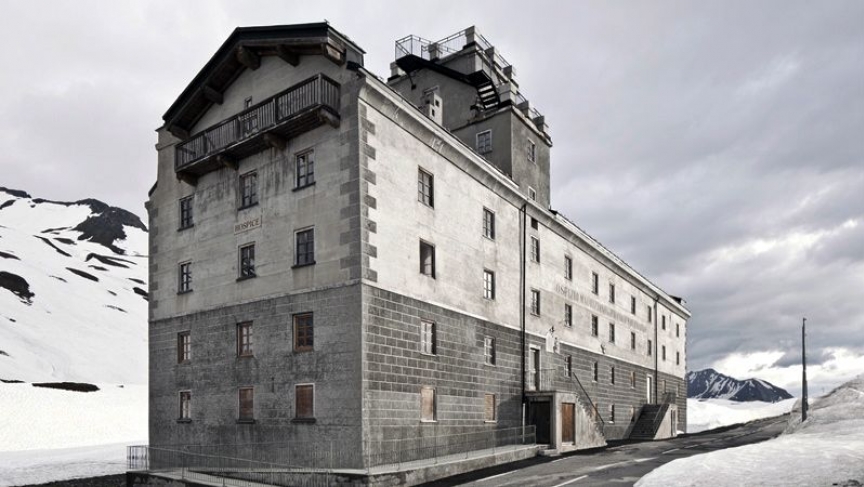 Ospizio al Colle del Piccolo S.Bernardo, Italy. Languages such as Italian ('ospizio') and Spanish ('hospicio') have words that sound like 'hospice'. But they mean something different: old people's home, poorhouse, refuge for migrants.

The Spanish-language pages of Medicare and the National Institutes of Health translate hospice as hospicio. To Los Angeles resident Manuela Flores this just seems bizarre

“Hospicio is a place for orphans,” says Flores, an immigrant from Nicaragua who has lived in the United States for nearly three decades. Spanish speakers from other countries give different definitions— to some it’s a refuge for migrants, to others a home for elderly people who have no family to support them. But whatever the variation hospicio means a place for the destitute, and definitely not somewhere you want your loved ones to end up.

Flores says until recently she had never come across the concept of hospice care, and she would not even know how to give a name to it in Spanish. In English, hospice means an end-of-life program that includes at home medical services as well as psychological and social support. For anyone who is eligible for Medicare or Medicaid, hospice care is free. But Hispanics nationwide are making use of hospice services at lower rates. Researchers have found linguistic and cultural barriers are part of the reason.

“You have patients being offered basically to go to the poorhouse to die and they say, of course I don’t want to do that,” says, Jason Bowman, a Brown University medical student who has devoted himself to studying hospice care and Hispanics ever since he took a trip to Ecuador and learned the word was being mistranslated. Bowman, working with Dr. Joan Teno, recently completed a national study that documented that the rate of whites being treated with hospice was 30 percent higher than Hispanics.

“I think it is heartbreaking,” Bowman says, “because the Hispanic culture possibly more than any other that I’ve studied would benefit most from the central themes of hospice which are quality care focused around family and friends and support, holistic incorporating religion and spirituality, avoiding invasive sterile environments like a hospital.”

The Spanish and English words for hospice have the same Latin root: hospes. In Spanish the word came to mean a home for the poor who were unable to care for themselves. In English, the concept of hospice as a service to care for the dying took off in the 1940s in Britain. It was brought to the United States in the 1960s.

Overall, hospice care in the US is growing. And people who provide the service are starting to market it to Hispanics.

Hospice of the Valley in central Arizona is one such organization that's creating marketing materials that cross cultural divides.

“It was difficult for me," a man identified as Delmar Contreras says in a video produced by Hospice of the Valley. " I was kind of skeptical of the whole idea of hospice, being a Hispanic, and we take care of our own. Me and my lady were struggling, how take care of Mami." Contreras goes on to explain that when he realized that hospice was actually the best way he could care for his mother. “It’s the best decision that I ever made. I could never take care of my mom that way.”

That’s one person who was won over, but there are millions more facing deep cultural barriers. In California, Silvia Austerlic meets with groups of migrant workers as a cultural liaison for Hospice of Santa Cruz County.

“I say that I work for hospice and I ask, 'Have you heard about hospice?' And always there are many people who never heard about the service," says Austerlic, a native of Argentina.  “I say, 'That’s great, so let me tell you.' We don’t use the word in Spanish, hospicio; we use the words servicios de hospice.”

She uses the English word to avoid confusion. Then comes the key step of explaining a new concept.

“Hospice is a program, but it’s also a philosophy,” says Austerlic. “When I say it’s a philosophy I look into the eyes of farm workers and they all nod. They understand it’s not just someone coming to your house at the end of life. It’s a different relationship with death. It’s not how you want to die. It’s how you want to live until the end.

That’s something that Manuela Flores, the Nicaraguan immigrant, wishes had been explained to her. Flores says her medical provider used the English word, but his explanation was inadequate. When her mother-in-law died less than 48 hours after her family had approved hospice care, Flores was terrified that they had “signed off on the death of la señora.”

Flores believes immigrants like her need to better informed about programs like hospice. “I am not going to return to my country,” she says in Spanish. “I am going to end my life here with all of my family. And so I need to know. Regardless if we know English, we are working here and we need to know about programs like this. There are people who have died without knowing about these programs.”

This report was supported by a California Healthcare Foundation Journalism Fellowship, a project of New America Media in collaboration with the Stanford In-reach for Successful Aging through Education Program.