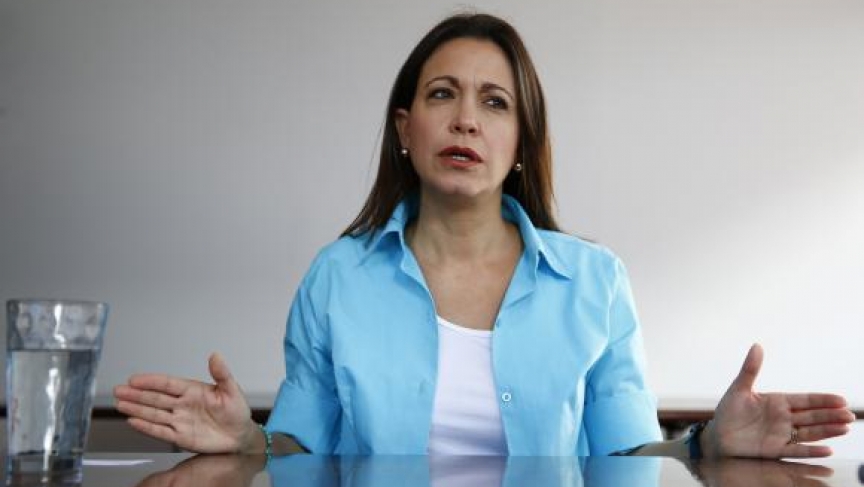 Venezuelan opposition leader Maria Corina Machado speaks during an interview in Caracas May 23, 2014.

When you're under pressure blame Washington. That's long been the playbook for the government of Venezuela, first under the late Hugo Chavez and now under his successor, Nicolas Maduro.

Well, Maduro has been under intense pressure lately with widespread student street protests. And once again, those in power in Caracas are blaming the US.

Specifically, the American ambassador in neighboring Colombia, Kevin Whitaker. Prior to serving in Colombia, Whitaker was the State Department's representiative for the Andean region.

BBC Mundo's Arturo Wallace says the mayor of Caracas, Jorge Rodriguez, laid out the government's accusations Wednesday, reading from emails supposedly written by opposition leaders to Whitaker, where they discuss how to create a political crisis to oust Maduro.

"The mayor quoted a series of emails between several leading members of the Venezuelan opposition, chiefly among the former opposition lawmaker Maria Corina Machado, in which they mention the support and even instructions from the US ambassador to Bogota, Kevin Whitaker," Wallaca says. "It's not clear whether they're referring to an alleged plot to kill President Maduro or just to the general strategy of trying to increase the pressure on President Maduro through street protests to try to force his resignation, to destabilize the Bolivian Revolution as they call it here in Venezuela."

One email mentions the need to "step up efforts" and obtain financial help to "annihilate Maduro." Wallace says that the Venezuelan government is interpreting that as an assassination plot.

"Beyond the emails, they say they have other evidence they will disclose in due time, and there is a criminal investigation underway.“ Wallace reports that Machada has denied the accusations, saying anyone looking at the text carefully would notice they're not written in her style. She calls the emails fabrications, saying the current Venezuelan government is desperate because of the street protests that have been affecting Venezuela for the last three months. The US State Department says the accusations were baseless.

Wallace says there's a pattern to these political accusations. "This is not the first time President Maduro actually denounced assassination attempts. He has even implicated the former Colombia president Alvaro Uribe, but so far none of these alleged plots resulted in any sort of formal accusation against the alleged plotters.” Wallace says this latest set of accusations is seen by opposition forces as proof of how desperate the Venezuelan government is. The government is seen as “trying to intimidate people and distract people from the real problems.”

Wallace says things might change if the charges are formally presented and a criminal investigation is launched against Machado, "but so far it doesn't seem it would go that way.” Rodriguez indicated that more evidence would be made public in the next few days.